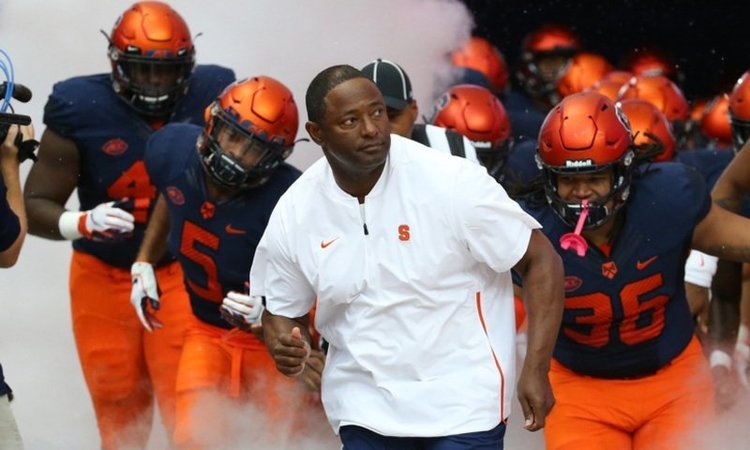 Dino Babers says Clemson has the best personnel in the conference.

Syracuse head coach Dino Babers didn’t have to answer many questions about Clemson during his weekly press conference as the local media focused on last week’s last-second loss to Wake Forest. However, when he was asked about Clemson not being very good this season, Babers responded with laughs.

Clemson enters Friday's game with a 3-2 record, including a 2-1 mark in league play, and ranked No. 25 in the AFCA Coaches Poll. The Tigers and Orange have played some memorable games in recent years and Babers knows his team squad will face another solid Clemson team on Friday night.

One media member asked about Clemson not being the same as it's been in the past, and Babers stopped him in mid-sentence.

“Wow. I went to media day. Their quarterback was bigger than Josh Black (Syracuse DT who is 6-3, 290). They have about 150 stars over there,” Babers said. “They are the top-ranked recruiting class all the time, we can't touch them, how come we can't recruit four- and five-stars over here, and now you're saying they're no good?

"That's the Clemson Tigers over there, man. C'mon. Sheesh.”

Clemson's defense ranks among the best in the nation. The Tigers are second nationally in scoring defense, allowing 12.2 points per game. In addition, the unit ranks second in red zone defense (.625).

Offensively, quarterback DJ Uiagelelei has completed 76 of his 140 attempts for 793 yards and three touchdowns. He's also rushed for 160 yards. Running backs Kobe Pace and Will Shipley lead the Tigers' ground game. Pace, who earned ACC Running Back of the Week on Oct. 4, has 218 yards on 38 carries, while Shipley is right behind with 211 yards on 44 attempts. However, Shipley suffered a leg injury against NC State and is out for this game.

Meanwhile, Syracuse's last three games have been decided with 0:00 on the clock. The Orange defeated Liberty with a last-second field goal, and they had the same done to them at Florida State. Last weekend, Syracuse took No. 19 Wake Forest to overtime before falling short in the extra frame. The 'Cuse is 3-3 overall heading into Friday's contest.

The Orange are trying to become the only team with multiple regular-season victories over Clemson since the start of the 2016 season.

Babers was again asked about Clemson and the seeming lack of talent at the skill positions.

"You mean they don't have a first-round draft pick quarterback and a first-round tailback this year, at this moment? That are both about to get drafted this year at this moment? OK, I'll agree with that,” Babers said. “I think they're freshmen. They got like a couple more years before they come out. That's Clemson over there. They're Clemson. Everybody knows what that represents."

Babers then was asked if the Tigers’ youth gives Syracuse an edge.