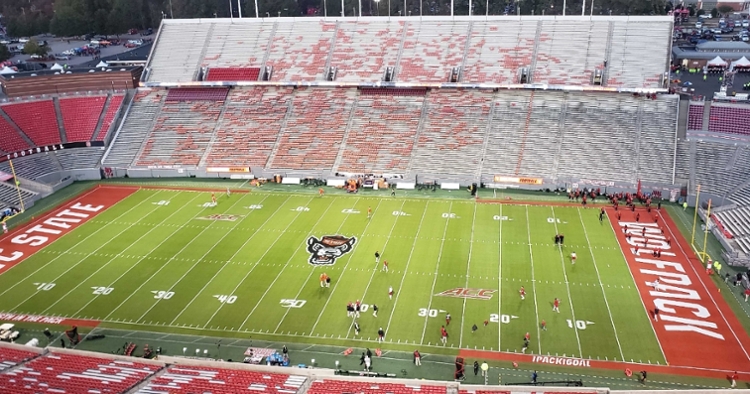 Carter-Finley will be rocking Saturday afternoon

CLEMSON – Dabo Swinney’s ears are ringing as his Tigers prepare for a loud and raucous environment Saturday.

The No. 9 Tigers take on NC State Saturday at 3:30 pm at Carter-Finley Stadium in Raleigh. The game is set for a 3:30 pm kickoff and will be broadcast on ESPN. Clemson is looking for a ninth consecutive win in the series.

Tuesday and Wednesday’s practices have been notable because of the wolf howls, crowd noise, and NC State fight song blaring from the speakers.

“Today, my ears are still ringing. We try to make it unrealistic,” Swinney told TigerNet Wednesday. “If you can function in practice with the type of noise we pipe in here during practice, if we can function that way then we can function on game day.”

Swinney said he enjoys playing at NC State and expects another great environment.

“I have always liked (playing on the road). Even when I was a player. It's us against them. You know you are in hostile territory, from the bus ride in to pregame to the game. It's one of those things that can galvanize you,” Swinney said. “I think you grow a lot in those types of games and find out where you are. It's an experience that as a competitor you always look forward to. It's a great environment. I have always thought NC State has an excellent college environment. Their fans, they show up, it doesn't matter if they're undefeated or not having a great season. Their fans are always there, and they are passionate.

“I have always had a lot of respect for NC State. It's a fun environment to go to. That's fun. Not everybody can go and a lot of your team is back. You have your travel roster, and you have to lean on each other. That's really all you've got. And we have done well on the road, because at the end of the day, the same things that win at home win on the road. If you let external factors determine your performance, you're never going to be a good team. You have to get the experience and grow from it. It will be fun to see how these guys respond.”

*The team is excited about the first true road game of the season. It’s an opportunity to play and a chance to learn. There is a lot of enthusiasm and they are ready to take it on the road and see how they do.

*On Will Shipley being close to home, Swinney said Shipley has been player of the game back-to-back weeks. He knows there are ties between Shipley and NC State, but happy for him to have the opportunity to get his first start up in Raleigh.

*On the defense being on the field so much in the second half, Swinney said it was Murphy’s Law. The depth showed up. They were able to get some guys in there that wanted to play. They didn’t back off on the defense in practice this week, they simply followed the plan. There is GPS monitoring, so the coaches know how much guys are on the field.

*Baylon Spector’s knee has held up well in practice this week.

*On DJ Uiagalelei and his accuracy issues, Swinney says he was better in the second game and then played his best against Georgia Tech. Swinney says there are a lot of new people and it’s just a matter of time before this group comes together and plays as well as they can.

*Swinney said that playing well on third down last week helped Uiagalelei’s confidence. Tigers were 9-of-15 on third down. He will put it all together as soon as the players around him play better.

*Linebacker LaVonta Bentley Has come a long way. He is incredibly consistent. He has provided leadership day in and day out. He is detailed in his work and has a sense of urgency.

*Swinney says the OL has to communicate better. Too many guys are unblocked. He says they are playing hard and playing physical and they are tough. Their effort is great. They care deeply. But they have to communicate better in some areas. Marcus Tate, it was almost not fair to him and he was put in a bad spot. They also have to clean up the pre-snap penalties. Expect the same starting five, but they want to get other guys in the game. They have eight guys they think deserve to play. He says Paul Tchio and Hunter Rayburn and Mitchell Mayes have earned the right to play and they should have played against Georgia Tech. Even Mason Trotter deserves the chance, even though he can only play right guard. Trent Howard is coming along.