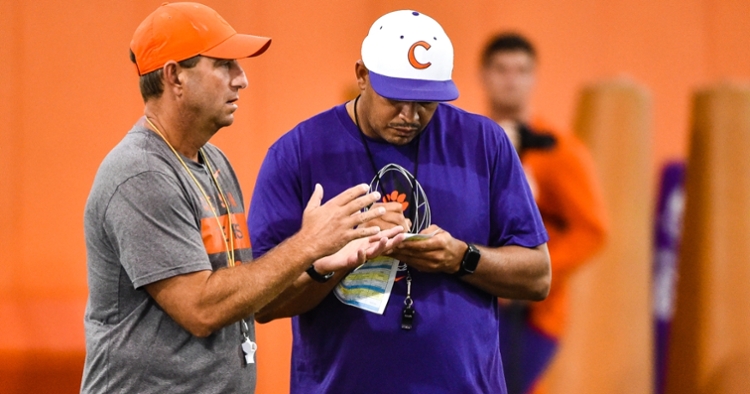 Swinney and offensive coordinator Tony Elliott have come under fire this season.

Swinney met the media following Wednesday’s practice and was asked several questions, including about the people who want to take shots at his program.

Clemson lost 27-17 to Pitt last Saturday, and during his press conference on Monday, Pitt head coach Pat Narduzzi said that Pitt tries to “do things with class” and that they enjoyed getting to go into victory formation towards the end of the game Saturday. Narduzzi was referencing the 2020 matchup against Clemson where the Tigers didn’t kneel the ball at the goal line on their way to a 52-17 victory over the Panthers.

“We try to do things with class here,” Narduzzi said. “Victory formation is a good formation. One of my favorites to end a ballgame like that with two minutes to go and no timeouts. Other people decide to do it another way than what we do. It will always come back to get you. Karma’s rough.”

Swinney said he was not aware of Narduzzi’s comments but had a message for those taking aim at his program – get the shots in while you have the opportunity.

“Well, go ahead, get it in while you can. That's all I can say. But I'm not worried about anybody outside of this program or our fan base,” Swinney said. “I really just wanted to talk to fanbase. All the outside stuff, whatever. That stuff doesn't bother me one second, I know who we are as a program. I know who the people we are here. My message is to the fan base, I know everybody's disappointed. And we're supposed to go to the playoff every year and win this league every year and have a ten-plus win season every year. But it's hard to win. And again, hopefully, we can all reset and have a deep appreciation of how hard it is, and we can't just show up to win.”

Swinney said the struggles of this season will lead to better things down the road.

“There's a lot of things that go into winning, and the margin is very small all the time, but especially with where we are this year and a lot of challenges that we've had,” Swinney said. “But the message is we have a great group of young men, a great staff, and it's been an incredible journey for 13 years. And this is one season in the midst of an unbelievable journey. When this thing ends, when this chapter is over, whenever that is, whether they let me leave on my terms or they send me to the pasture. Whenever that is, we'll look back on this year and it'll be a blessing, no question. Just like that 2003 team was just a season in the midst of a great journey in my 19 years here at Clemson. So, the biggest thing is to keep the faith and get behind these coaches, get behind this team. They're working their butts off. Everybody is. Everybody wants to be undefeated. We have to quit worrying about what we can't do, and we need to get excited about what we still can do. And that's what winners do, man.”

He then said that he doesn’t listen to his critics who wonder if he will make the changes they think he needs to make in his program.

“I don't listen to that or read that. I don't want any of that to infect my mind. I know what the issues are,” Swinney said. “The biggest thing for me is you just hurt for some of these guys. We've had as many as 18 guys (out) and we have 14 guys gone for the year. Continuity has been a real challenge. But that's reality and everybody has to deal with these things. We haven't played well offensively and that's cost us, but as bad as we've been in a position to win. But this will pay off for us and we will grow through it and it will make us stronger. It doesn’t feel good right now but it will pay off down the road.”

*Tyler Davis was on a play count last week and he ran out of plays in the third quarter, but there will be no limits on the number of plays this week. Davis, who missed a few weeks after surgery to repair a torn bicep, is full go this week.

*With Braden Galloway out, the redshirt tag is off redshirt tight end Jake Briningstool. Swinney said that Swinney is “footloose and fancy free.”

*Swinney calls FSU QB Jordan Travis a magician, said it’s hard to get your hands on him. He can put a strain on your coverage and make the throws.

*Swinney said Clemson and FSU is still a big game. "It has been for forever and will be forever. So much history between these two. It's important to a lot of people."

*He was asked about the FSU game in 2003 and if he thought the staff would have been fired if they had lost. Swinney then told a story, and said the builder of his house told him before the FSU game (FSU was ranked No. 3) that if he never got a chance to move into the house due to getting fired, he knew someone that would buy it.

"That made me mad," Swinney said. "They might have wanted to fire us, but after 9-4 they didn't have a choice, they had to give us another contract. The Swinney's moved into the house and lived there for 14 years."

Report: Former Clemson coach expected to be next head coach for JSU
Post your comments!