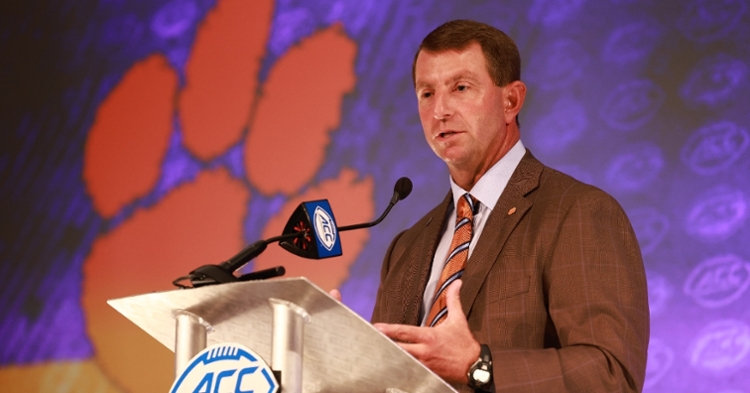 Swinney says how they have run the program to this point shows in the recent success. (ACC photo)

CLEMSON – Head coach Dabo Swinney was asked about the transfer portal during Tuesday’s press conference, and Swinney went at length about his thoughts, why Clemson hasn’t used it in the past, and how he might use it in the future.

In light of the injuries that have wracked the Clemson roster over the last several weeks – and the inconsistency and lack of depth at quarterback – Swinney has been repeatedly asked about the transfer portal, with Tuesday joining the mix.

“The weekly transfer portal question. Who's got the short stick this week? Who's asking this question next week? I wouldn't do anything differently,” Swinney said. “To do something differently, that means we wouldn't have taken one of the players took. I love the players we've got here. Injuries are part of the game. You can only sign so many players. We all get 85. That's all you get. If we were going to sign two running backs, then guess what, we signed two running backs. Should I have gone to the portal to take a veteran over (Will) Shipley or (Phil) Mafah because Shipley got hurt? I'm not. Maybe you would if you're the head coach. You can do whatever you want. I wouldn't change anything."

Swinney said the idea that he is opposed to the transfer portal has no merit.

“I am not opposed to the transfer portal. I'm not. I am not some anti-transfer portal guy,” he said. “If I were at another school or at another university, that might be all I sign are transfer portal guys, especially where I couldn't recruit some of the best kids. That's what a lot of people are gonna do, which I think is sad because I think that is gonna cost some high school kids some opportunities. But I'm at Clemson and we can sign those kids, great kids that we believe in. We're not even a year into this thing. I've said 100 times already and I keep getting this question every single week - if we need to use the portal, we'll use it. But I'm not going to do something just to do something.

“I don't know why everyone keeps asking me about it. The transfer portal has always been around. It's just been for grad guys (in the past). I just don't think there has been anybody that we would take that would start here. We'd rather take the high school kid. I think it's worked pretty good. I think we've done alright. We're not 3-2 because we haven't signed somebody from the transfer portal. I mean give me a break."

Swinney admitted that the transfer portal is a game-changer, and that if the Tigers have gaps in the roster, he won’t hesitate to use the tool. But he also wanted to reiterate that Clemson hasn't started the season the way it has because of not using the portal.

“We lost to Joe Burrow who was a transfer quarterback. So should I have taken Joe Burrow instead of Trevor Lawrence? Traded them out? That's not why we are 3-2, that's for sure,” Swinney said. “I don't regret any of the kids we've signed at all. Now, we have freshmen, sophomores, and juniors who can leave and be eligible right away. So that's a game-changer for every coach out there and will change recruiting forever. I don't see a scenario for any school that they're not going to have to deal with the portal somewhere along the way, I don't care who it is, Clemson or wherever.

“When kids leave in May and all of a sudden you have gaps in your roster, there are no high school kids to recruit in May. So you're kind of forced to have to do that. "As I have said 100 times, if we need it, we'll use it for our benefit. We'll get the best of the best and kids that fit our program. But we have not needed it at this point. If we get gaps in our roster or all of sudden we starting doing a terrible job of evaluation, things could change. I can't help guys getting hurt."