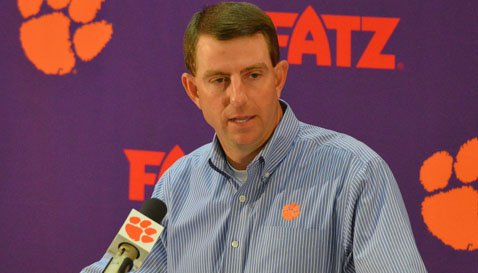 Dabo Swinney
Head Coach
View Full Profile had good news on the injury front during his pre-spring press conference Tuesday afternoon, but the good feelings subsided when he announced the four players would be suspended for the season opener against Georgia on August 30th.

“I am disappointed to announce that these young men will miss the 2014 opener at Georgia,” Swinney said. “A huge part of our program is teaching accountability, responsibility and that there are consequences for your actions. It’s really just that simple. That is a big part of what we do here. These are four good young men that I love and care about a whole lot. but they broke a team rule and as a result, they will each miss a game. I am hopeful that they will learn and grow from this and have a great 2014 season on and off the field.”

Crawford, a defensive end, and Beasley and offensive guard, were starters last year, while Peters, a defensive back, and Anthony, an offensive tackle, were key reserves who will compete for starting roles this year.

Swinney then said that he won’t sacrifice his principles for the sake of winning.

"I'd rather lose every game and get fired trying to do it the right way than to win while trying to cut corners,” he said. "You've got 120 guys and from time to time you're going to have to deal with some discipline. These four guys can come babysit my kids tonight. I love all of these guys. They're good people."

Kellen Jones
RS Jr. Linebacker
#52 6-1, 215
Houston, TX
View Full Profile (ACL) would participate in spring workouts, but would be held out of contact.

Swinney said that defensive back Mackensie Alexander is healthy and ready to go. Swinney said he watched Alexander during mat drills, said that the Florida native had no limitations.

"He's ready to go compete. Hopefully, he's kind of through his injury bug and will have a great spring. He looks tremendous. Really good to see him bouncing around without being hindered. I've probably watched him as closely as anybody this offseason. He’s special.”

Swinney said that Eric Mac LainEric Mac Lain
RS Jr. Offensive Line
#78 6-3, 260
Hope Mills, NC
View Full Profile will start out the spring at guard, but will also work out at both of the tackle positions. Kalon Davis

I asked Swinney if the moves were a result of the suspensions, and he said no. He then made it clear that David Beasley has something to prove to the coaching staff.

You can tell patience is running thin with Beasley. Swinney said he had a lot to prove even before doing whatever it did to bring the suspension.

"We think the world of him as a player, but we've got to refocus him a little bit. And he's going to have to earn that,” Swinney said. “Regardless of the suspension, he wouldn't have been first team going into spring ball. I can tell you that."

“We are going to just try to make him a great safety. That's all he needs to worry about,” Swinney said. “He's got a chance to be a great one."

Stephone Anthony
Sr. Linebacker
#42 6-2, 235
Polkton, NC
View Full Profile will be the starters at WILL and MIKE heading into the spring, and that Steward looks like he is poised for a breakout year.

“He is one of those guys that just puts a smile on your face when you see him,” Swinney said. “He probably could have played a lot more last season, but he had Spencer Shuey

Swinney said that Blanks will move to the nickel spot once he recovers, but this spring will see Korrin Wiggins

Dorian O'Daniel
RS Fr. Linebacker
#6 6-1, 205
Olney, MD
View Full Profile all getting a shot at that position. Wiggins will cross-train between nickel and safety.

Swinney was asked if he thought one of the quarterbacks could exit spring practice as the definite starter, and he said no.

"I just don't know that you can settle it in spring ball. We'll see,” Swinney said. “It depends on how these guys respond and go out and compete."

“Heart just breaks for him, but I love Tyshon Dye. I just love how he has responded. His attitude, this young man is getting a huge dose of perseverance and patience at a very young age. The best thing about Tyshon is he’s got nothing but time on his side. He’s going to recover from this, he’s going to come back, he’s going to have a good freshman year, and this time next year he’s going to be even better and getting ready to go into his sophomore year. He’s got four years left. I know everybody’s frustrated because they have all these expectations on Tyshon Dye. They want to see him yesterday, and so do I. But just support him. We’ve all just got to have a little patience just like he does. But he is going to be a great football player. I don’t have any doubt about that. His attitude is incredible. He’s one of the best students we have over at Vickery Hall. I’m just really proud of him and how he’s responded, because that’s really what life’s all about is how you respond. He has responded like a very, very mature young man. Proud of him and looking forward to getting him healthy and getting him out there so he can have some great moments in Death Valley.”

“Defensively, I’m incredibly excited about where we are. We’ve got a lot of talent and experience on the defensive side. I think we’re going to come out of this spring with some outstanding depth at a lot of positions. But we’ve got to improve in every single area, especially mentally. You look at some of our big plays we gave up last year – sometimes you give up a big play, the guy just gets beat – but it’s the mental errors that frustrate you. I thought we did a better job of tackling last year. We certainly did a better job of getting pressure on the quarterback and tackles for loss. But there’s still a lot of room for improvement if we want to be a top-5, top-10 type of defense. That’s what we want to be, we want to be the best. Really appreciate how the staff has worked to challenge themselves and lay out a good plan for spring.”