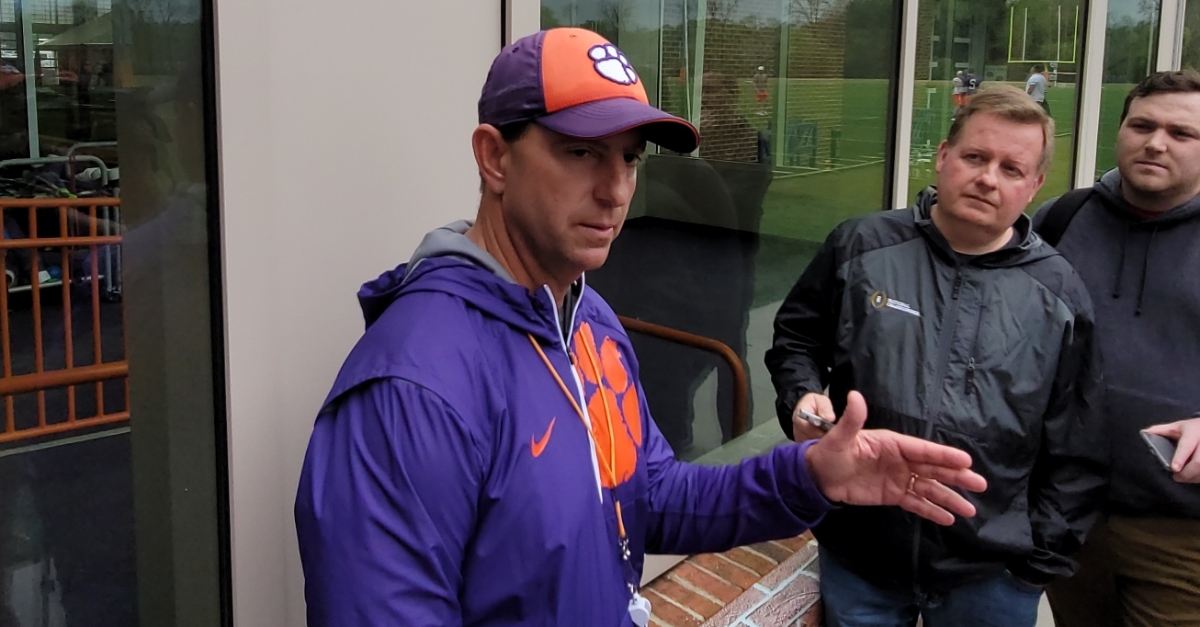 Swinney talks to the media Wednesday after practice.

CLEMSON – One Tiger fan on social media sent a message to me Wednesday evening wanting to know if we could just provide a list of starters who will be able to play in Saturday’s spring game. Indeed, with 20 scholarship players unavailable, it seems like there are more players on the shelf than healthy. But head coach Dabo Swinney doesn’t see that as a negative, he sees it as a positive.

Swinney met with the media following Wednesday’s practice – the final practice of the spring – and mentioned that wide receiver Beaux Collins had been added to the list of walking wounded (hamstring). Swinney said that Collins would be able to play next week – if there was a next week on the football schedule – but would be held for precautionary reasons.

The Tigers are already without running backs Will Shipley and Kobe Pace, tight ends Davis Allen and Sage Ennis, wide receiver EJ Williams, and offensive lineman Walker Parks, Collin Sadler, Bryn Tucker, and maybe even John Williams (concussion) on the offensive side of the ball.

The attrition has led to a number of players getting reps that normally wouldn’t see as much action, and Swinney wants to see that carry over into the spring game.

“We have had some guys that have had some really good springs and I would like to see them carry that over into that environment,” Swinney said. “We have a lot of guys that have really had to play much bigger roles this spring than maybe they have in the past. Then you split the team, and with twenty scholarship guys unavailable, it gets thin quick. 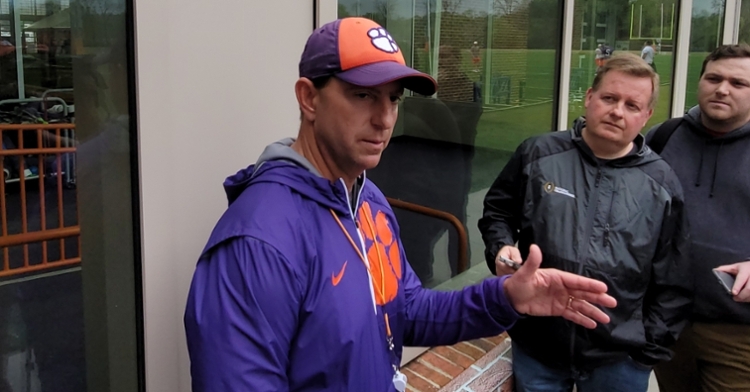 Swinney talks to the media Wednesday after practice."

Swinney said it’s beneficial to hold a spring practice in a game-type environment.

What does he want to see in the game itself? Crisp execution.

“Let’s not have a bunch of missed assignments. Guys that have not had much opportunity, that are going to get some opportunity, show that they know what to do,” he said. “Let’s go have some fun and put on a good show for the crowd.”

The expected crowd includes several recruits, and Swinney wants to make sure the Clemson faithful pack the stands and make an impression on what should be a sunny but cooler day.

“We are going to have a ton of recruits there,” Swinney said. “We have a lot of former players coming back. We have a lot of families that are going to be here. This is a huge deal for these players. That is one of the reasons why we went ahead and split the team, even though we are thin in some areas because this is the only way you can create.”