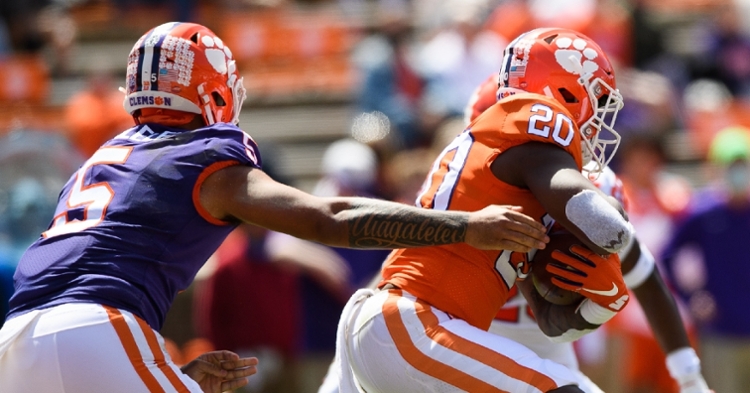 Uiagalelei and Pace were two of the standouts in the spring game. (Photo by Ken Ruinard)

Quarterback DJ Uiagalelei has a chance to be one of the best players in the nation in 2021, but he has a supporting cast that might be the envy of every other quarterback in the country. Head coach Dabo Swinney simply hopes the Tigers average 80 plays per game so all of the playmakers get a chance to touch the ball.

The Tigers enter the 2021 season without the services of former playmakers like Trevor Lawrence, Travis Etienne, Amari Rodgers, and Cornell Powell. Stepping into the breach are future playmakers with a ton of talent, guys like Uiagalelei and running backs Lyn-J Dixon, Kobe Pace, Chez Mellusi, Will Shipley, and Phil Mafah.

At wide receiver, the Tigers are hopeful that Justyn Ross will be able to return and play after neck surgery last year. Veterans Frank Ladson, Brannon Spector, and Joseph Ngata hope to be healthy, while youngsters like EJ Williams, Ajou Ajou, Beaux Collins, Dacari Collins, and Troy Stellato add to an already stacked group.

There are playmakers all over the place and Swinney is hopeful that all get a chance to touch the football.

“Hopefully, we get a lot of snaps. More first downs lead to more possessions,” Swinney said earlier this week on ACC Network's Packer and Durham. “We want to get 80-plus snaps per game. That has always been a goal for us, and we spread the ball around. It’s exciting because last year, three of our top five receivers really didn’t play. Ross was on the sideline and Ladson and Ngata were pretty much out most of the year. They had sporadic moments here and there.

“And we are getting our tight ends group and I am super excited about that. And then these running backs, this is a really, really talented group of running backs and it’s going to be incredibly competitive. I think those three positions we have a chance to be really special.”

The offense will only be as good as the offensive line, a group that struggled mightily last season, especially in the interior. However, Swinney was encouraged by what he saw out of that group during the spring.

“But the key for us will be the development up front. Last year we had five or six guys that we really felt like could win for us at a high level. We are further along,” Swinney said. “Those guys are battled tested and have scars and wounds and a little thicker skin and are a little more knowledgeable. I am excited about what we are going to do this summer and then in camp, because when it gets to September and it’s time to go play, I think we will have 10 or 11 offensive linemen I think can win for us.

"We are getting some functional depth in that OL. And we had some young guys come in this spring that got our attention and we have more coming this summer that I think can add to it.”