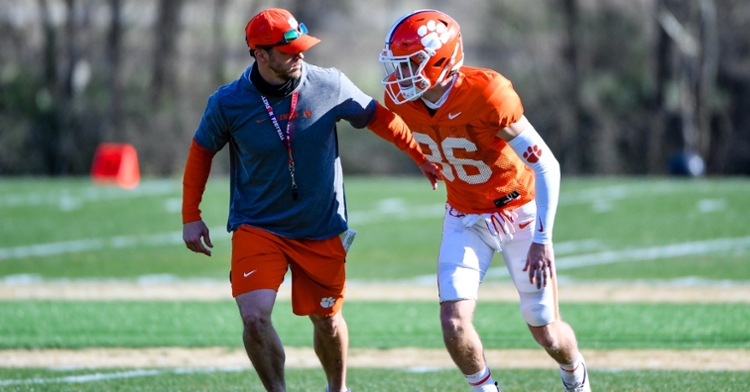 CLEMSON – The first half of spring practice is in the books and the team now takes a break from both school and the practice field. Head coach Dabo Swinney heads into the break loving what he’s seen out of his roster.

The Tigers scrimmaged Wednesday afternoon inside Death Valley, and Swinney told the media that he has turned his players loose and is hopeful his team can find its edge heading into a 10-day break.

“This was our first full scrimmage spotting the ball and playing. Very competitive on both sides. Finished up with goal line and short-yardage competition,” Swinney said Wednesday. “Other than that, it was open field, play ball. After practice, we circled everybody up and did 1-on-1s with DBs/WRs and OL/DL in front of the whole team and everybody here. Just really trying to compete like we need to and get that edge we need to.

"I really like where our team is right now. From where we started, we learned how to practice the right way, the effort, intensity, aggressiveness has really been where it needs to be. We got a lot of guys back that maybe missed a few practices. We have meetings Thursday and then these guys will have spring break and be back here Sunday the 21st. Happy these guys get a break. We'll come back and have two weeks leading up to the spring game on April 3."

The Tigers are without several veterans this spring (for various reasons), and I asked Swinney if any of the younger players were stepping to the forefront.

"When we first started, Walker Parks and Jordan McFadden weren't able to go. They are both back now and both had a really good day today. But that forced Mitchell Mayes and John Williams to get a ton of reps, way more than they would have gotten,” Swinney said. “We have had some guys at receiver and in the secondary that have really caught my eye. Man, Nate Wiggins had an interception today. He's got to get in the weight room but he's really talented and he has a chance to be a really strong contributor for us this year. Ajou Ajou is a guy that has really taken advantage of his opportunity and he's one of the most improved-- and he should be. He had a long way to go from being a truly functional and dependable receiver. The light has really come on for that young man. He's making some strong strides. I'm really encouraged by what I've seen from him.

"Hunter Helms had two or three really poor practices in a row, but he had his best day today. Good to see him create some plays today. Kind of settled in more than he was. Jeremiah Trotter really truly is about as good of a linebacker prospect as you can sign. He's a very talented young man. DeMonte Capehart really caught my eye today. Payton Page. Tyler Davis and Bryan Bresee are at another level. They are having some of their best practices I've seen since they've been here."

He also loves what he’s seen out of freshmen running backs Phil Mafah and Will Shipley.

"Oh they're naturals. They have been incredibly well-coached,” Swinney said. “They are way ahead of the curve -- just like the two freshmen receivers -(Dacari Collins and Beaux Collins) - from where a high school senior would typically be coming in here. All four of those guys have the right stuff."

He also loves what he has seen out of the corners.

"Super, super excited what I'm seeing from Fred Davis and Andrew Booth,” Swinney said. “Mario (Goodrich) has had a good spring. Sheridan Jones, man he's really playing physical. He's on a little bit of a mission. I like the look in his eye. And then this Nate Wiggins kid, he's going to be a good one. He's got to grow up, he's still got some maturing to do, and he has to really learn a lot of the details, but he's a natural guy. He has a lot to work with. Very gifted with his range, speed, he can really run. Got great length, excellent ball skills, and he's tough kid. That's one of the reasons I like to go early (spring ball) so I can get them back in the weight room and give them more time to develop. That has served us well in that past. That will be a big key for Nate."

Linebacker LaVonta Bentley is a linebacker that is making strides.

"He's been awesome. He's had by far his best nine practices since he's been at Clemson,” Swinney said. “He's grading really well. He's productive and making plays. Keith Maguire had an interception today. Kane Patterson is really developing. Trenton Simpson is a problem for anybody we play. You better know where he's at."

“Kevin Swint is one of the best pure football players we have on this team. He can play MIKE, WILL, and it's no problem at all for him to play end,” Swinney said. “We are just cross-training him at different spots. He gives us a lot of flexibility, kind of like Trenton Simpson, who gives us a lot of positional flexibility."