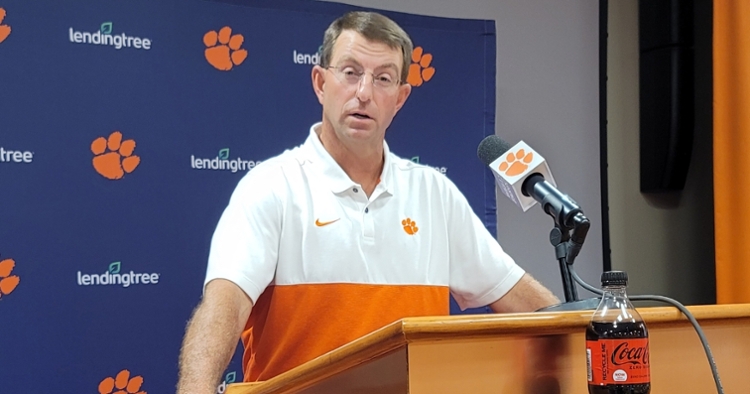 Swinney talks to the media Tuesday.

The Tigers travel to Syracuse to take on the Orange Friday night at 7 p.m. in the Carrier Dome. Syracuse lost to Wake Forest in the closing seconds last week while Clemson had the week off after edging Boston College 19-13.

Clemson ended that game without 16 members of its preseason depth chart, either via long-term injury, in-game injury, team departure or disqualification. That number also doesn't account for the absences of a number of other expected depth contributors or surprising newcomers like Will Taylor, who earned the punt return job and a niche offensive role coming out of fall camp.

Swinney said he expects his team to be relatively healthy heading to Syracuse.

“We're dang sure better than we were this time a week ago. We got better because we're healthier,” Swinney said during his Tuesday press conference. “We had more time to work on Clemson. From a staff standpoint, we had time to work hard on our crossover study. That's always a valuable tool of information for us. We just got some guys healthy and in a better place."

Swinney said freshman running back Will Shipley is off crutches but there is no timetable for his return. Defensive tackle Demonte Capehart is back at practice after his knee injury. Mario Goodrich and Justyn Ross and Frank Ladson should all be able to go this week, while Fred Davis (ankle) might require a little more time.

Swinney said the coaches know the key to winning at Syracuse – run the football to set up the downfield passing game.

"I think we will have to run the ball first. Nobody wants to be run on. if we can run, we will have opportunities in the pass game,” he said. “Hopefully that is kind of the next step. You have to win the line of scrimmage and run when people are giving you opportunities to run the ball. We have some dudes outside and a big-armed quarterback but opposing coordinators said hey let's see you run the ball and we didn't. Not a lot of opportunities downfield throwing the ball when there are eight people deep.

“Wake Forest was able to run the ball and did a lot of play-action, a lot of RPO (run-pass option) stuff and they made some plays. Same thing with Syracuse. They were able to run the ball and that creates explosive opportunities. You have to commit. You can't just sit there and play coverage when you have a quarterback (Garrett Shrader) who can run like the guy Syracuse has. You have to stop the run, otherwise you're not winning."

Swinney said the Tigers have to be efficient in stopping the Syracuse rushing attack.

“We have to be efficient holding them. We have to be effective against the run. We lost up there in 2017,” he said. “We were terrible defensively that night. We could not get off the field. We gave up 99 plays and ended up getting beat. Third down is critical. We have to get off the field. We have to win the line of scrimmage and we have to tackle. There will be some one-on-one tackles in a game like this. Their quarterback breaks tackles and gets away from people. Tackling will be at a premium Friday. We will have to be really disruptive up front."