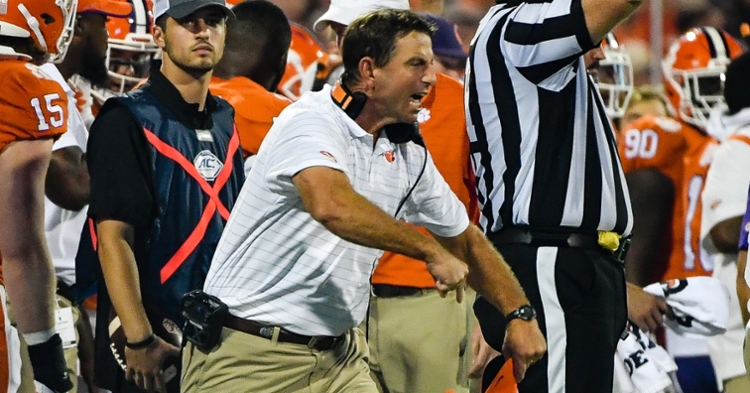 Swinney says he feels like he has a stink and the plague.

CLEMSON – Clemson’s 4-3 start is not what the fans, coaches, or players expected, and head coach Dabo Swinney says he is no longer the popular person he was just a few months ago. Now, he says, it’s like he has the plague or a stink that follows him.

The Tigers entered the 2021 season ranked in the top five and with high expectations, but a season-opening 10-3 loss to Georgia foreshadowed what has been a season-long offensive struggle. Those struggles have led to the 4-3 record (3-2 ACC), and with the hopes for a College Football Playoff dashed, Swinney has noticed a change in how he’s viewed.

"People don't want to make eye contact with me, man. Like I've got the plague,” Swinney said. “Getting a lot of 'praying for you texts.' Got random people dropping letters in my mailbox. It's like you got a stink on you and nobody wants to be around you. We are going to be fine, I promise you."

Swinney wanted to reassure everyone that he’s a better coach now than he was even a few years ago.

"We have a lot of unbelievable moments ahead," Swinney said. "This is one season in the midst of an incredible journey. We've had 13 years of a great journey. As good a journey as there's been in college football, ever. And there's a lot more to come. This is just one of those seasons. We've got a long way to go. I'm a better coach now than I've ever been, that's for sure. I'm a whole lot better of a coach than I was when I first started. Our staff is better now that we've ever been. We'll get back on track. I'm 51 years old. I have a long way to go. I have hopefully another 20 years or so.

Swinney has also seen a noticeable drop in his text messages.

"You win a national championship, it took me a month to reply to all of the text messages, just to send a fist-bump. You lose one game, you have five text messages: your mom, best friend from high school, fifth-grade teacher, your preacher. Takes 10 minutes,” he said. “That's just the way it is. People have very short memories but that's what makes this level a lot of fun. You have to take the good with the bad. Sometimes you have to go through some of that to have the right type of perspective and prepare you for what's to come.

"As I said the other night, God is good at 15-0 and just as good at 4-3. Anytime I've been in the pit of anything, God has always been up to something. I can always look back and see very necessary struggle growing pains. That's where we are. It's been a year of disappointment, transition, struggle, all of those things. There will be some good that springs from it."

Swinney finished by saying he knows his program will bounce back because his players care.

"These guys invest a ton. Matt Bockhorst, man you talk about give every ounce of everything he has and had. EJ Williams was dragging his leg around and we finally had to make him get the surgery,” Swinney said. “We've got a bunch of guys like that, man. They care. They take pride in the Paw, in this program. Tyler Davis, he was mad that we had him on the pitch count and he ran out of plays in the third quarter and we took him out. He wasn't even going to play. But Wednesday night, he wants to play. He talked his ways into some plays and that was it.