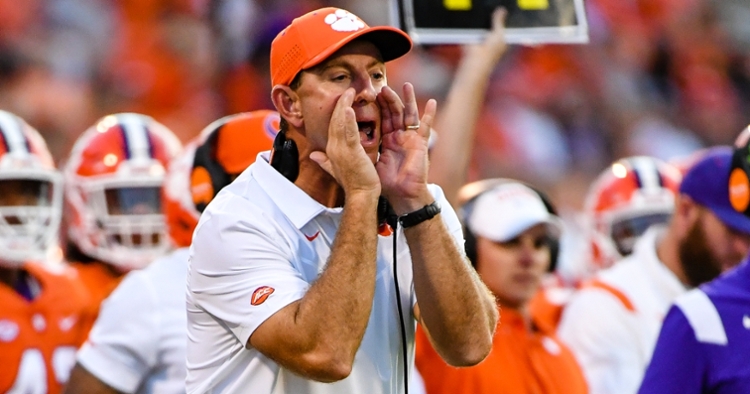 Swinney says the entire offense has to play better.

Clemson head coach Dabo Swinney met with the media Sunday evening, and the big topic of conversation was the lack of offensive production in Saturday’s 14-8 victory over Georgia Tech. Swinney acknowledged that offensive miscues were a big reason for the 285 total yards of offense and 14 points.

Clemson travels to NC State next Saturday (3:30 pm, ESPN) and Swinney said the execution will have to be better if the Tigers want to leave Raleigh with a win.

"We have to cut out critical penalties first. We had a couple jumping offsides, we didn't snap the ball one time. There are some fundamental things where we’re not turning guys loose, getting to the second level and picking up the twists,” Swinney said. “We have two games in a row with no sacks, so that's a positive. A lot of positives, but the offensive line has to be the most cohesive group on the team, truly. We're bringing some guys along who are going to be good players.

"First thing we have to do is cut out some of the mistakes, missed assignments. Those are all very correctible things. What's frustrating is that we're not seeing these things in practice. We want to transition this to game day. Saturday was a weird day. We prepared zero for what they did defensively. That created some anxiety for a young guy like Marcus Tate. All of a sudden it's not what he practiced for and it took him a while to settle in."

Only five offensive linemen played in the win, and Swinney said the coaches have to do a better job of developing depth in game situations.

"We've lost three big-time depth guys - Dietrick Pennington, who will be a great player, Tayquon Johnson and John Williams,” Swinney said. “All of those guys were going to help us this year. We have to play more guys. We got into that last year. Mason Trotter broke his hand. We just got him back, but he can only play right guard. We need to get Hunter Rayburn going, too. There just weren't a lot of plays yesterday. That's on us as coaches. There weren’t a lot of plays and they didn't get their opportunities. But we as coaches have to do a better job of that.”

Swinney was asked how he walks the fine line between being too hard on young players while also keeping their spirits up.

"This is a developmental game. We have good players. Last week, we had a great week of practice. We saw so many great things,” Swinney said. “All of a sudden you get in the game and it's very different. We have to make sure one mistake doesn't lead to two more. What's real. What's not real. We want to keep them focused on what we have to do to get better. You don't want to kill their spirit. This is our team. These are our young guys.

"I go back to Chandler Catanzaro. His freshman year he was 57% on field goals, but he left here as the school's leading scorer. Our players really, really care. They're coachable. They're humans. They're not video game people. We have to help them. You don't want to kill their spirit. This is the best we've got. It's kind of where we are right now. We're growing each and every week. If we can cut out some of these critical mistakes, we can make a lot of progress. Critical errors are costing us in critical situations. We challenge them but we do it in a positive and constructive way. We have some guys who are just growing into their roles and learning a lot of football on the run."

I asked Swinney his assessment of the play of quarterback DJ Uiagalelei.

"He continued to get better. He had two balls on the ground. He was 18-of-25, probably his best day from a percentage standpoint,” Swinney said." He missed three throws that I can remember and if he hits those it’s a different game. I was proud of his toughness, his heart and will to win and what we had to do to win that game, he made some great plays, some great runs that sparked our team. He showed great heart and great leadership. It's everybody around DJ, too. They have to improve. DJ has prepared every day. It's just a matter of time before he puts it all together and has the type of game we know he's capable of having."

Making adjustments on the fly is harder with a younger group of players.

"It depends on the makeup of your team. If it's a team with a lot of young guys, it's more of a challenge. What they showed us defensively, we only saw it in their game with Central Florida last year,” Swinney said. “They haven't used it against any other team since. You spend all week practicing for something else. It's different for everybody - the backs, the quarterback, the offensive line, the receivers. I was proud of the staff and the guys for hanging in there. We just didn't finish some of the drives. We were efficient on third down but messed it up ... critical penalties and missed opportunities. It almost cost us big-time."

As for the vertical passing game, Swinney knows it has to get better because defenses will copy Georgia Tech.

"You have to get into rhythm. You're not going to throw deep balls when they're dropping eight or the middle of the field is in robber coverage,” Swinney said. “You have to run the ball and play-action them and manipulate their backers some. That's what we did and that's why we won the game. We made the adjustments. Their philosophy was they weren't going to give us the big play. They were keeping everything in front, giving up the run and forcing us to be patient and methodical. You can better believe we will work on that. Because we'll see it again, for sure, but we'll be more prepared."

"They are an excellent team. They had 10 of 11 back on defense and lost two key players,” he said. “They're a veteran group. Same thing on offense. Their offensive line is a good group. We all know that's a tough place to play. We're going to have to play our best game and we're a long way away from playing our best game to this point. Hopefully this will be the week."