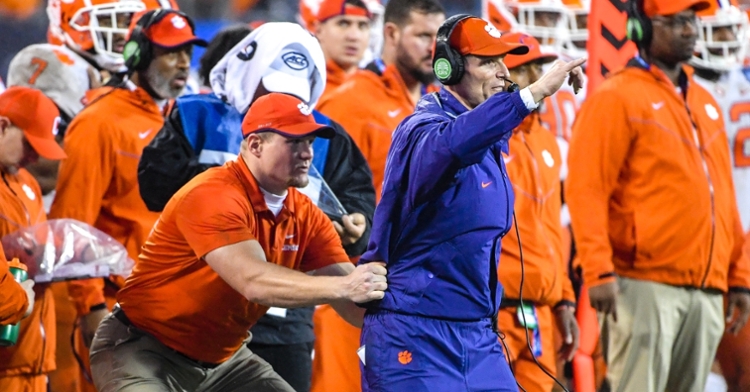 Venables has been offered other jobs but feels valued at Clemson

Clemson head coach Dabo Swinney loves it when he sees other programs pursue his coaches and support staff because he knows that’s because other teams want a small part of the special things that are happening in Tigertown.

Since the loss to Ohio State in the Sugar Bowl, offensive coordinator Tony Elliott has been linked to jobs at Auburn and Tennessee and a few in the National Football League, while Venables was mentioned for the head coaching job at Auburn.

For Swinney, it’s just what happens when you have a successful program.

“That is every year. That is just kind of the norm. We have got a great staff and some of those guys have had some opportunities that no one even hears about,” Swinney said. “There have been a few that never got public, and that is something that if you're in my position you deal with every year. I think that's a great thing. That means I've got a great staff and I am doing a good job of hiring the right people and developing those guys and equipping them to where other people are interested.”

Because Clemson is a special place, it has to be a perfect fit when a coach decides to leave.

“It was an interesting year. You know, Brent with Auburn and Tony with Tennessee, and there was a couple of other things out there,” Swinney said. “But we've got a good group and this is a place that people love. Nobody is going to just pack up and roll out of here unless they feel like it is the right fit for them and the right time. That just hasn't been the case to this point. The good thing is that when you have to go through those things, it's good for both ends. I think it's good for Tony, for example, to have to process what he would do if he took a job and kind of plan. But it's also good for me to be prepared. Eventually, that day will come and we will have some turnover.”

Swinney did see several members of his support staff earn jobs in January.

“We did have a lot of turnover on our peripheral staff with our support staff and I love that. I think that is awesome because I love to see guys get jobs,” Swinney said. “Terry Bowden got the job at UL-Monroe and he was able to take a couple of my young guys and some GA's and some support guys. I just think that is awesome. I had another guy get a chance to go down with Jeff Scott as his running backs coach. Chansi Stuckey, who had been back with me for a couple of years, he got to go to Baylor. And I think that's awesome for a couple of reasons. You want to help develop and help create opportunities for those guys. But it also gives me an opportunity, because I have a list, a long list because we haven't had a lot of turnover, to bring in some new guys and give them a chance to further their careers.”