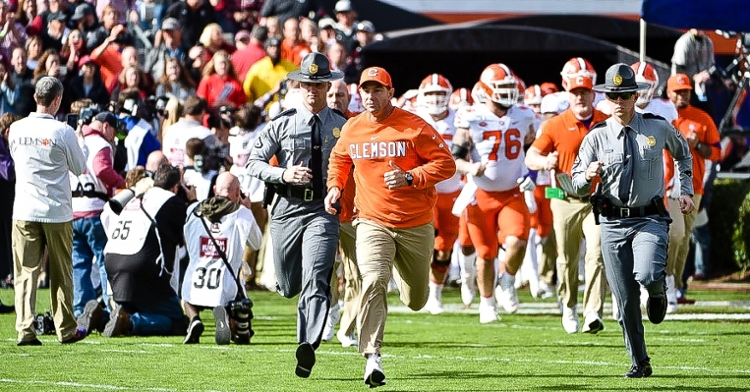 Swinney has coached quite a few games in Columbia now.

CLEMSON – The campuses of Clemson University and the University of South Carolina are vastly different, as are the respective cities in which those schools reside. And chances are if you really like one, you won’t like the other, according to head coach Dabo Swinney.

Clemson sits in the foothills of the Upstate, with the waves of Lake Hartwell reaching its grounds. South Carolina sits in downtown Columbia, surrounded by one of the largest populations in the state.

As a result, the two football programs don’t go head-to-head for many of the same prospects, in large part because Clemson’s success requires a higher-caliber athlete but also because of the environs of both places.

“Earlier when I first got here, I felt like we had a little more competitions but really very few (now)," Swinney during his Tuesday press conference. "We're very different, it's different places. Obviously just the environments and things like that. If you love Columbia, you're probably not going to like Clemson. If you love Clemson, you're probably not gonna like Columbia. They're just very different, they offer different things. Both great, offer different things."

Both schools have to recruit in South Carolina, a state not known for its wealth of high school talent each season. As a result, both schools have to reach out of state for the majority of their talent. For out-of-state kids, it becomes about what the school has to offer and what they’re looking for in a football program.

"Then we both have the same issues when it comes to our recruiting base," Swinney said. "This is a small population when it comes to football players. Atlanta has got more people than the whole state of South Carolina. Then you throw in, you got to be able to win in the SEC and ACC. You got to be good enough a player for that level of competition. And then you throw in position needs, academics, fit, all that stuff, that pool gets even smaller."

Many prospects in the state, however, grow up with family ties for one school or the other, giving that school an edge in the recruiting battle.

"When you're in a state like this with no pro sports...and it's two great colleges with a great rivalry, Alabama-Auburn, Clemson-South Carolina, a lot of kids grow up one way or the other," Swinney said. "So I mean if a kid grew up, and he's Clemson and we offer him, I mean, it's an uphill battle, and vice versa. If your kids growing up South Carolina, and they offer him it's every now and then you'll have a situation where that could go either way but usually not."