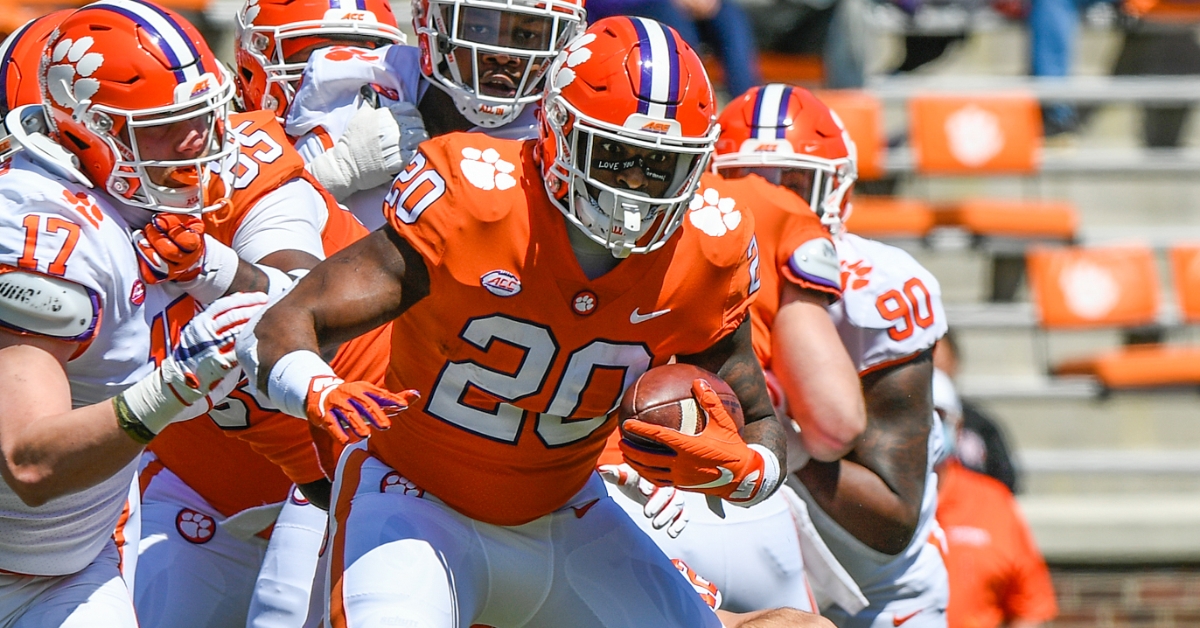 New Clemson running backs coach CJ Spiller won’t have an easy decision to make when it comes time to choose a starter next fall, something that head coach Dabo Swinney hopes happens.

The Tigers completed spring practice with the annual Orange and White Game last week, and second-year player Kobe Pace was impressive, the veterans held steady, and freshmen Will Shipley and Phil Mafah impressed.

Spiller has the spring tape to watch, and then he will have all of fall camp to decide who takes the first snap against Georgia on Sept. 4th in Charlotte.

Swinney was asked if Spiller will face a difficult decision.

“That would be great. I hope it is hard,” Swinney said of that call Saturday. “We like it when it is hard and very, very competitive. We got a bunch of talented guys. That makes everybody better.”

Pace had the hot hand early and led all rushers with 69 yards on six carries, and Mafah scored the game-winning touchdown, a four-yard run with 1:58 to play in the game. Mafah finished the day with 38 yards on his six carries.

“We are blessed with these young men that we have at running back,” Swinney said. “We love these guys. It is a very talented room. It is a deep room. It is a competitive room. We got a lot of similar and unique skill sets and you saw all of that on display today.”

Shipley had six carries for 13 yards and added a nine-yard reception. Lyn-J Dixon ran just four times for 25 yards but did have a 21-yard scamper. Chez Mellusi ran five times for 10 yards, Darien Rencher had two for seven and Michel Dukes three rushes for four yards.

“All of those guys can make plays for us. That is definitely one of the deepest positions we have on the team and one of the most competitive,” Swinney said. “We got a chance to be a pretty special group.”

Swinney said he likes what he sees out of Shipley.

"You can go all the way back to C.J. Spiller to see how we like to utilize running backs. This kid is coming in with complete foundation,” Swinney said. “It’s very natural for him. He can run between tackle or on the edge. He’ll be a complete player early in his career with the Tigers.”

The Tigers finally have stable of bigger backs.

"(The running backs) are biggest we've been in that room for a while," Swinney said. "We got some big dudes, man, that's for sure. I mean Mafah is a natural big kid; he's smooth. Shipley's got great size, and Kobe is a grown man. None of those guys are little; I mean, they're all put together. Chez is put together, Mikey Dukes is a big strong physical kid, so it's a really, really good group."

Swinney said he is confident that Spiller will make the right decision.

"(C.J. Spiller) has great knowledge, a lot of confidence in what he's doing," Swinney said. "(Spiller) is 33 years old now, and he's well prepared to do what he's doing. He's had a vision for this for a long time. I don't think he knew when that time would come, but he said he'd had a vision for what he wanted to do, And it's just it's been awesome."