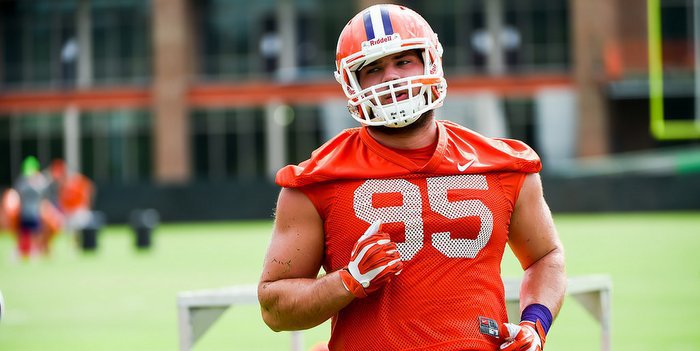 Cervenka moved to the offensive line for Monday's practice

CLEMSON – Gage Cervenka had a storied career as a wrester in the prep ranks in South Carolina, and the qualities that made him a great wrestler are the same qualities that head coach Dabo Swinney hopes make Cervenka a great offensive lineman.

Swinney announced Monday that Cervenka – who came to Clemson as a defensive lineman – moved to the offensive line during Monday’s practice. It’s a move that Swinney likes.

“Cervenka has moved over to OL. He's excited about that and some am I,” Swinney said after Monday’s morning session. “It was his decision to make the move. He came to me yesterday afternoon and wanted to meet with me. We talked through it and that's what he decided he wanted to do, so I'm really excited about that. I think that's the right move for him long term. We'll try to work with him and see if we can teach him how to play center and guard. We started that process today and I'm excited about that.”

The coaches broached the subject of a move back during the spring, but Cervenka opted to give tackle another try. However, his chances at playing time are blocked by senior Carlos Watkins, junior Scott Pagano, sophomore Christian Wilkins, freshman Dexter Lawrence, sophomore Albert Huggins and sophomore Jabril Robinson.

Swinney said Cervenka chances of playing earlier are on the offensive line.

“I don't have any doubt that it's going to work out. Gage Cervenka is a heck of a football player,” Swinney said. “He would've played at defensive tackle for us at some point. He was just going to have to be really patient over there. He's a redshirt freshman and he's got five or six guys that are just better than him right now in front of him. There are only so many reps. I think he's got a chance to be a great offensive lineman. I think this is the right move for him, our team and his future. I really do. I may be wrong and if I am it's like I told him - he's not going to forget how to play d-line. We'll roll him back over there. I think he sees it and feels the same way.”

Cervenka was one of the top wrestlers in the state and was a four-time state champion. He lost only one wrestling match (199-1) in his career, and that loss was his freshman year. He is the only four-time state heavyweight champion in South Carolina history, and it’s those attributes that Swinney thinks will make a good offensive lineman.

“Absolutely. Gage is a tough player. I think his strengths as a football player are going to be accentuated in the offensive line,” he said. “His strengths are: just raw strength, pushing and moving people, leverage. Those are things that I think will really shine through. He just looks different over there.”

Former defensive tackle Tyler Shatley made the same move prior to his junior season, and the move worked out – he’s vying for a starting job with the Jacksonville Jaguars this season.

“When Shatley moved over there - he was a good d-tackle and a fourth-year junior before he moved to OL. Cervenka has four years left, so it's a totally different deal, but I think had he stayed at d-tackle he would've been a similar player to Shatley as a solid d-lineman,” Swinney said. “Making that move now bodes well for his future. I would say that if Shatley had've been at OL for four years he probably would've been drafted instead of a free agent.

“He's going on his third year and vying for a starting job with the Jaguars. Sometimes that's part of it, just getting guys on the right seat of the bus. We do that with lots of guys - T.J. Green, Vic Beasley was a tight end and linebacker and we gave him a shot at defensive end and the rest is history. Eric Mac Lain, we moved him inside and he became a great player for us. That's all part of it as we go through the process and watch these guys mature and develop.