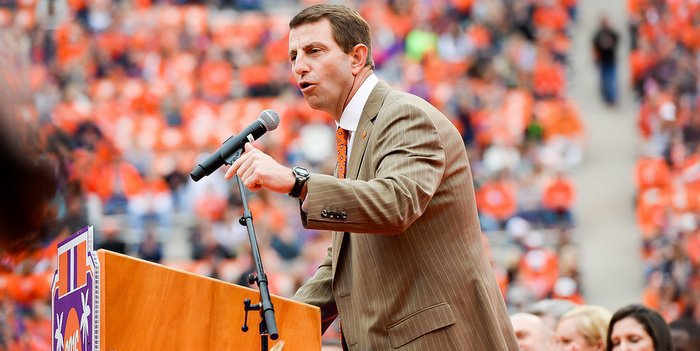 Clemson head coach Dabo Swinney’s desire to add a 10th coach to his staff might have to wait until 2018.

Swinney’s hope – and the hope of college coaches around the country – was that a 10th coach could be added in the spring.

Swinney dealt with the loss of two coaches in a short amount of time – longtime defensive tackles coach Dan Brooks announced his retirement shortly before defensive ends coach Marion Hobby headed to the NFL. Swinney moved quickly and brought in Mickey Conn, who will coach in the secondary.

When Hobby left, Swinney once again moved quickly and hired Todd Bates to coach the defensive line. Swinney hoped to add another coach in the spring.

While the NCAA’s Division I Council is still expected to approve the addition of a 10th coach for FBS programs in April, a proposed amendment presented Tuesday would change the date teams can hire a 10th coach until January 2018.

"There are many concerns with the timing of the current immediate effective date,” the Football Oversight Committee’s amendment reads. “An April effective date is in the middle of the budget year for the membership and is late in the hiring period for a football staff. If the effective date is amended to occur to the conclusion of the 2017 football season, member institutions will have the opportunity to budget for the addition of a full-time countable coach and associated costs related to recruiting. In addition, a delayed effective date will better fit the hiring timeline for a football staff and will not require readjustments following the spring practice period."

The proposal will have to be approved by the council in April to pass.