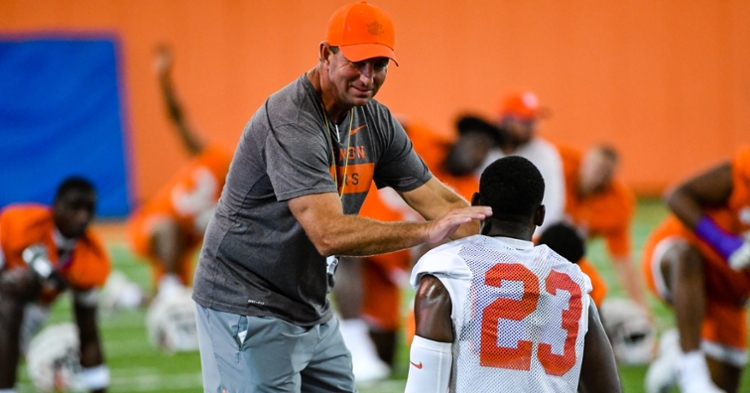 Swinney likes what he's seen out of his team in August camp.

CLEMSON – Head coach Dabo Swinney likes his team, and his team likes each other.

The Tigers will wrap up August camp with a Thursday scrimmage, take a few days off, and then start off their normal season routine Sunday with the season opener against Georgia just a few weeks away. Swinney said it won’t be long before preparations for the Bulldogs begin.

"We'll start a little bit of opponent prep on Monday and Tuesday," Swinney said of next week's plan. "Still working some Clemson as well and then Wednesday will be a staff day for us. Thursday, Friday, Saturday will be all game prep. Then obviously you've got your game week. We've done a lot of work all summer so it's not like we just wait and start (prepping for Georgia). We've done a lot of staff work but from a team standpoint, you're going through camp, it's about getting ready for your season."

Swinney said he likes what he’s seen out of his team during camp.

“The biggest thing is they are together. This is a team that likes each other and they will go compete. They will compete. That practice physical,” Swinney said. “I think they are a focused team. Those are the things that excite me. We are a talented team and I think we all know that, but having the right leadership and the right focus and the right commitment, the right attitude, and the right character are the intangibles that we will need if we want to have the season that we want to have.”

“Our running back room is really good. I love those guys. I think we have a great group. We have a couple of true freshmen in Will Shipley and Phil Mafah that are going to be great players, and every single day is a learning experience for them. Kobe (Pace) is a true sophomore. He doesn't really carry himself that way, he kind of carries himself as a more seasoned veteran. That is how he goes about his business. Lyn-J has a ton of experience around here and we all know what he can do. Mikey Dukes got a little later than the rest of these guys and he wasn't in pads today. He is still in his acclimatization period. Mikey is a guy that has missed out on some early opportunities but we will get him back rolling. And Rencher is a savvy veteran as well. So we have a really good room, I am confident in all those guys and I think we will be able to have some explosiveness and some guys that can do some things in the passing game.”

“He's a baller. He is a great player, but he's still a young player. He obviously made some great strides for us last year. I think he has had a great camp. We notice him all the time. You would like to see him more detailed in certain areas but he is one of those guys that covers up mistakes Just a tremendous young prospect that will keep getting better.”

“He has had a good camp. One of the reasons that we try to script practice the way that we do is to really challenge the quarterback because he has to manage the game. It's not fair to expect him to do certain things if you don't expose him to those things in practice. We have a good plan as far as how we've gone about our installation and the scripting of practice. He is a great leader and everybody has confidence in him. He makes others around him better. He loves it. He loves to compete. He loves to compare and obviously he has a great skillset to go with it. He has had a great camp but like everybody else is grinding every single day to get better.”