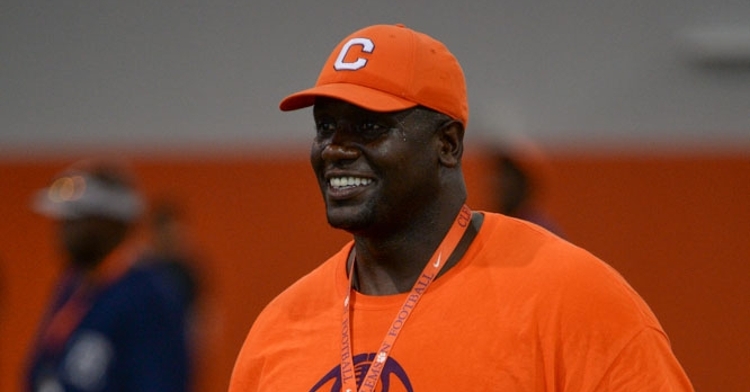 Nick Eason could be the shot in the arm the defensive line needs.

How many baseball metaphors can we fit into one football article? More than one.

I wrote that Swinney needed to hit a home run with the new hire, that simply moving someone up from the ranks might satisfy some, but from a perception standpoint (and for recruiting purposes), this had to be a solid hire. Swinney knocked it out of the park with the hire of Eason. A grand slam. Went yard. A dinger. Big fly.

Eason played four seasons for Clemson, starting 35 games and totaling 153 tackles and 15 sacks. (He also earned an undergraduate degree and a master’s degree). He was selected in the fourth round of the 2003 draft by the Denver Broncos and was in the NFL for 10 seasons with four teams. He won a Super Bowl ring with the Pittsburgh Steelers in 2009. Eason finished his NFL career with 132 tackles, nine tackles for loss, and 7.0 sacks.

That alone gives Eason instant credibility with recruits – he’s been at Clemson and taken his game to the next level.

Eason then coached the defensive line for the Cleveland Browns, Tennessee Titans, and Cincinnati Bengals from 2013-20.

“I know what it takes. I’ve been there,” Eason told Auburn's school website earlier this year. “I’ve played collegiate ball and in the NFL at a high level. I’m excited to be able to pass on that information to my room. They’ve become more of a brotherhood. It’s not about your teammates, it’s for your brother. That’s when you become special. That’s how championship teams are built.

“It’s really about mental and physical toughness, competing and being unwilling to be defeated in anything you do. It’s about refusing to lose and being resilient and relentless. Tough and relentless are the top two things I want my guys to be. If you show up, care about what we’re doing, and repeat that every single day, we’ll win a lot of football games.”

Eason has also shown that he carries the same philosophy as head coach Dabo Swinney and cares about his players as humans more than he does about what they can do on the field.

“My philosophy has always been, players don’t care how much you know until they know how much you care about them as people. That’s where it starts.”

And let’s face it, Clemson’s defensive line recruiting needs someone to start a rally (another baseball metaphor) because there are no defensive line commits for 2022, and there hasn’t been a 5-star win in that room since Myles Murphy and Bryan Bresee back in the 2020 class.

That’s why when it was announced that Bates was leaving my first thought went to the recruiting side of things. Someone needs to step in and take what’s gotten stale and breathe a little life into it. Eason has the right message, the same message that Swinney presents.

How close is it to being done? My closest source told me it was “not officially done, but we’re up 28-0 with two minutes to play and the other team is out of timeouts.” That source also said this has a chance to be a “significant upgrade at a spot that needed one.”

That’s all I need to know. Soon Eason will step to the plate and take his cuts and we will see how he does.