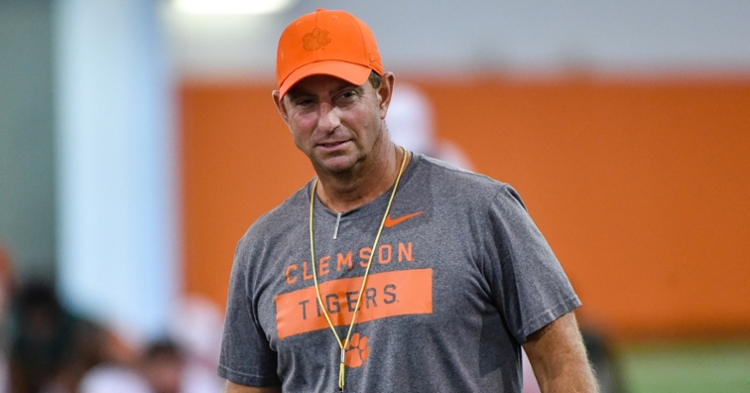 Swinney knows the environment can get rowdy in Columbia.

CLEMSON – One more practice remains before the Palmetto Bowl against South Carolina.

Clemson practiced for two hours on the practice fields outside the Reeves Complex Wednesday afternoon and will hold a final practice Thursday before breaking for Thanksgiving. The Tigers will head to Columbia Friday for Saturday’s 7:30 pm kickoff against South Carolina in the Palmetto Bowl.

Clemson is aiming for a 7th consecutive win in the series. The game will be broadcast on the SEC Network.

*Swinney said the Tigers are getting better, health-wise. “I wish I could tell you 100 percent," he said. "We're better."

Quarterback Taisun Phommachanh is showing progress while the status of wide receiver EJ Williams is still up in the air.

“Taisun was ready to go last week if needed but would’ve been really limited. I think he’s a little better. (Freshman walk-on) Billy Wiles and Hunter (Helms) have done a great job, have gotten a lot of work as well. E.J. is just, again, day-to-day.”

*Swinney said he has not heard from former South Carolina head coach Steve Spurrier this week, but the two will catch up the College Football Hall of Fame in Atlanta in two weeks.

*Swinney was asked about the atmosphere at Williams-Brice, and he said he has fond memories of some of the games down there. He especially remembers his first game in 2003, a 63-17 Clemson victory. He also said there are some memories he would like to repress.

“I've got a lot of great memories. I've got some bad ones too,” he said. “Appreciate you not asking about those."

*The fans at South Carolina have been known to throw everything from batteries to water bottles to urine at Clemson players, coaches, and personnel, and Swinney said he hopes there won’t be any of those actions this time around.

"I hope everybody will enjoy the game and we won't have any stuff like that. Nobody wants that. I'll let the people who are in charge of that worry about that,” Swinney said. “I'm just worried about getting our team ready."