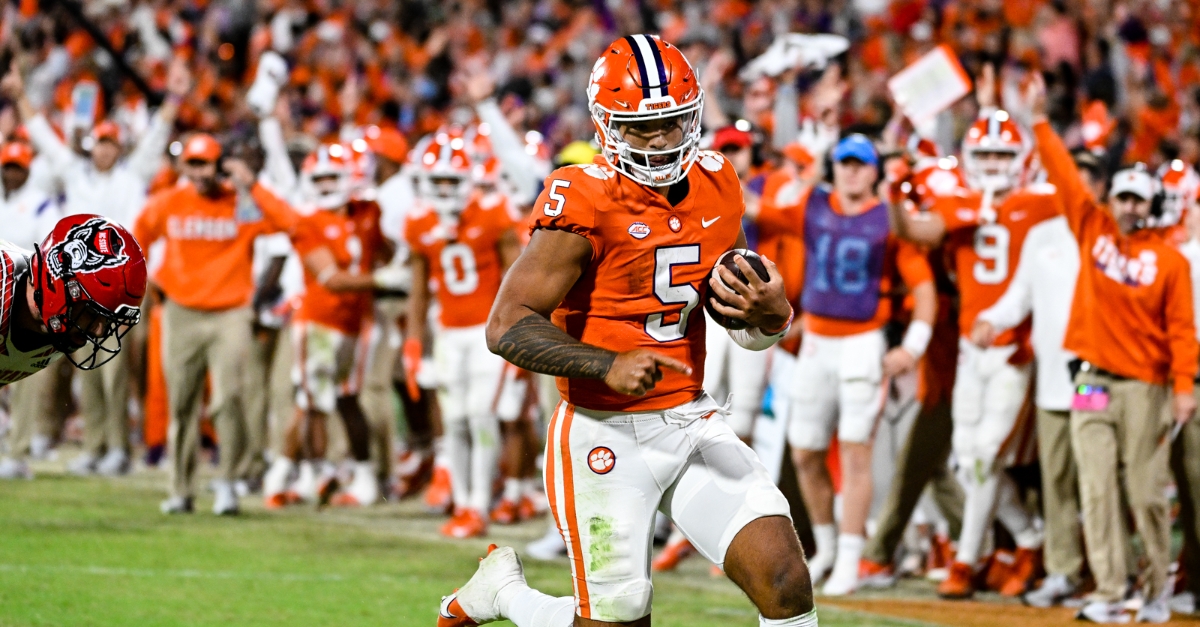 Uiagalelei scores the final touchdown for the Tigers.

CLEMSON – The touchdown that sealed Clemson’s win over NC State was drawn up on the sidelines by head coach Dabo Swinney.

No. 5 Clemson shut down No. 10 NC State’s offense and Tiger quarterback DJ Uiagalelei put together another solid effort in a 30-20 victory over the Wolfpack in Death Valley Saturday night in front of a sold-out stadium and electric crowd.

Uiagalelei 21-for-30 for 209 yards and a touchdown, but more importantly, carried it 14 times for 73 yards and two scores. His last carry was a nine-yard touchdown run that put the Tigers ahead 30-13 with just over three minutes to play.

The Tigers were running the clock, using plenty of time between snaps and making NC State use its timeouts. The drive started with 7:39 left on the game clock and Clemson ahead 23-13. The Tigers chewed up 4 1/2 minutes in nine plays, and facing a 3rd-and-goal at the nine, Uiagalelei faked the handoff to running back Phil Mafah, turned around and ran a bootleg untouched into the endzone for the 30-13 lead with 3:04 to play.

Tight end Jake Briningstool told the media after the game that the play was drawn up during the timeout.

“We've never practiced that play before, so we just pulled it out and scored on it,” Briningstool said with a smile. “That’s Coach Swinney's juice, I guess, and then we were all fired up. Iy kind of put the dagger in them and put the game away. We drew it up in the huddle, and then we just executed it and scored the touchdown. It's a play we have. And then he just kind of made a tweak and it happened to be a touchdown.”

Briningstool said he wasn’t surprised at how easy Uiagalelei scored.

“I knew how the defense has been playing. They've played pretty aggressive the whole night,” he said. “And on film, you can see how fast they trigger, and then everybody just kind of bit on the fake, and then you walk into the end zone. It's awesome.”

Offensive coordinator Brandon Streeter gave all the credit to Swinney for the call.

“So we got them to use all their timeouts, so we definitely don't want to throw the ball there,” Streeter said. “And Coach Swinney had an awesome idea, hey, let's get under center. They were flying to the ball, obviously, and even in that situation we have to understand that we have to make it look like more of a run. And DJ did an awesome job of selling it. So did the guys up front, and it worked out beautifully. It was something we had not practiced. That was something that Coach Swinney had a great idea and man, it worked.”

Streeter said the offense is a group effort.

“I'll tell you what, our offensive staff has been incredible to work with. They do an incredible job during the games of giving me ideas and thoughts,” Streeter said. “We have a really good thing going right now where we're kind of giving each other ideas and thoughts, and obviously Coach Swinney, too. He has a different perspective sometimes, too. He's coming from the head coaching position and he gives us that perspective and he can see things and feel things and goes with his gut a lot of the time.”