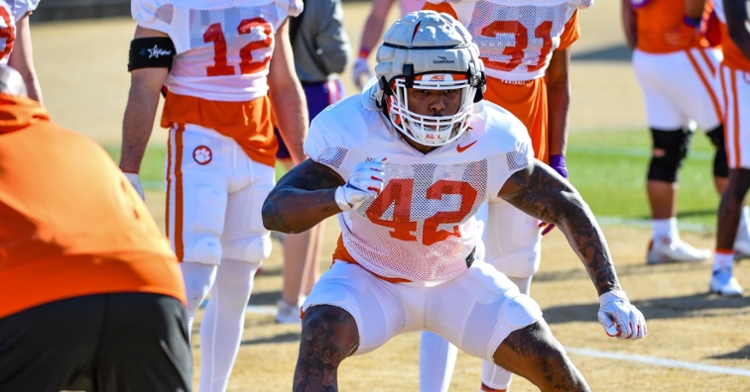 Bentley has stood out this spring.

Look for the Clemson defense to be even better in 2021.

The Tigers weren’t bad in 2020, finishing 15th in total defense. But Brent Venables’ group battled injuries (Tyler Davis and James Skalski missed chunks of time and Lannden Zanders played hurt), and an influx of talented youngsters had to learn on the job as starters (Myles Murphy, Trenton Simpson, Bryan Bresee).

The overall picture is clouded by the disastrous performance against Ohio State in the Sugar Bowl – the Buckeyes averaged almost nine yards per play in racking up 639 total yards (385 through the air and 254 on the ground). All of the defenders we have spoken with have said that there is a renewed sense of urgency on that side of the ball, and while we haven’t spoken with Venables since before the Sugar Bowl, head coach Dabo Swinney has informed about some of the players that stood out during the first nine practices of the spring.

That includes veteran defensive end Xavier Thomas, who will battle for a starting spot opposite Murphy this fall.

"The biggest thing has been (Xavier Thomas') availability,” Swinney said. “He's been here every day and he's been very consistent. And that's all we need. I'm excited for him to hopefully finish up strong and really have the type of offseason he needs to have and wants to have, and if he does that, then that's going to be good news for Clemson."

As the Tigers look for depth at the defensive end spot, linebacker Kevin Swint has seen time there.

"Kevin Swint is one of the best pure football players we have on this team,” Swinney said. “He can play MIKE, WILL, and it's no problem at all for him to play end. We are just cross-training him at different spots. He gives us a lot of flexibility, kind of like Trenton Simpson, who gives us a lot of positional flexibility."

Reserve linebacker LaVonta Bentley has been outstanding, as have the other backups.

"He's been awesome. He's had by far his best nine practices since he's been at Clemson,” Swinney said. “He's grading really well. He's productive and making plays. Keith Maguire had an interception today (during a recent spring practice session). Kane Patterson is really developing. Trenton Simpson is a problem for anybody we play. You better know where he's at."

Swinney has also raved about the secondary.

"Nate Wiggins is a young, mid-year guy that's coming here and had an interception today," Swinney said the last scrimmage. "I mean, he's got to get in the weight room, but he is really talented and has a chance to really be a very strong contributor for us this year as a true freshman. Andrew Booth is having his best spring of practices he's had of any spring. Fred Davis has made some great strides; I love what I've seen from him. Mario Goodrich is a savvy veteran guy that really is probably more self-aware than he's been any any point in his career and I like that. Goodrich can play the nickel spot and either corner spot, so he gives us some versatility.

“Sheridan Jones is developing. He had some moments early last year but didn't finish the season well. He's a talented prospect that's going to get better and better. We had a kid Coty Sensabaugh around here, and that's kind of who Jones reminds me of. Still developing physically and developing his confidence, but he certainly has the tools to be a really good player. Didn't finish the season well and we need him to compete so he can have a great junior year-- or sophomore year, however you want to look at it. It's a good group that's competing their tails off."

Nickel Malcolm Greene was having an outstanding camp before surgery ended his spring.

"He was available for pretty much this whole first half, but we want to go get that (shoulder surgery) done,” Swinney said. “It's three more weeks we can gain on the back end if we do it now instead of waiting until after spring. He'll be fine. He's got good work in. Not something we are worried about or anything like that. Second half (of spring), we will work Mario Goodrich at nickel."