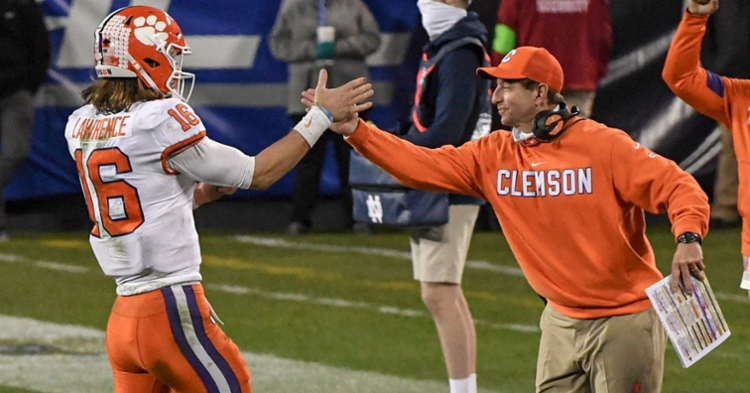 Swinney said he was happy to be a part of Lawrence's journey.

Clemson head coach Dabo Swinney wanted to be on hand when Trevor Lawrence made history, something he called a special moment.

Lawrence was the No. 1 overall selection by the Jacksonville Jaguars in the 2021 NFL Draft. NFL Commissioner Roger Goodell made the announcement in Cleveland, Ohio – the site of the draft – Thursday night.

Lawrence celebrated with friends and family in Seneca, and Swinney was right in the middle of the festivities.

“Just a special moment. First of all, just so thankful for having the blessing of coaching Trevor for a few years,” Swinney said. “We just kind of helped do our part when we had him here, but let me tell ya, his family and all the family that poured into him he was growing up, like coach (Joey) King there at Cartersville High, he showed up here a great young man. And I am just thankful that we had the opportunity to spend the last three years together.”

Swinney said Lawrence was deserving of the top pick, something he said was a cool moment for the Tiger program.

“We knew this was a possibility but this comes down to putting the work in day in and day out and it's just been a joy to watch him do just that,” Swinney said. “This guy is incredibly disciplined and committed and it's a super-cool moment to be a part of this. And it's a cool moment for Clemson as well. There have been a lot of things that have happened to Clemson over the years but this is one of them that has never happened. He is leaving here as the winningest quarterback, led us to a 15-0 season, and now the first No. 1 pick in the history of our school. It's a great moment for everyone.”

Lawrence went 34-2 in three seasons as a starter at Clemson – 11-0 as a freshman in 2018, 14-1 as a sophomore in 2019 and 11-1 as a junior this past season. He led the Tigers to appearances in the National Championship Game following his freshman and sophomore seasons.

Clemson won the national title following his freshman season when Lawrence was named Offensive Most Valuable Player for his performance in a 44-16 victory over Alabama.

Lawrence completed 758 of 1,138 passes for 10,098 yards and 90 touchdowns with 17 interceptions in three collegiate seasons, throwing for 3,153 yards and 24 touchdowns as a junior this past season.

He also rushed for 943 yards and 18 touchdowns for Clemson.

"They’re getting a great human being, great leader, and a highly-skilled football player,” Swinney said. “He is a mentally and physically tough football player. He’s fast, he’s big, he’s strong, and he is an incredibly equipped and skilled quarterback. He just really has great command of the position, an understanding of football, aptitude for football, understanding of the defense.

“Really, there is not anything you could ever want in a quarterback that he doesn’t possess. But the No. 1 thing that they’re getting is a great man of faith, great character, and the ultimate winner. If you go all the way back to middle school, he has not lost many games. And I think he is going to be a guy that impacts the community, will impact the coaching staff, will impact free agency, and really do it in an incredibly humble way.

"Great spirit, a guy that has got his feet on the ground and really ‘gets it’ in every aspect of what his responsibility and what his role will be, not only in the organization but within the community and the NFL.”