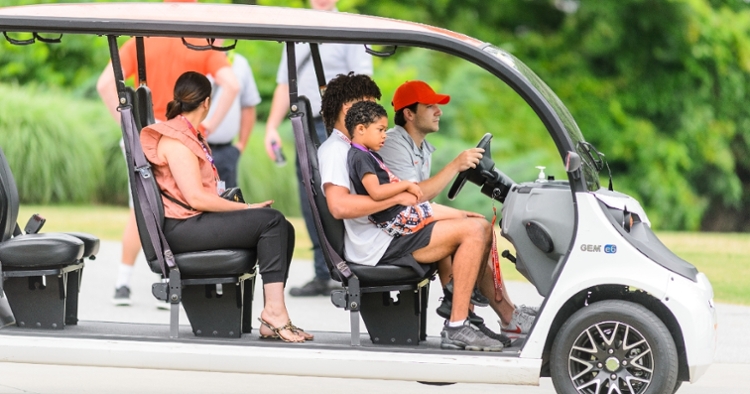 Antonio Williams and family get the tour with a Clemson staffer.

One last session on Sunday afternoon leads to three days of rest.

The eighth session (out of 12) of head coach Dabo Swinney’s high school camps concluded Sunday afternoon, and while Sunday was quieter than Saturday, there were still plenty of prospects to go around. There will be visitors on Monday, Tuesday, and Wednesday, but camp resumes Thursday and Friday with two sessions each day. The Elite Retreat is next weekend.

I started off with the offensive linemen and it didn’t take long to notice 2023 prospect Joshua Miller of Colonial Heights (VA) Life Christian Academy. Miller has offers from Florida St., Kentucky, Maryland, Michigan St., and Nebraska (among others). He was easily noticeable because of his size (6-5, 315) and footwork. He drew special attention from offensive line coach Robbie Caldwell and offensive line assistant Thomas Austin.

Another offensive lineman from today that stood out – literally – was Sandersville (GA) Washington County 3-star Falentha Carswell. Standing in at 6-7, 275-pounds, he has offers from Miami, Oregon, Georgia, Tech, and others.

*Class of 2022 4-star wide receiver Antonio Williams out of Irmo (SC) Dutch Fork was on campus all day with his family. He was on a golf cart tour this morning, then watched the receivers work out in the afternoon session. During a break in the session, wide receivers coach Tyler Grisham took Williams and his family out on the field to speak with Swinney. I was told that Swinney was spending a lot of time recruiting Williams’ four-year-old brother, who was carrying a tiny football everywhere he went.

*Four-star Wake Forest (NC) Rolesville 2023 wide receiver Noah Rogers was a constant presence in Tyler Grisham’s group. The A-group had several bigger receivers on hand, and Rogers was one of the standouts. Notre Dame, Oregon, Louisville, North Carolina, Penn St., and others have offered.

Another one of the under the radar guys working out at wide receiver was Kylic Horton, who plays 8-man football at Summerton (SC) Clarendon Hall Academy. I received a text message a few days ago from someone at the South Carolina camp, and they said Horton runs a legit 4.4 40-yard dash and impressed the South Carolina coaches enough to receive an offer. His only other two offers are Benedict and Gardner-Webb, but that will change.

*A steady parade of former Clemson players has made their way through the doors this weekend – there is a benefit golf tournament for Brian Mance on Monday – and Tajh Boyd, Grayson Marshall, and others have taken in the camp. Boyd said he loved watching 5-star quarterback Arch Manning, but was also a big fan of 4-star Nico Iamaleava out of California and believes the 6-5 Iamaleava can win a Heisman in the right system.