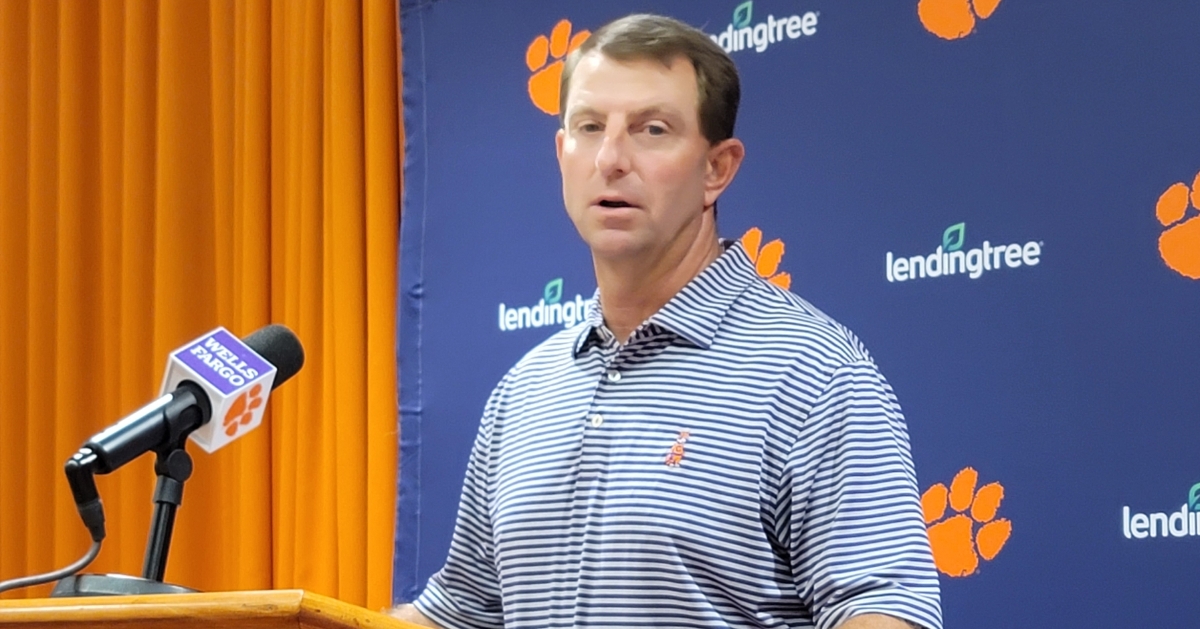 CLEMSON – There have been a few times during Dabo Swinney's tenure when he hasn’t had any players of the game. Not many, but a few. Swinney was so unhappy with his defense after Saturday’s effort against Furman that there were no defensive players of the game.

The Tigers host Louisiana Tech Saturday at 8 pm in Death Valley fresh off the heels of a 35-12 victory over Furman last weekend. However, the Paladins were 10-for-18 on third down and amassed nearly 400 yards of total offense in a losing effort.

More than once during the 45-minute press conference ahead of the game against the Bulldogs, Swinney called out his defense and even individual players for loafing during the win over the Paladins. Swinney said he has had no problem getting the attention of his players following last week’s round of upsets.

"Absolutely. They're young people. They're told how great they are,” Swinney said. “That's one of the things I hate about the recruiting process, the rankings and all that mess. You have to show up and compete. Yeah, it helps, to answer your question. As fans, you get reminded that you cannot take anybody for granted. Marshall was plus-3 in the turnover margin. App State was plus-3. Next thing you know ... a tight game and you lose. Talent only gets you so far. Talent is just part of the equation. If this game was played on paper, we wouldn’t be where we are right now.”

Swinney said he was disappointed in “the juice” his defense displayed against the Paladins and as a result didn’t want to name a defensive player of the game.

“Just disappointed in our effort. We weren't relentless. The name of the game is points,” Swinney said. “We give up 11 points a game, we'll win the whole dang thing. We're doing a good job in a lot of areas, but I didn't like the juice they played with. You have to give Furman some credit, too. They played harder and tougher than we did. They executed better than we did. We have to get off the field on third down. Guys weren't ready to play. Period. We have to show up. That's the No. 1 thing and that's on me to make sure that happens. I'm just disappointed in our effort. We didn't have a player of the game. I'm disappointed in how we competed. Do your job with relentless effort.”

He was asked about the play of some of the younger players in the secondary, and he said they had better be ready to play against the Air Raid offense of Louisiana Tech.

"I thought we did a good job in week one but I thought we were terrible Saturday. We did a poor job playing leverage, the point of attack on man coverage stuff, poor job on slants and screens,” Swinney said. “We have to be more disciplined doing our job. One game good, one game bad. We're not giving up big plays, so that's a positive. We've been great in the red zone and on fourth down. Two of 16 on third down Monday was outstanding but 10-of-18 on third down Saturday was poor. "Everyone we had got beat inside ... just lost leverage.

“A lot we can improve on. I don't know anyone out there that's perfect. Those NFL guys aren't perfect. We didn't show up defensively Saturday. They all stayed at the Hilton Garden Inn ... immaturity, lack of focus. They better be ready this week. These boys (from La. Tech) can spin it. That ball will be in the air."

Swinney said the players that loaf on Saturday find out his thoughts when they watch film on Monday, and he has the final say on if a player is loafing or not.

“It's always better to correct when you're coming off a win. Mondays are Mental Monday. Everyone takes ownership of that," Swinney said, "and we keep going. We have a lot of experience on the defensive side. And let me say, we played a lot of people on defense. And we did it purposely. We got guys in there early. We're trying to grow our team and develop our team. They responded well. They know. Myles Murphy knows when he's loafing. If he doesn't, he finds out when he comes to the meeting on Monday. If you have any frickin' pride, you respond. If you don't, you end up on the sideline. That's just the way it is. We ain't going to change the standard. It's not just Myles. It's the whole group. As long as you're honest and transparent, you won't have any problems."