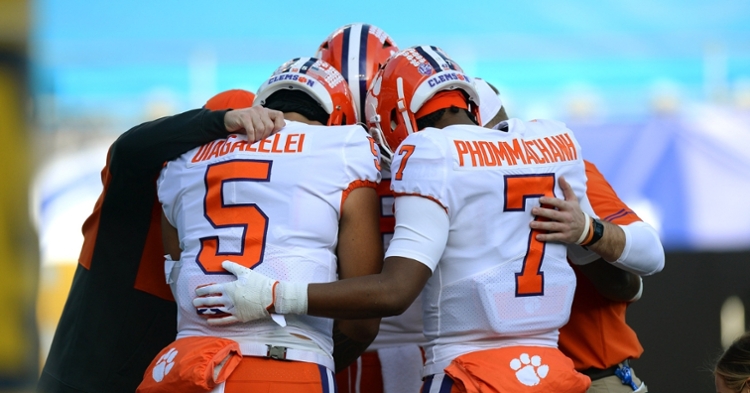 Uiagalelei (5) and Phommachanh (7) in a huddle last season.

CLEMSON – The transfer portal was never an option for a Clemson coaching staff dealing with questions surrounding the depth at quarterback heading into the summer and fall.

The Tigers lost backup quarterback Taisun Phommachanh to a torn Achilles in the spring game, and many wondered if either of the 2021 signees – Will Taylor and Bubba Chandler – would stay on campus or head to professional baseball. Chandler eventually opted to sign with the Pittsburgh Pirates, but the current backup is walk-on Hunter Helms with Taylor and walk-on Billy Wiles adding depth.

“We did not. Nope, we did not. As you know, Coach Swinney and our program's philosophy on that - we really feel like letting these guys earn it that are here and rewarding them for their hard work,” Streeter said. “So we are trying to avoid that (the portal) as much as possible. We never contacted anybody. We might have had a few conversations about it but it was never something that was serious at all.”

Streeter said he isn’t concerned about the depth behind starter DJ Uiagalelei.

"I'm really not concerned, I'm really excited," Streeter said. "I think we're gonna have five guys that I feel I feel really good about. I mean obviously, there's a lot to do. It is a little thinner than most years. But as you all recall, the year that we won the national championship in 2018, after that fourth game, after losing Kelly (Bryant), you know, it was Trevor (Lawrence) and Chase (Brice), and Ben Batson. And then it was Hunter Renfrow.

"We're gonna be deeper this year. Now it's a matter of getting ready to play, obviously. Obviously losing Bubba, we lost that number obviously, a little bit more depth. Coming in, in June, is very, very hard to learn on offense and be very, very comfortable with it, but I've been very impressed with Will Taylor and also with Billy Wiles. I think both those kids are going to be capable and are going to be able to help us."

Head coach Dabo Swinney said he thinks Phommachanh will be available at some point this fall.

“Taisun, the good news on him is we’re gonna get him back. Initially, it’s a tough injury, you don’t really know. But he has been phenomenal with his recovery, so we’re gonna get him back sooner than later and certainly back before the season is over,” Swinney said. “He’s gonna have an opportunity to be back with us, and that’s big for us. Obviously, we had Bubba (Chandler) and Will (Taylor). Certainly, we were hopeful that we’d get both of them, but we felt like if one of them made it, we were gonna be in a much better spot. ... I like where we are today better than where we were in the spring game, the last time I think we met. We're in a much better place and very optimistic, and a lot of that again is where Taisun is right now and where we think he's gonna be.”

Swinney made it known he’s not a fan of the current iteration of the transfer portal.

“It’s about what I thought it would be,” Swinney said. “There are so many kids in the portal and not enough spots for them. The intention is good, and I agree with allowing everybody to be able to transfer. I just personally would’ve tied it to education again. I would’ve tied it to, ‘OK, you can transfer anywhere you want anytime you want, but you sit a year. But guess what? When you get to your senior year or your graduation, you get that year back.’ So you don’t lose anything.”