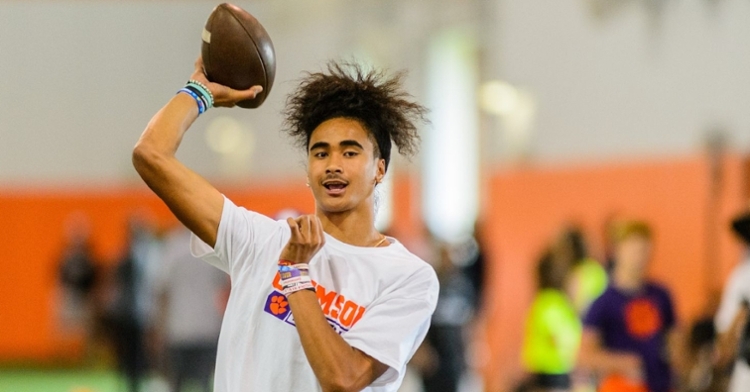 Iamaleava has a nice throwing motion.

Sun’s out, guns out.

Saturday morning broke bright and clear and a little hot at Dabo Swinney’s high school camp morning session, and while 2023 5-star quarterback Arch Manning never materialized, there was plenty of gunslinging going on with the visit of Downey (CA) quarterback Nico Iamaleava.

Iamaleava is 247Sports' No. 4 quarterback and No. 22 overall prospect in 2023. I spoke with his father at length about the tour they’ve been on and he said they are simply embracing getting out and enjoying meeting all of the coaches and seeing the different campuses. Iamaleava is the second cousin to Clemson quarterback DJ Uiagalelei.

He camped at Ohio State this week and earned an offer, and his dad said they will camp at Alabama on Monday. They also plan to drop by Georgia. It’s interesting to note that 4-star quarterback Malachi Singleton, out of Kennesaw (GA) North Cobb, was also working out, and Singleton’s dad told Nic Iamaleava (Nico’s father) that he saw them at Ohio State last week. The two checked their schedules and should see a lot of each other over the next week.

Singleton has offers from Georgia, Miami (FL), Georgia Tech, Louisville, and NC State among others. He was impressive and will earn more offers after making the camp circuit.

Eli Holstein is a 4-star out of Zachary (LA) who also threw (LSU, Texas A&M, Auburn have offered).

As for Iamaleava, I was told that he’s also the nation’s No. 1-ranked volleyball player (he has a football AND volleyball offer from UCLA). His mother has been battling breast cancer and he plays to honor her. Their oldest son, Matt, was a high school All-American at Long Beach Poly and is now a freshman in the Long Beach State men’s volleyball program; daughter Nicaylah is a senior at Long Beach Poly this year; and Nico is making inroads in both football and volleyball, but of course his future is on the gridiron.

He has a nice throwing motion and the arm strength to make any throw on the field. I’ve seen clips of him making a Patrick Mahomes-type of throw, and his dad said that while he hates getting away from fundamentals, it’s something they work on. It’s also interesting to note that Iamaleava works with former Texas Rangers pitching coach Tom House (who is also a throwing coach for Tom Brady).

*Tennessee offensive line commit Brian Grant worked out with offensive line coach Robbie Caldwell. I’ve been told he is an under-the-radar guy. He’s listed at 6-8 (didn’t quite look that tall to me) and 270 pounds. He is out of Choctawhatchee High School in Fort Walton Beach, Fla. He bends well and you can tell he loves to hit – he was solid in the drills I watched. (Side note: Thomas Austin is already a heck of a coach, but listening to him out there, it’s obvious he’s close to being ready to be THE GUY for somebody).

*Over with the defensive linemen, of course 5-star Matayo Uiagalelei stood out. The younger brother of DJ, he was brought to camp by his mother, Tausha, who watched each drill like a coach. He has an explosive first step and nice lean. He was being coached hard by Lemanski Hall. I would love to see him work out at tight end. There really isn’t a lot to write about Matayo that you don’t already know – he’s explosive and big and has every tool to be dominant. 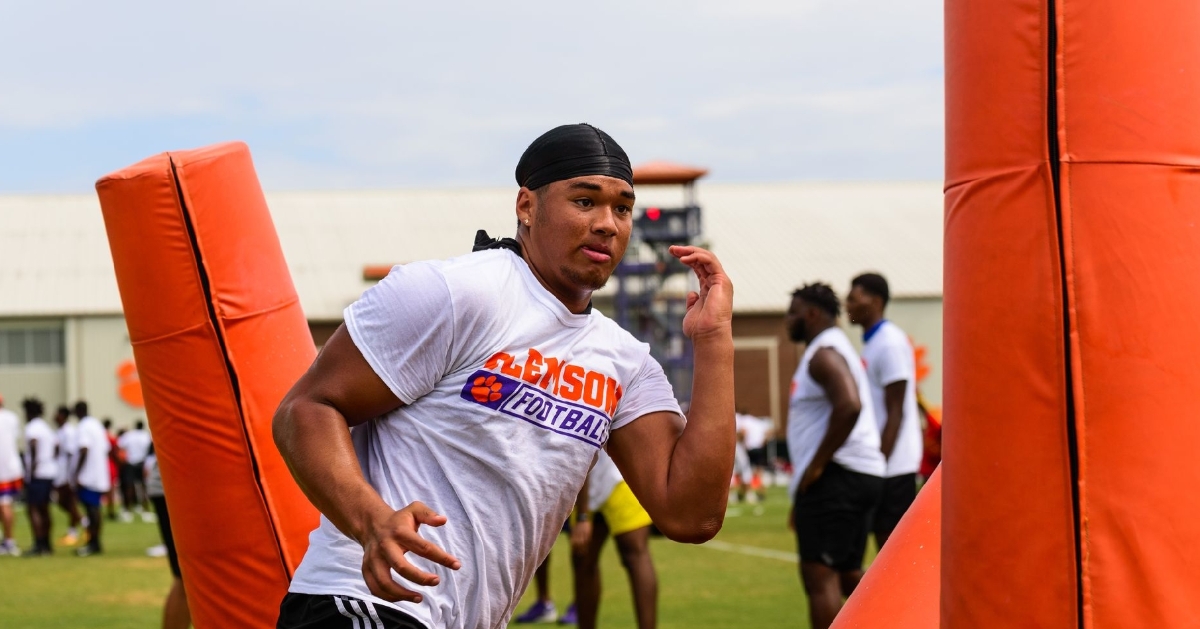 Matayo Uiagalelei blows through a drill

*Another big-time defensive lineman on hand was Kelby Collins, a 4-star out of Gardendale (AL) who has offers from all the major players. He was noticeable in a pretty good group – long limbed and incredible bend for a player his size (6-5, 250). His father is on hand with him (and more on that later).

*As I’m looking over my notes, I have to note that I saw a first for me – two young ladies were running routes with the wide receivers. And doggone it, they were doing just fine.

*In a bright orange shirt at wide receiver was 4-star Shamar Porter of Nashville (TN) Enworth. A long conversation with his dad (a little about living in Nashville and more about Dabo Swinney) showed the respect Swinney has earned across the country as not only a good coach but a family man. Porter’s parents were on hand to watch their son, who was smooth (reminded a little of Beaux Collins when he first arrived. (Quick note here: Collins had been working with the wide receivers this week but was in a walking boot this morning). Another nice looking receiver was Cayden Lee of Powder Springs (GA) Hillgrove (the same high school as Myles Murphy).

*There was a great group of tight ends working out with Tony Elliott, including Jaleel Skinner out of Greer. Skinner is noticeable right off the bat for his height (6-5, 210) and incredible wing span. You can tell he’s played a lot of wide receiver and runs nice routes. Would love to see him during the 1-on-1’s.

Also working out with Elliott were Ty Lockwood, a 4-star out of Thompson’s Station (TN) Independence. He has offers from Michigan and Ohio State,among others. Also working out was Jackson Long, a 3-star out of Hendersonville (TN) Beech who has an offer from Coastal Carolina.

I have plenty more, but now it’s time to head to the afternoon session, and possibly Arch Manning.