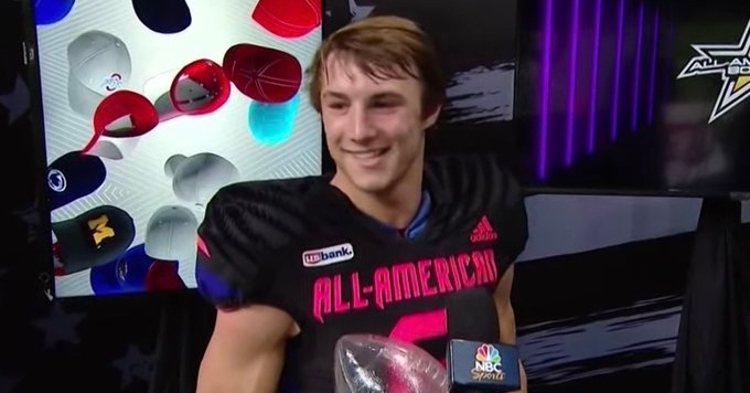 Cade Klubnik shows off his trophy Saturday in San Antonio.

Cade Klubnik wrapped up a spectacular high school career with a strong showing at Saturday’s All-American Bowl in San Antonio and will begin his Clemson career when he shows up Sunday to move into his dorm room.

That’s quite a weekend.

Klubnik showed not only his passing ability, but also his ability to read defenses, use his legs to both make plays and evade pressure, and throw on the run. Klubnik did it all and was easily, at least in my eyes, the best player on the field. His first two series ended in gorgeous touchdown passes as he helped lead the West squad to a 34-14 win.

In all, Klubnik completed 12 of his 18 passing attempts for 205 yards and three touchdowns.

Klubnik is ranked as the top quarterback in the nation by Sports Illustrated, PrepStar, and Rivals.com and as the second-best quarterback by 247Sports and third by ESPN.com. He is the Gatorade Player of the Year in Texas and was named as one of three finalists for National Gatorade Player of the Year for 2021. He amassed a 27-0 record as a starter at Austin (TX) Westlake and won two state championships as the starter in Texas’ highest classification.

Late in the game, after another spectacular Klubnik play, a former Clemson receiver texted me and said, “Klubnik is a faster Deshaun Watson.”

That was an interesting comparison – head coach Dabo Swinney thinks the same way.

"He's special, I mean, he's magic," Swinney said last month. "Just kind of what I see. I mean he reminds me so much of Deshaun (Watson). Just his traits, his attributes as a quarterback. Even his frame and his build coming out of high school, very similar. Cade's faster probably than Deshaun but very, very similar skill sets."

And he’s done it all against the highest level of competition in the state of Texas.

"Just a great presence," Swinney said. "This guy's out there playing for 30-plus thousand people in Texas Stadium there and probably gonna play in front of 40-50,000 this weekend. He just has an unbelievable voice and presence and command. He's so blessed. I mean, to be able to be in an environment like that, I mean, it looks like college teams out there. The way the programs are run, Texas high school football's -- it's pretty unique.”

Klubnik will move into Clemson this weekend and start classes Wednesday. As a senior in 2021, despite missing three games with an injury, Klubnik completed 71.3 percent of his passes for 3,251 yards and 43 touchdowns against just three interceptions as the Chaps finished the year 16-0. He also rushed 70 times for 465 yards and 12 scores.

*Former Clemson player Ricky Sapp announced on social media this weekend that he was headed back to Clemson to work with Joey Batson on the strength and conditioning staff. Sapp is a familiar and loved face around the program – he committed to Clemson in June 2005 as a 5-star prospect from Bamberg (SC) Bamberg-Ehrhardt High School. Sapp played for the Tigers from 2006-09 and entered his senior year fourth among active ACC players in career tackles and fourth among active players in career sacks.

Sapp was selected in the fifth round of the 2010 NFL Draft (134th overall) by the Philadelphia Eagles. He also spent time in the NFL with the New York Jets, Houston Texans and Washington Redskins.

As I’ve mentioned several times, these are interesting times around campus as Swinney’s entire operation has undergone a shakeup. But they are also exciting times as the coaching staff trends younger and brings back former players into the fold. This spring is going to be an interesting time.

He found time to live out another football dream in Texas, though, leading the West to victory @AABonNBC. #txhsfb pic.twitter.com/8poXmnRi1A