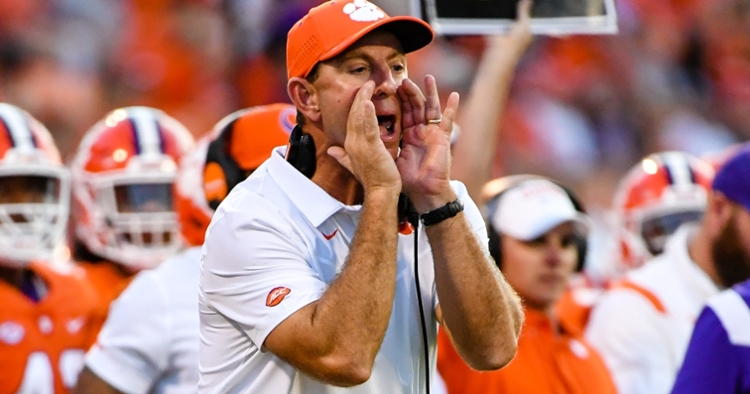 Swinney yells during the win over SC State.

CLEMSON – Head coach Dabo Swinney told the media Sunday evening that backup quarterback Will Taylor, who continues to show his explosiveness when he gets a chance to play, will stay at that position for now and not move to wide receiver.

Swinney has said that Taylor will play quarterback this season and then move to wide receiver next spring, and even though fans might be clamoring for Taylor to get time in the slot, there are no plans to make that move. At least not now.

"He's still full quarterback and we use him in our wildcat package some. We'll continue to bring him along. He doesn't know all the nuances of the position (wide receiver),” Swinney said. “He knows what to do but how to do them will take some time. He's never played the position. At some point we'll get into that transition. He has been a great quarterback, a state champion quarterback, a three-time state wrestling champion and a high draft pick in baseball. He's just an elite athlete. I had him in camp and had a chance to work him at receiver there. He was very natural. He's an explosive player. He's got a lot of strength to him for his size. He has a lot of confidence and is a great leader. He understands the game from a big picture standpoint. When it's all said and done he's going to have a heck of a career here."

"Got through the film and grades. I'm really proud of our team, how they prepared and how they competed. We had tremendous preparation. The objective was to get better and we definitely improved as a team. Playing a lot of guys is good for morale early in the season,” Swinney said. “Offensively, I loved our first group. I'm disappointed that our second group did not score more. We were balanced. I thought DJ (Uiagalelei) did a nice job in his decision-making in the rushing game. We had 130 yards after the catch and a lot of yards after contact. I was really impressed with Kobe (Pace) and (Will) Shipley and the yards they got after contact. No sacks. Still, some things where we need to get better. We put the ball on the ground too many times. We had two interceptions.

"Defensively, we played 41 guys. The effort was tremendous. We had no penalties, so we had good discipline. No touchdowns allowed. They punted 11 times. We had just one sack but that was a product of them getting the ball out quickly. They were just 2 of 16 on third down. I was most encouraged defensively over the fact that we subbed a lot and our backups did not let them score. Special teams, two weeks in a row we have made good strides there. We're punting well and another huge play on punt return. Will Taylor has a chance to be a dangerous guy there.”

Swinney said that none of the top three backs are making separation from the others and all three will continue to receive carries.

"The top three guys deserve carries right now, for sure. I don't really see that changing,” he said. “All three will continue to warrant opportunity. We're going to need them, for sure. You just wish (Michel) Dukes would take another step and be more consistent and detailed in what he does. And we all trust Rencher. You know what you're going to get with him. They played well. Hard to see separation there."

He then said he was pleased with the play of the offensive line.

"The first group was much better. (Will) Putnam played much better. (Matt) Bockhorst played well. (Marcus) Tate is going to get better and better. Two weeks in a row (Jordan) McFadden was just solid as a rock. The first group, I was pleased with. (Paul) Tchio did OK, but got on the ground a couple of times. Trent (Howard) and Mitchell Mayes played well. I am super excited about Dietrick (Pennington). He got banged up, so he only got a few plays. He's a very big, strong, active kid who is learning. They did a solid job. Hunter Rayburn got some time in a couple of spots and held up well. Overall, that whole second group is not quite as consistent as we need them to be to finish up drives."

Swinney also said he needs to see better play out of his receivers.

“We got better. Justyn Ross played outstanding. It was great to see him bounce back and respond. It's how you impact the game,” Swinney said. “It's how you impact the game without the ball, too. It's doing your job. Ross was excellent. He could have easily had three touchdowns. Joe Ngata did some good things but also gave away some easy minuses, things he needs to clean up. Ladson did a nice job. Same thing with EJ Williams. Getting Beaux Collins and Dacari Collins out there and getting opportunities was good to see.

"We just have to be better on the perimeter. We need to be more detailed in how we are supposed to attack things from a blocking standpoint. This group's best football is in front of them. That's why the NFL has preseason games. I say that every year. Offensive football is all about timing. You can't simulate the game speed in practice, especially with the energy you see on game day."