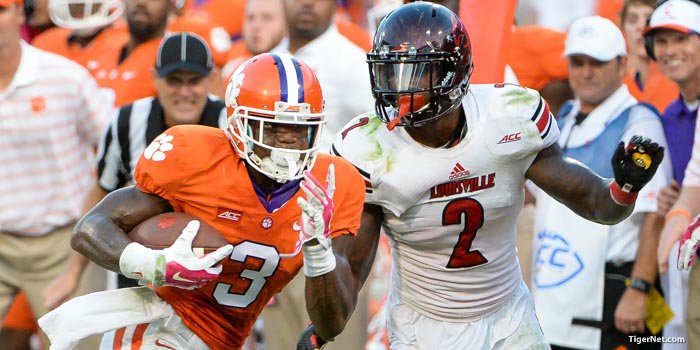 Ninth-ranked Clemson (2-0) defeated Appalachian St. 41-10 Saturday in Death Valley but travels to Louisville for a Thursday primetime matchup against 0-2 Louisville, 34-31 losers at home to Houston Saturday.

Dabo Swinney
Head Coach
View Full Profile spoke with the media Sunday as part of his weekly teleconference, and he said that while he was happy with Saturday’s win the Tigers have plenty to improve on before Thursday.

“I'm proud of our team for handling its business yesterday. It's another solid win for us, but we certainly have a lot to improve on, and we're in the process of working on that today,” Swinney said. “It's a difficult challenge on a quick turnaround because we're getting ready to play a difficult opponent like Louisville and travel on Wednesday. Lot of challenges this week but I like our mindset today. We had a lot of positives yesterday. We played a lot of guys and had enough mistakes to challenge them with today.

“We sputtered in the first quarter yesterday, whether it was a snap or a penalty, a missed block or poor technique. But there were positives, too. Our protection outside of one play was solid from a drop-back standpoint. We had 52 plays in the first half, so that's the type of tempo we want. Defensively we had good focus and intensity. They were the spark for us. Very few mental errors. The four turnovers, pick-six, 10 three and outs, 11 tackles for loss. They had 95 yards passing. So I was pleased with how our first group played. We know our backups have to improve. We have a very difficult challenge in Louisville. They're 0-2 but could be 2-0. At the end of the day, it doesn't matter because we're both undefeated in the conference. We will have to play very well in our first road trip. We've got practice in a few minutes."

“Andy Teasdall was outstanding. Two weeks in a row we've had a big play on kickoff return,” he said. “The players of the game were Teasdall, Shaq Lawson

Charone Peake
Gr. Wide Receiver
#19 6-2, 214
Moore, SC
View Full Profile . I was pleased to see us turn the turnover margin around. That trend has to continue for us. Big plays and turnover margin are things we look at all the time. Dane Rogers

"We will practice in vests today, which is not full shoulder pads. We will move around and have a Monday-type practice today,” Swinney said. “Tomorrow we will have full pads, sort of a hybrid Tuesday-Wednesday practice. Tuesday will be like a Thursday where we try to pull it all together. We will travel on Wednesday. It's totally different, but that's why we try to get in some work in camp."

“We'll do the best we can. We played them last year, and we looked at all of their tape. We're familiar with a couple of them. You just watch the tape from Auburn and Houston. They won't change their plan drastically. They may do more spread personnel when No. 8 (freshman Lamar Jackson) is in the game. He's incredibly athletic. Primarily they will be a heavy two tight-end team. That's what they want to do."

His thoughts on Clemson’s pass defense

“We've just had one game where you could really get a look at them. Wofford isn't really built to throw the ball a whole lot. This one particular game, Appalachian St. wants to throw the ball and they're good at it. To hold them to 95 yards passing is a great start, but we're going to have much bigger challenges starting this week. After one real true measure from a pass defense standpoint, we're in a good spot. We just have to keep building, and we have to keep building that depth. Our first group is dialed in. We can be a really difficult group that can challenge people on the back end."

"We did okay. We had 52 plays in the first half. We had some explosive plays. I think the quarterback can help the offensive line a little bit more. We had some missed assignments at quarterback yesterday where we were sledding up hill. I wouldn't say we were dominant up front yesterday but a solid day. They had some zone-twist type things that were a little bit different. App. St. has a solid group over there. I also wasn't pleased with how our running backs ran early. I was excited to see how Wayne Gallman

Wayne Gallman
RS So. Running Back
#9 6-1, 210
Loganville, GA
View Full Profile came on in that second quarter because he ran with authority. It's not just the offensive line. Certainly room for improvement for all of us."

"They are just more talented. It's just that simple. We went to the wire with them last year. They've played two last-play games already. They could have won either one of them. Those are tough, tough games. I don't think you can get a measure there. This past week against Houston, they have better personnel than Houston in my opinion, but Houston is a good team. When you turn it over four times against Houston, you're going to get beat. They also gave up a 100-yard kick return and the next thing you know you lose. They're a very talented group that's very capable of winning this division. We have to play our best game. This will be the first experience for a lot of our guys on the road."

His thoughts on his team after two games

"I don't really know what the identity of our team is right now, but they have shown up and have taken care of business. They've come ready to play. Just look around college football. It's just hard to win. I'm watching Baylor and Lamar, and it was almost tied at the half. I don't even know where Lamar is. Look at Bowling Green, Jacksonville State and Toledo. Everybody has good players. It's hard to win. I just have a great appreciation for these guys, for getting themselves ready and buying in. We played a much better team this week than we did last week, and we got the same result. And we've played a bunch of guys. If they will continue to buy in to how we prepare, we can be a good football team."