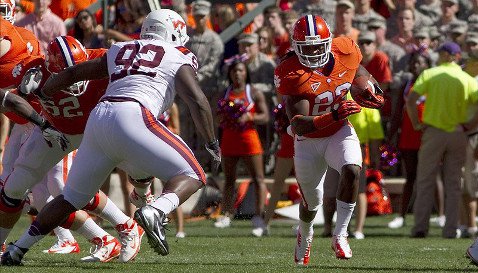 CLEMSON – The Clemson Tigers finished the road portion of the 2012 schedule with a 56-20 victory over Duke Saturday night in Durham, N.C., and the victory was all the Tigers could ask for – a dominating win over a conference opponent, a fairly healthy roster and the ability to play a lot of younger players in the second half of the win.

Dabo Swinney
Head Coach
View Full Profile spoke with the media during his Sunday teleconference, and he said the Tigers continue to improve, especially defensively.

“It was a really good win for our team and a great way to finish up our road season,” Swinney said.

They just continue to improve. There are always mistakes and things to correct but the film was very good. I love the attitude of our team. Defensively, they played intense and physical. We tackled better and got pressure. I was proud of the fact that we didn't give up any points off the turnovers. I'm pleased with the progression of our defense. We had some big plays early in the game that hurt us, but we recovered from that. It was just a really positive night for our defense, holding them to three points in the second half.”

Offensively, the Tigers piled up the second-most total yards in program history – 718 – and he said that all but four players on the travel squad saw game action.

"Offensively, just the explosive plays and we played with a lot of confidence,” he said. “We were poor in short yardage last year but it's been a strength this year. The offensive line was outstanding. We ran the ball effectively and got to play a lot of guys on both guys. We took 72 and I think 68 guys got to play. The second group offensively went in and did a good job. Just overall a very solid day. Special teams were solid, too. Players of the game were the offensive line, defensively it was Spencer Shuey

Andre Ellington
RS Sr. Running Back
#23 5-10, 195
Moncks Corner, SC
View Full Profile missed all but one play of the game with a hamstring injury, while tight end Brandon Ford

Brandon Ford
Gr. Tight End
#80 6-4, 240
Wando, SC
View Full Profile missed a good portion of the game with an abdominal injury. However, Swinney said the only player he would consider questionable at this point is quarterback Cole Stoudt

"Injury-wise we came out pretty good. I'm most worried about Cole Stoudt,” Swinney said. “He had a hit to his sternum. He's pretty sore. The rest of those guys look like they're feeling pretty good today. I think they're going to be fine. Brandon is just kind of bruised in his side. They X-rayed him and he looked pretty good last night. Same thing with Andre. He kind of felt a tweak and we didn't think he could cut it loose. He didn't tear it. He had pretty good motion today. They feel like both of those guys should be fine. We'll see how they'll be in the next few days."

Swinney said he was particularly impressed with the play of the offensive line.

"You rush the ball for over 300 and pass for over 300, that's impressive. We protected very well,” he said. “I thought Brandon Thomas

Brandon Thomas
RS Jr. Offensive Line
#63 6-3, 305
Spartanburg, SC
View Full Profile played as good as he's played in a while. Dalton [Freeman] was solid. Giff [Timothy] had one of his better games.[Tyler] Shatley has been a rock. We took 13 linemen there and we played all 13. Guys like Isaiah Battle

Ryan Norton
RS Fr. Offensive Line
#58 6-3, 270
Mauldin, SC
View Full Profile played a bunch of snaps. When you can get them some quality time, it helps you from a morale standpoint. Not enough has been said about them and the job they've done. That was definitely one of their better performances overall."

"The offensive line can control what they control. They don't make the reads and don't throw the ball,” he said. “They don't make the checks. They have to do their job. Their joy is when the chains move. The confidence is huge when you have a special player leading the team. He's the captain. He's the guy making it all go out there. If we protect, they know we have an opportunity to get big plays with the skill we have on this team. We have a chance to pick up a lot of yards. That's where they're getting their joy … moving those chains. They have 1,000-percent confidence in Tajh Boyd, as they should."

“Both have made plays in critical situations. Look at last year and D.J. was a freshman. He was the leading rusher in the Auburn game. And Hot Rod has earned the trust and confidence of his teammates and the staff. He's very dependable. When Andre went down, I walked over to them and said, 'Y'all have to go. Let's go.' They told me, 'We got it, coach. We got it.' You never know when your number will be called. And Zac Brooks

Zac Brooks
Fr. Running Back
#24 6-1, 185
Jonesboro, AR
View Full Profile coming in, he showed what he's capable of doing. I know he hasn't had as much opportunity but he's improved all year. Another year in the weight room, he could be a powerful runner for us."

On all the injuries Maryland has suffered at QB