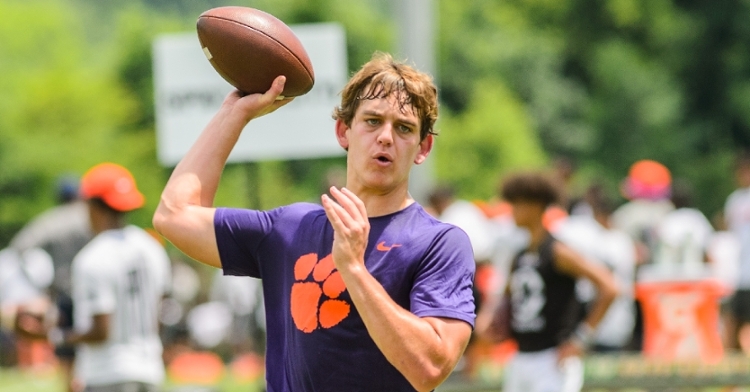 The Sunday morning session of Dabo Swinney’s high school camp lacked the star power of the Saturday afternoon session but there was still plenty of competition, especially with the wide receivers.

However, we will start with visitor Arch Manning, the 5-star quarterback out of New Orleans who has a certain pedigree that everyone knows about. Manning worked out Saturday in the afternoon session and then, along with his dad Cooper and mom Ellen, and then spent time with the coaches at the football facility.

The group then went to Swinney’s house for the evening and the Manning family was back on campus this morning, riding around in one of the big golf carts getting the grand tour. This was Manning’s first visit and the Clemson coaches were hoping to make a good first impression. From everything I understand, that happened and the visit couldn’t have gone any better. As someone close to the proceedings told me, Manning would be a great fit in the Clemson program. It was my understanding Clemson was going to offer, but I haven’t heard anything official.

Hope to have more on that later. Now to camp:

*You may or may not know that longtime defensive coordinator Ted Roof is coaching at Clemson now as a defensive analyst. Roof has coached at places like Alabama and Auburn and Georgia Tech and Penn St. and many other places on the map. He has been coaching the linebackers this week, and it’s obvious that he is one of the guys who really just enjoys coaching. He is very technical in all aspects and doesn’t let any of the campers get away with the slightest imperfection. If they have to run it again, they run it again. Watching Roof work with Brent Venables is fun to watch, and I doubt that a lot of the younger campers have any idea who they are being coached by.

*It’s also a lot of fun to watch the Clemson players act as coaches. Defensive end Myles Murphy was coaching one defensive end – who stood about 5-5 and couldn’t have weighed more than 132 pounds – and kept encouraging the youngster as he ran through some of the tougher drills. It’s not just the 5-stars that get attention and Murphy obviously loved the work ethic shown. (Later found out he is a rising 8th grader).

*With the wide receivers this morning in the A group was Clemson (SC) Daniel product Clay Swinney. Yep, the youngest of the Swinney boys is the third we’ve watched come through camp. Like his brothers, he runs precise routes and has good hands, but I think (apologies to Drew and Will) that Clay might be the best athlete of the group. Swinney played with Danny Pearman’s son, Trent Pearman, at Daniel last season when the Lions won the state championship.

*A couple of other wide receiver notes. A couple of under the radar guys were in to work with wide receivers coach Tyler Grisham. The first one that jumped out to me was a 2024 prospect out of Las Vegas (NV) Arbor View named David Washington. He camped at Ole Miss earlier this week and earned an offer after a vertical jump of 40 inches (his coach told me he’s hit 41). He camped at Alabama yesterday and had long conversations with Nick Saban. UNLV and Washington St. have also offered. He’s one of those guys that the recruiting services haven’t found. Yet.

*Another one that stood is Dutch Fork wide receiver Nick Sowell, a 2022 prospect who has battled injuries but is finally healthy. Georgia St. has offered. He stands 6-5 (and looks taller) and 200 pounds and eats up a lot of ground with his big strides.

*An intriguing young quarterback in the rotation this morning is out of nearby Wren. 2025 prospect Gavin Owens is a rising 9th grader who should play varsity for Jeff Tate this season. He's tall, a lefty, with a smooth delivery and a good arm. He's another out of that program that bears watching. He also works with local quarterback guru Ramon Robinson.

*Plenty more to come after the afternoon session.