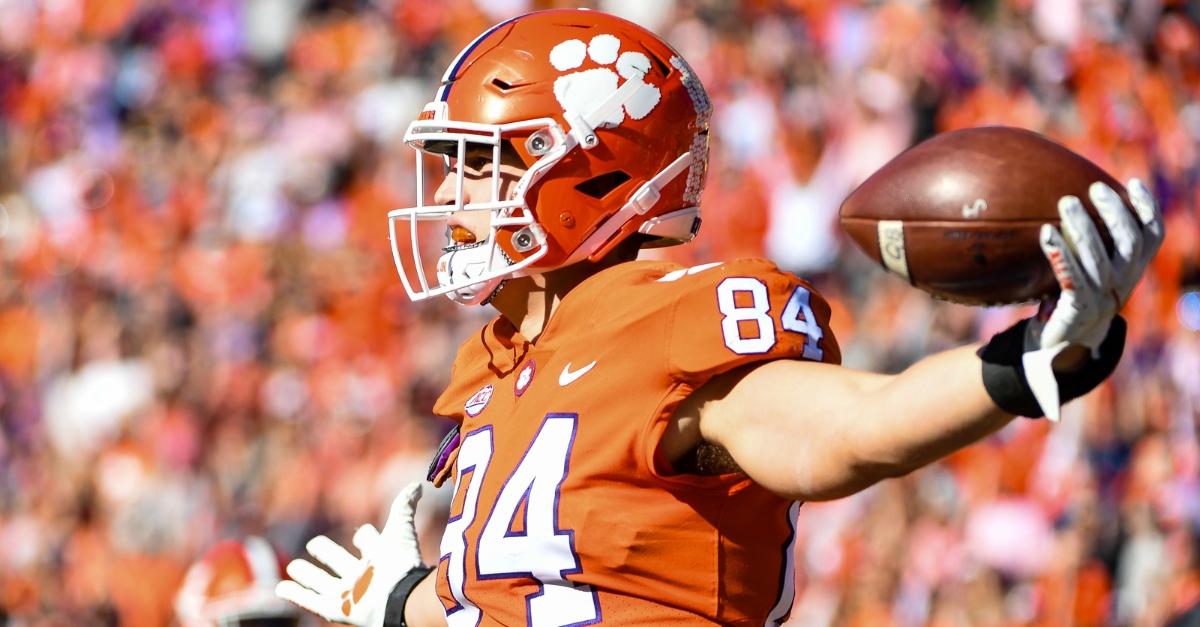 Davis Allen was a top target for Uiagalelei Saturday.

Wake Forest traveled to Clemson on the heels of one of their biggest wins in program history. The Demon Deacons edged NC State in a thrilling shootout that put them in position to win the Atlantic Division for the first time since 2006. The win pushed them to No. 10 in the college football playoff rankings.

Meanwhile, Clemson’s previous game was a struggle against one of the worst teams in the FBS, UConn. They couldn’t run the ball against a defense that everyone had run against successfully. The Tigers entered with a slew of injuries too. Their top four wide receivers from the start of the season were out and QB DJ Uiagalelei was playing through knee and finger injuries.

It is with that backdrop that the Tigers sent a resounding message: We are still Clemson.

Wake Forest had scored 45 points or more in their last four games and 35 or more in every game this season. Despite that, the Deacons’ offense looked overwhelmed as they were quickly swallowed up by Clemson’s defensive line and blitzing linebackers time and time again. They were on their heels from the start. By the time they found a little footing, Clemson’s offense was grinding them up on the ground.

The Tigers controlled the second half en route to a dominant 48-27 victory that extended their home winning streak to 34 games and kept fleeting Atlantic Division hopes alive. The Tigers now need North Carolina to beat NC State on Friday (7:00 pm, ESPN) and then have Boston College upset Wake Forest on Saturday (noon, ESPN2). If both of those games break the Tigers' way, they will win the division and head to Charlotte. Even if they don’t, this win gave Tiger fans a lot to be proud of and plenty of reasons for optimism moving forward.

Clemson’s defense set the tone early by forcing four three-and-outs to start the contest. Brent Venables aggressively sent pressure and Wake Forest couldn’t stop it. The Tigers collected seven sacks and gave QB Sam Hartman little time to ride the “slow mesh” and complete the explosive pass plays that they’ve hit all season long. Wake Forest couldn’t get any traction on the ground either which forced them to lean on an unbalanced pass-heavy approach while their star quarterback was taking a beating.

Seven different players were credited for at least half a sack. DT Etinosa Reuben had a career day with 2 sacks while DE Myles Murphy had 1.5. Linebackers Trenton Simpson and Baylon Spector led the team with nine tackles each. Simpson was frequently in the backfield and had a sack. Spector recovered a key fumble early in the third quarter that set Clemson up to push the lead to 24-10 and begin taking control of the game.

It wasn’t just the front seven. Freshman safety Andrew Mukuba had a big day with eight tackles and two passes defensed. Andrew Booth had a key first-half interception that stopped Wake Forest’s offense on the Clemson 24-yard line. That preserved the Tigers' seven-point lead going into halftime. It was a masterful all-around defensive performance and a reminder that Venables is still the best defensive coordinator in college football.

On Clemson’s first drive, the Tigers efficiently worked their way to Wake Forest’s 33-yard line before Uiagalelei missed Davis Allen and Dacari Collins on consecutive throws. The Tigers settled for a field goal and it felt like “here we go again.” He was not only playing through a knee injury, but he also had a finger on his throwing hand taped up and the accuracy issues that plagued him all season seemed worse.

Despite that, on the Tigers’ very next drive, Uiagalelei broke two should-have-been sacks and rocketed a pass over the defense to hit Beaux Collins for a 52-yard completion. The Tigers eventually punched it into the end zone to go up 10-0.

Uiagalelei wasn’t leaned on as heavily as usual after that, because the Tigers relied on an exceptional rushing attack that had been dormant all season. He only had 11 completions on just 19 attempts. Beaux Collins led the way receiving for Clemson with 4 catches for 137 yards and a TD. Allen had 6 receptions and 53 yards and a TD. All other players combined for just 2 catches for 20 yards.

With an early lead and success on the ground, offensive coordinator Tony Elliott stuck with the run. Even after Kobe Pace coughed up a costly fumble, they kept handing him and Will Shipley the ball. The persistence paid off as the already questionable Wake Forest defense wore down and allowed Clemson to blow the game open with a 21-point third quarter.

“We were able to run the ball and they couldn’t stop it.” – Clemson coach Dabo Swinney

They ran to the outside with tosses more than they had in the past and didn’t over-rely on the inside zone, but when they ran inside, that worked too. The interior line had by far their best game of the season. Several of the inside runs were aided by gaping holes despite the Deacons defense honing in on the run. This was epitomized by Kobe Pace’s 39-yard run in the fourth quarter, which was enabled by an excellent block from Will Putnam on a pull that opened up a wide running lane.

“Those guys did an awesome job. 333 yards rushing and no sacks. 7/11 on third down. It is as good as we’ve been… We didn’t even have to throw the ball… That’s been a beat-up group all year, but today was their best day.” – Swinney on the O-line

Marcus Tate started at left guard, but he was quickly replaced by Hunter Rayburn. Mason Trotter excelled at center and Will Putnam returned to start at right guard after missing last week’s game. Right Tackle Walker Parks was excellent after a few less consistent performances. Left tackle Jordan McFadden had another strong day, and with him already announcing his plans to return for a redshirt senior season, the entire offensive line that just dominated the No. 10 Demon Deacons will be back next season.

Of course, the running backs were excellent too. They hit holes hard, without hesitation and were tough to bring down. Pace, Shipley, and Phil Mafah may be one of the best trios of running backs in the ACC -- if not the country, next season.

The most fun moment may have been when defensive tackle Ruke Orhorhoro entered the game to block for a goal line play. The Tigers did this against Louisville and ran it up the middle. This time they ran a constraint off that and had DJ Uiagalelei run out wide pre-snap – further selling the seemingly obvious fact that this was a run play. Then they handed off to Will Shipley who, instead of running it, leaped into the air and tossed a Tim Tebow-esque pop pass to TE Davis Allen, who hauled it in for a critical early touchdown. The play was dubbed "Bayou" and was originally designed for Travis Etienne.