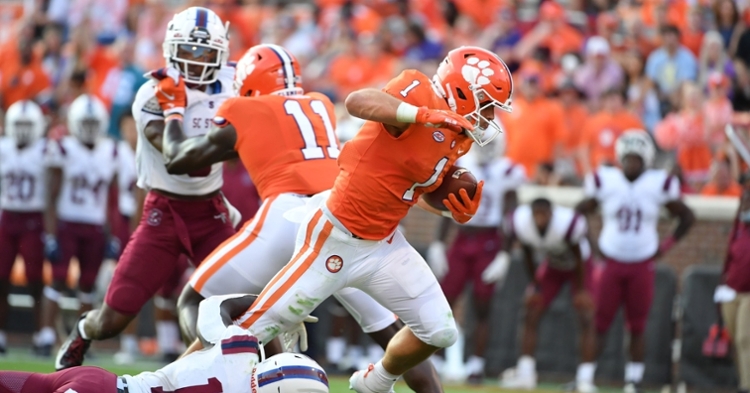 How great was it to see the Tigers take the field in front of a full crowd? The team ran down the Hill, fighter jets performed a fly-over, and the crowd roared. Now it feels like college football is truly back. We even got an Ohio State upset (more on that in a bit) to make last week’s Clemson loss old news.

SC State offered the Tigers an opportunity to get back on track against a lesser opponent before seven straight ACC games. On the night that CJ Spiller was honored, it was fitting that the rushing attack led the way.

The Tigers set the tone with a crisp 72-yard touchdown drive to open the game. It consisted of 61 yards on the ground and ended with a DJ Uiagalelei rushing touchdown. He ran it five times for 23 yards and two TDs in the game. Using the zone read in the red zone does wonders for this offense and it was good to see it back in use after not seeing it against Georgia.

Freshman Will Shipley and sophomore Kobe Pace led Clemson’s rushing attack. Shipley had eight carries for 80 yards and 2 TDs. His speed and shiftiness rightfully get the most attention, but he is also powerful and broke a handful of tackles throughout the game. Pace ran for 68 yards on seven carries and showed good balance, power, and vision.

Lyn-J Dixon got the start at running back, but was limited to four carries because he is in “Spiller’s doghouse.” On the field, he looked sharp, tallying 27 yards (6.8 YPC) on the ground and catching a 14-yard TD.

As expected with the step down in competition, Clemson’s offensive line opened up holes and looked much better. The Tigers will hope to see them continue this level of play as the competition creeps back up the next two weeks.

Clemson’s defense still has not allowed a touchdown this season! The defensive line has improved since last year. Even with Tyler Davis back after missing the Georgia game, Ruke Orhorhoro tied for the team lead with five tackles and looks to be a key part of a dominant Clemson D-line.

Clemson has only gotten five snaps this season from projected starting safeties Lannden Zanders and Nolan Turner. Despite that, the secondary has out-performed expectations. Freshman Andrew Mukuba’s great play has earned him a starting spot and been a big reason for the group’s solid production. Jalyn Phillips and Joseph Charleston also appear to have taken a step. Another safety, sophomore RJ Mickens – a former four-star prospect – snagged his first interception and added a 49-return for good measure. This defense is capable of being the best in the entire country.

After taking seven sacks against Georgia, Uiagalelei was not sacked against SC State. Obviously, this is largely due to the difference in competition level, but DJ also exhibited a much better pocket presence. This was best demonstrated on his 36-yard pass to Justyn Ross. SC State’s defensive end got around RT Walker Parks, and instead of bracing for the sack or running for a few yards, DJ deftly shifted up in the pocket just beyond the rushing defender’s grasp and delivered the ball downfield to a sliding Ross for a big gain.

Unfortunately, he still missed several throws including a wide-open receiver in the end zone and a short screen pass. Both were overthrown with the latter resulting in an interception. Hopefully, we see this happen less often as he develops a rhythm with the receiving corps.

Phommachanh officially returned from a torn Achilles after just five months. That is an incredible recovery time! He had his best in-game performance going 7-for-10 for 75 yards with an interception and his first career touchdown pass. He has struggled in past relief duties, and although he threw an interception, he looked improved. Hopefully, it is a sign of positive things to come.

I would be remiss to not mention Will Taylor. He broke off a 51-yard punt return. He got several run plays and looked electric. He is fun to watch and I hope we see him get a few series at QB and work into the offense wherever possible. What a steal on the recruiting trail.

NC State was favored on the road but lost to Mississippi State. This year seemed poised to be a big one for Wolfpack coach Dave Doeren’s squad, but they never breakthrough.

Florida State was coming off a near-win against Notre Dame and seemed to have turned the corner. Wrong! Florida State looked like they would squeak by Jacksonville State, but a last-second pass from former Clemson QB Zerrick Cooper was reeled in at the 10-yard line. Seminole defenders inexplicably failed to tackle the receiver who scampered to the end zone just as the clock read 0:00. It was a walk-off touchdown and gave FSU their first-ever FCS loss. That program is in shambles. Meanwhile, Notre Dame struggled and barely beat Toledo (32-29). Perhaps they are both bad.

Fortunately, Pittsburgh won in Knoxville over the Volunteers. Pittsburgh, Virginia Tech, and possibly North Carolina seem to be the best teams in the ACC behind Clemson, though Coastal chaos may change that evaluation quickly.

Ohio State lost at home to the Oregon Ducks. The Ducks, led by former Boston College QB Anthony Brown, rolled up 505 yards on the Buckeyes, led nearly the entire game, and looked like the better team. Ohio State has some exceptional, explosive playmakers, but it misses QB Justin Fields. Even more pressing, their defense seems to have taken a step back. They’ve given up 31 and 35 points in their two games this season. This comes on the heels of surrendering 52 points to Alabama in the National Championship. They dropped to No. 9 in the AP Poll.

Finally, Texas went to Arkansas and got completely demolished by the Razorbacks. The Longhorns are a big brand, but they have only one 10-win season in the past decade compared to four losing seasons. They better get a whole lot better before they join the SEC in a few years or it could be ugly.

Welcome to the league. pic.twitter.com/kQX4b1sPWG