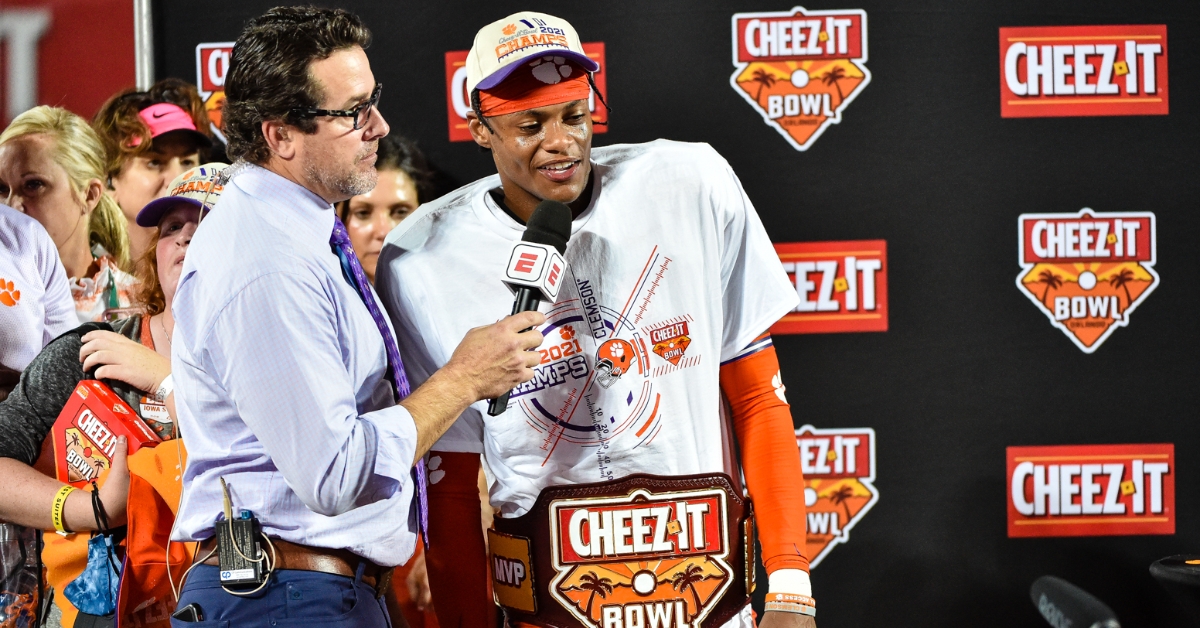 Goodrich put up a big bowl performance to help contain the Cyclones.

The Tigers are Cheez-It Bowl Champions. While it is not a title that will excite Clemson fans, the path from 2-2 to 10-3 should. With two losses in their first four games, the Tigers could have folded. Instead, they gutted out wins, mostly in closely-fought defensive battles, in eight of their final nine games to reach double-digit wins for the 11th consecutive season. Only Florida State (1987-2000) and Alabama (2008-present) have had longer such streaks.

It was Clemson’s defense leading the way once again. Wes Goodwin got his first win calling the defensive plays in place of the departed Coach Venables. His unit looked like Clemson’s usual dominant defense and held Iowa State to just 13 points. Brandon Streeter, calling the offensive plays in place of Tony Elliott, added a few new wrinkles, but largely saw his offense plagued with the same issues they’ve struggled with all year. They did just enough and now will have an off-season to improve under Streeter’s leadership.

Clemson’s defense didn’t miss a beat. They came into the game ranked 7th in yards per carry allowed (2.83 YPC) and continued their success by holding Iowa State to just 66 rushing yards (3.1 YPC). They did this despite entering the game without LB Baylon Spector and losing LB James Skalski early in the contest. The duo represents Clemson’s two leading tacklers.

Unable to get things going on the ground, the Cyclones only handed it off to their running backs 16 times. Instead, they leaned heavily on senior QB Brock Purdy. Purdy was only sacked once but struggled to push the ball downfield or find open receivers as Clemson’s pair of All-Conference cornerbacks blanketed Iowa State receivers.

CB Mario Goodrich had a career day. He had a crazy pick-six that made the difference in the game. It started with DE Justin Mascoll tipping a pass high in the air. Purdy attempted to knock it down as the tipped ball flew back toward him, but he accidentally hit it right into Goodrich’s arms. Goodrich ran it back 18-yards for a touchdown.

Later, on the Cyclones' final drive, Purdy scrambled for a first down, but Goodrich slapped the ball out of his hands. Purdy had to chase the bouncing ball backwards and ended up behind the first down marker upon recovering it. It led to the game-winning turnover on downs. Goodrich won the Bowl MVP Award and Coach Goodwin was properly celebrated in the locker room for a well-called game.

All of us getting out of bed this morning pic.twitter.com/TYeA1EtGNU

From the early-going, it was clear that Coach Streeter’s plan was to find creative ways to get the ball to the only two consistent playmakers on his offense: Will Shipley and Kobe Pace. We saw more plays with both running backs on the field than we had before and the swing pass replaced the wide receiver screen as a staple of the offense. Aside from a pair of drops by Shipley, the duo was excellent. They combined to account for 203 yards from scrimmage, 64% of the team’s offense.

Overall, the play calling was very conservative. Clemson elected not to take a shot at the end zone before halftime. Instead, they missed on a short pass before a failed field goal attempt. In the fourth quarter, they ran a swing pass on 2nd & 17. On the subsequent 3rd & 8 play from the ISU 46-yard line, they kept it on the ground with a sprint draw for three yards and then punted. They appeared limited by a depleted WR corps.

Dacari Collins led Clemson receivers with 56 yards. Beyond him, there wasn’t much production. Beaux Collins had 3 catches for 20 yards and also had two drops. Will Swinney had one catch for 11 yards and Davis Allen had two catches for 9 yards. They took no downfield shots and instead asked DJ Uiagalelei to play the role of game manager. He finished 21/32 with 187 passing yards and 1 INT.

It was a wise gameplan for this opponent and made sense in this context, but it isn’t a recipe for a 2022 ACC Championship and playoff appearance.

Coach Streeter has a tall task ahead of him to get this offense back to where it should be. Clemson finished 13th in the ACC in total yards ahead of only Boston College. While part of this was dictated by conservative play calling amidst defensive battles, there’s no denying that Clemson’s offense fell well short of expectations.

Uiagalelei finished the year with nine passing TDs, 10 INTs, 2,246 passing yards (173/game), and a 56% completion percentage. You have to go back to 2014 to find a Clemson QB with similar numbers. That year Cole Stoudt had an identical 9-10 TD-to-INT ratio to go with a 63% completion percentage as he shared time at QB with Deshaun Watson.

Uiagalelei will have to improve his accuracy if Clemson’s offense is going to open up. Throughout the year, he often missed receivers to the inside or outside which allowed defensive backs to make plays on the ball. Fortunately, he improved as the season progressed. He only eclipsed 185 passing yards once in his first seven games but surpassed that mark in five of the final six games. His pedigree as a prospect and excellent play in two games as a freshman give us reason to believe he has a high ceiling. He’ll have to improve next year as incoming five-star freshman Cade Klubnik will be pushing him.

Improved wide receiver play will have to play a huge role in any potential improvement from the quarterback position. In years' past, Clemson QBs have had wide open streaking receivers to hit in stride for big gains. Those opportunities were rare this season. Drops also plagued the passing game. It wasn’t just obvious drops though. Often wide receivers failed to bring down 50-50 balls or passes that were slight misthrows, but catchable.

Joe Ngata, EJ Williams, Dacari Collins and Beaux Collins figure to lead the 2022 WR corps. In the slot, Troy Stellato, who redshirted this season, and Brannon Spector, who missed this year with injury, could play major roles. Freshmen Adam Randall and Antonio Williams could also make an impact. With little proven production, this could be an area where it makes sense to supplement with the transfer portal. Whatever the case, this may be the most crucial area of improvement for next year’s offense.

The position group in the best shape is likely running back. The Tigers will return Will Shipley, Kobe Pace, and Phil Mafah and likely add one incoming freshman. Clearing holes in front of them, the offensive line brings backs all five starters from the Cheez-It Bowl plus Mason Trotter. They’ll also get Dietrick Pennington back from injury and have Tristan Leigh and Ryan Linthicum coming off redshirt years. This group finally started to jell in the final three games of the year and stands to be the most improved next year.

I hope you enjoyed these Stats & Storyline articles this season. While the year certainly didn’t turn out the way I expected it, I enjoyed analyzing the ups and downs with you and reading your comments. We will have an interesting off-season with plenty of room on the roster for more incoming freshmen and transfers and I’m sure a lot of discussion about how the offense will look next year. Thank you for reading and Go Tigers!