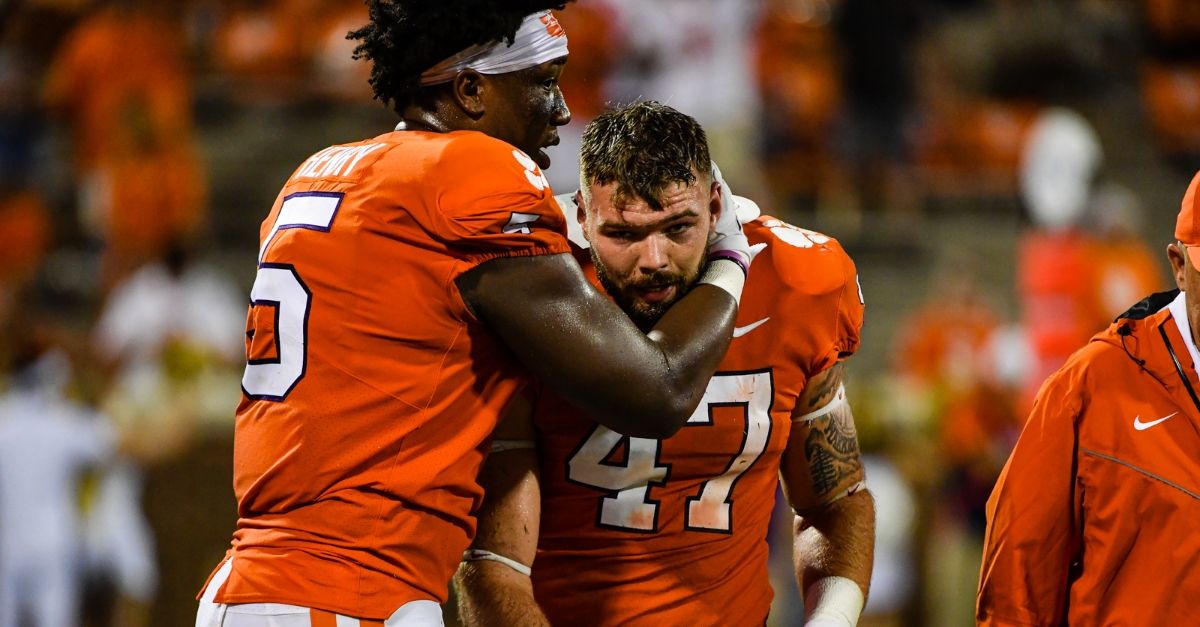 James Skalski made some big plays late to preserve the win.

With their narrow 14-8 win on Saturday, the Tigers extended their home win streak to 30 games and beat Georgia Tech, once a thorn in their side, for the seventh time in a row.

While the win keeps all of Clemson’s goals in play, their offensive woes grew more concerning. Fortunately for Dabo Swinney's team, a historically good Tigers defense saved the day. We’ll start our analysis on offense and end on a positive note with this superb defensive effort.

“Listen, we’re kind of who we are right now. We’re young on that side of the ball (offense). We’ve got some guys who are going through some growing pains… Obviously, we’re led by our defense right now, as we knew we would be, but we took some steps forward today. It might not necessarily be things that make people go wow and see, but I see. There’s a lot of things tonight that we can learn and teach and grow from.” – Swinney

Clemson’s offense accumulated 284 total yards against a Georgia Tech defense that allowed an average of 287 yards to Northern Illinois and Kennesaw State. Clemson’s passing attack lacked explosiveness with no pass going for more than 17 yards. Georgia Tech allowed 13 yards per completion coming into the game, but held Clemson to just seven. Part of that was dictated by a strategy the Yellow Jackets employed to make Clemson dink and dunk their way down the field until a turnover or penalty derailed the drive. Being flexible and taking what the defense gives you is generally good football, but against below-average opponents like Georgia Tech, you’d like to see Clemson set the terms or at least run for big gains if that’s what they’re giving them.

Uiagalelei and his receivers appear out of sync. It isn’t simply Uiagalelei missing on throws, rather the receivers aren’t where he expects them to be. For example, there was a rare deep throw to Ngata where he had some separation, but the throw was far off to his right. As an observer, it is impossible to know if he ran the wrong route or if Uiagalelei made the wrong throw, but it must be one of those. Uiagalelei said when it all clicks the offense will “bust.” Hopefully he can get on the same page as his receivers this week and “bust” in Raleigh.

Ross and Ngata combined account for more than two-thirds of Clemson’s receiving yardage in this game. On the season, the duo accounts for over half. Ross had his best game of the year against Georgia Tech and nearly looks “back.” After two injury-riddled seasons, Ngata is proving his top-tier recruiting status correct.

The rest of the pass catchers are struggling to find consistency. Davis Allen is third on the team in receptions with six. Braden Galloway has just 14 receiving yards and several drops. Frank Ladson has only 3 receptions and seldom seems to be running free despite his excellent speed. There is room for freshmen Beaux Collins, Dacari Collins, and Troy Stellato to make an impact when they’re ready. This receiving corps misses Brannon Spector. Let’s hope he can get healthy soon and provide relief.

Without question, the offensive player of the game was Shipley. He had both of Clemson’s touchdowns. His 21 carries are the most Clemson has given to a running back since Travis Etienne’s 28 carry performance against South Carolina all the way back in 2018 – three seasons ago. He has emerged as Clemson’s best offensive weapon.

While his speed is what gets people’s attention, power running was the focus on Saturday. He broke tackles throughout the game, but most impressive was his second touchdown when he pushed the pile into the end zone:

I absolutely loved seeing Uiagalelei run the QB Power. Even though he eventually coughed up a big fumble, he proved to be an effective runner in the Tajh Boyd mold that we were expecting. It is vexing that it took two and a half games before we started seeing this with regularity, but hopefully it sticks. Swinney seemed to imply it may.

“He’s a load. He ran with some freaking toughness and a lot of heart. When you can run the ball with Shipley the way we did and then get an extra hat and put that big QB in the mix and his confidence in how he ran tonight, I think that will serve us well moving forward.” – Swinney

I would be remiss to not highlight the strange late-game decisions in this game. After Clemson scored to go up 14-3, Georgia Tech was in no hurry to score. They routinely ran the clock down to just a few seconds before snapping it. After burning 6:53 of clock on a 70-yard drive, they inexplicably settled for a field goal with just 1:19 to go. Against all odds, they made the field goal, got the onside kick, and got to the 2-yard line before Clemson stopped them.

After Clemson got the ball back, they just needed to lose fewer than two yards on a running play to close the game. Instead, they intentionally took a delay of game penalty. Swinney explained:

The subsequent play was a hand off out of the shotgun which was fumbled and recovered in the endzone for a safety. In explaining why they lined up in shotgun instead of under center, Swinney said:

“That’s just what we do. That’s what we’ve always done… We went with what we’re comfortable with.”

Those in the business world are used to hearing the mantra “never do something just because that’s how your company has always done it.” It was peculiar to hear Clemson doing exactly that. I understand the fear of a fumbled exchange (which is ironic because they fumbled anyway), but ESPN’s Dan Orlovsky said it best when he wondered:

“If we don’t know how to take under the center snaps, what are we doing?” – Orlovsky said on the broadcast.

Clemson had two incredible goal line stands that made the difference in the game. At the end of the first half, Clemson stopped Georgia Tech on the five-yard line, forcing a field goal. Then, at the end of the game, Clemson got a turnover on downs at the two-yard line which set off the strange turn of events leading to the safety described above. Clemson’s defense has given up 12 points on the entire season. Clemson’s offense has given up 9.

Linebacker LaVonta Bentley may have been the defensive player of the game. He racked up 13 tackles including a sack. James Skalski was the hero of the game though. On Georgia Tech’s late 4th down attempt, Skalski somehow saw the shovel pass coming even though the pitch to the outside looked more obvious. If he doesn’t sense it, the Yellow Jackets likely score there and have a 2-point conversion attempt for the tie. Coaches called him the “heart of the team” and said “he’s just so smart.” He’s also a great tackler with good speed. Getting him back for a sixth year was a huge break for Clemson.

Andrew Booth had an outstanding open-field tackle on a key third down to force a punt. Oftentimes cornerbacks can cover but don’t love tackling. Booth can do it all. Bryan Bresee is dominant. He has taken the step in his progression from excellent freshman to All-American caliber. I expect both Booth and Bresee to be first round picks when they eventually make the jump to the NFL.

Finally, Andrew Mukuba continues to stand out. He is right up there with Shipley for freshman of the year. He had a big pass breakup and continues to make it tough to pass on Clemson’s defense.

The Tigers head to Raleigh for the Textile Bowl next weekend. NC State’s offense was stymied by Mississippi State and very well may not find the endzone against Clemson. It’ll be fun to watch this elite defense and see if they can extend their streak of allowing no touchdowns into a fourth game.