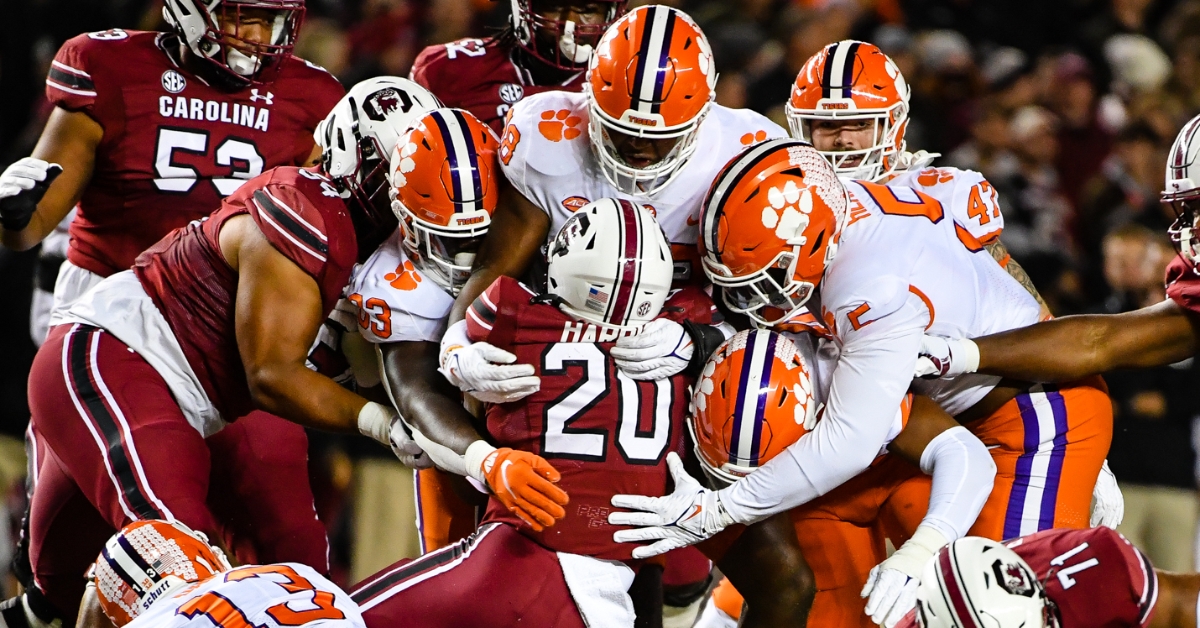 South Carolina had nowhere to run on Saturday against Clemson's defensive front.

After SEC scheduling decisions put a pause on the Palmetto Bowl last season, it returned this week and felt just like old times. Williams-Brice Stadium was loud and raucous at the start, but the Tigers took control early and never relented. They dominated the line of scrimmage on both sides of the ball, allowing them to lean heavily on the running game on offense, while completely taking it away on defense.

Clemson extended its win streak over South Carolina to seven games, tying the longest win-streak in the rivalry (Clemson: 1934-1940). The win pushes the Tigers to 9-3 and a bowl win would continue their decade-long streak of winning 10 games per season.

The Tigers continued the wildly efficient ground assault that gashed Wake Forest a week ago. Will Shipley exploded through holes on his 19 carries for 128 yards and a TD. Kobe Pace ran for 58 yards and a TD on just seven carries. Phil Mafah added 43 yards on 11 carries and gave the Tigers their final TD in the contest. The early season acrimony with Lyn-J Dixon (who announced recently he is transferring to West Virginia) is now a distant memory. Coach CJ Spiller’s running back room is firing on all cylinders.

Clemson’s offense has undergone an unexpected transformation in November. In the first two games of November (at Louisville, vs. UConn), Clemson threw the ball 88 times while only generating 3.3 yards per carry on the ground. In the last two games (vs. Wake Forest, at South Carolina), Clemson passed it just 39 total times and produced a whopping 6.2 yards per carry. 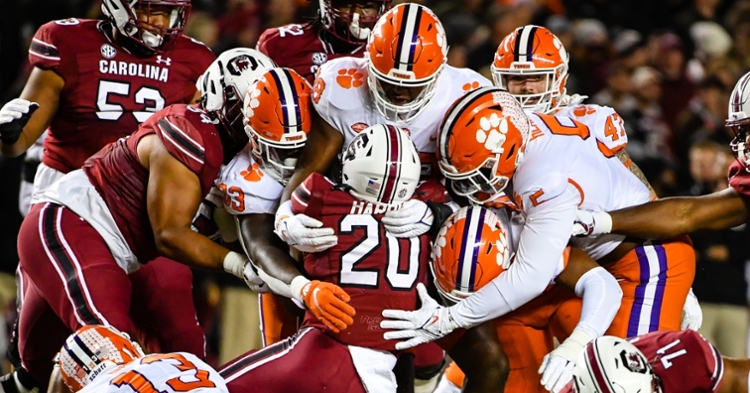 South Carolina had nowhere to run on Saturday against Clemson's defensive front."

Getting some key players healthy certainly played a role in that. Shipley and Pace were banged up in the game against Louisville and subsequently missed the game against UConn. Right guard Will Putnam was also out for the UConn game. All three were back and appeared at or near 100% against Wake Forest and South Carolina.

It is more than just health though. Mason Trotter seems to have settled in at center. Hunter Rayburn, who played at center earlier in the year, took over for freshman Marcus Tate at left guard during the Wake Forest game and started there against the Gamecocks. He is also playing well and seems much improved from earlier in the season.

Back in fall camp, the coaches’ soundbites about the offensive line gave us all a ton of optimism. It didn’t materialize for most of the season, but it is happening now. All five starting offensive linemen along with the top three running backs are planning to return next season. Clemson may – for the first time in years – be a heavily run-first team in 2022.

Clemson’s dominance on the ground allowed them to hide a struggling passing game. DJ Uiagalelei continues to have accuracy issues. He attacked one-on-one coverage with a deep ball early in the game but threw it on the wrong side of the receiver leading to an interception. He had a few others that weren’t misses but could have been caught if the ball was a bit more on target. The pass catchers were not blameless either. Beaux Collins dropped a pass that would have netted a big gain. Will Shipley dropped a quick pass in the backfield too.

As a result of these struggles and the continued success in the running game, the staff leaned heavily on the latter. Clemson threw the ball just seven times for 34 yards in the second half. With the way the Tigers’ defense was dominating the Gamecocks, they opted for conservative run plays on two different third-and-long situations to avoid turnovers and milk clock. I can’t say I blame them. Dacari Collins was the lone bright spot in the passing game. He had two receptions for 50 yards.

Despite defensive end Xavier Thomas being out with injury, Clemson’s defense had their way with the Gamecock’s offensive line. Gamecocks running backs had nowhere to run and collected just 38 yards on 17 carries (2.2 YPC). Trailing from early in the game and getting no traction on the ground, South Carolina threw the ball 42 times but connected for just 19 completions and 163 yards – much of which came in garbage time. The Gamecocks started Jason Brown at quarterback but replaced him with Zeb Noland after Brown threw two interceptions.

With Thomas out, defensive end KJ Henry started and had one of his better games as a Tiger. He collected the team’s only sack. Henry was a five-star recruit back in 2018, and while he has certainly contributed, he hasn’t lived up to the hype that comes with a five-star rating. He already has a degree in sports communication so he could choose to move on from college and begin a traditional career, but as a redshirt junior, he could also return for another season and likely be a starter. If he can play like this for a whole season, he could become an NFL draft target.

Myles Murphy didn’t collect any sacks but hurried the QB four times. Linebackers Baylon Spector and James Skalski led the team in tackles with six each.

Andrew Booth is making a case for being one of the best cornerbacks in Clemson history. He had two interceptions in this contest, giving him three on the season and five for his career. In addition to being good in coverage and having good hands, he is an outstanding tackler.

Andrew Booth is projected to go in the first 15 picks of the NFL draft with several mock drafts showing him going at pick No. 11 to the Philadelphia Eagles. He should be one of the first two cornerbacks off the board.

BT Potter had another perfect game and is now 16-of-20 on the season with three of his four misses coming in the Florida State game. He is 9-for-11 on field goals of 40 yards or further. With Clemson’s conservative ground and pound offense of the last two weeks, his excellence is all the more critical. He’s truly had a “magical” season:

3 more points to Mr. Potter. A trio of bombs today for the wiz kid. pic.twitter.com/VNSzJf6rvp

It was an exciting Rivalry Week in college football. The biggest story was Michigan’s 42-27 upset of No. 2 Ohio State. Michigan pounded them on the ground for 297 rushing yards. The Wolverines had lost the eight prior meetings and, like the Palmetto Bowl, did not play last season (COVID cancellation on Michigan's part). For Ohio State, it was their second loss of the year, which eliminates them from the Big Ten Championship game and College Football Playoff.

Oklahoma State also snapped their ugly six-game rivalry losing streak by beating the Sooners. If Oklahoma State can beat Baylor in the Big 12 Championship next week, they may be selected for the playoff over Notre Dame, who will be idle next week with no championship game to win as an independent. Many would be pleased to see the committee show that conference championships still have a lot of value.

Auburn forced four overtimes against Alabama, but the Crimson Tide came up with clutch plays down the stretch to steal the victory in Jordan-Hare Stadium. The Crimson Tide are still in the playoff race, but it finally looks like Georgia’s year to knock them out. Florida managed to beat Florida State in a close contest even though they seemed to be plummeting, while Florida State was playing decent football. It will deny Florida State a bowl and the valuable bowl practices that come with it. It is really a wonder that South Carolina beat both Auburn and Florida in recent weeks given how hapless the Gamecocks looked against Clemson.

Wake Forest took care of business against Boston College and clinched the Atlantic division. It was actually a relief for many Clemson fans because North Carolina blew a 9-point lead in the final two minutes against NC State. Had Wake Forest lost, NC State would have won their first-ever Atlantic Division. Now, Wake Forest will play Pittsburgh. Although Pittsburgh was much more impressive in their game against the Tigers than the Demon Deacons, they’re a very pass-oriented team and may not be well-equipped to attack Wake’s weakness in run defense.

For the Tigers, it will be a waiting game to see which bowl selects them. Things could change, but an SEC matchup in the Gator Bowl against Tennessee, Arkansas, or Texas A&M could be on tap.