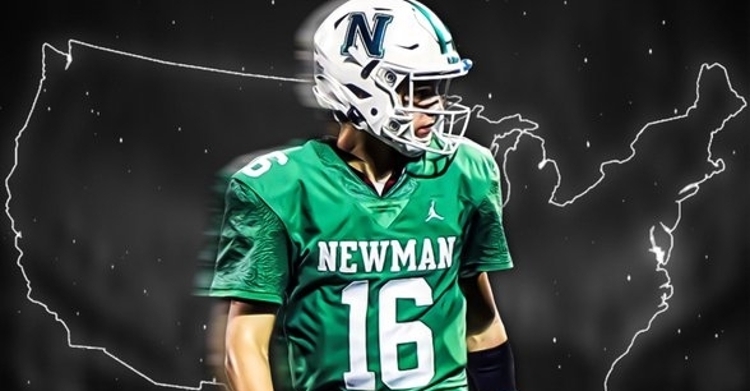 Clemson head coach Dabo Swinney’s high school camps are set to resume next month, and it’s obvious from the early returns that they won’t lack for star power. And when it comes to star power, there isn’t a family name that says that for quarterbacks more than the last name Manning.

Arch Manning is a 2023 quarterback prospect out of New Orleans (LA) Isidore Newman who stands as one of the most intriguing prospects over the next few recruiting cycles. He’s the grandson of Ole Miss great Archie Manning, the son of Cooper Manning, and the nephew of former NFL quarterbacks Peyton Manning and Eli Manning.

Manning already boasts offers from Alabama, Boston College, Duke, Georgia, LSU, North Carolina, Notre Dame, Ole Miss, SMU, Tennessee, Texas, and Oklahoma. He’s already regarded as a 5-star prospect by 247Sports, and that service has Manning rated as the No. 1 pro-style quarterback in the country for his class. As a freshman, he led New Orleans Isidore Newman to a 9-2 record and second-round playoff appearance in Louisiana's Division III bracket. In 2020, he led Newman to a 9-1 record and Louisiana Division III state semifinal berth as a sophomore.

Manning already stands in at 6-4, 208-pounds, and has the frame to grow. Add in the bloodlines and he will be one of the most sought-after recruits for the 2023 recruiting cycle. Clemson, which doesn’t offer freshmen or sophomores, gets the chance to see Manning in person when he visits for Swinney’s camp. He will make the trek to Clemson alongside his brother, center Heid Manning.

The Manning brothers are scheduled to be at Clemson June 8-9. The Mannings will then head to Texas the following weekend to camp at SMU and Texas. The next weekend they will head to Tuscaloosa and Alabama, and then spend the final weekend with the Bulldogs of Georgia in Athens.

Does Clemson have a shot? His father, Cooper, has said that the family hasn’t been able to take any visits due to COVID and hasn’t been able to meet with any coaches in person. This will give Arch and the entire family a chance to meet with Swinney and his coaching staff, take in the football operations center, tour the campus, and see all of the facilities. Once the summer visits are over – and he plans to see if he can add more to the schedule – we should have an idea where Clemson stands in the pecking order.

Of course, the Tigers have plenty to sell when it comes to quarterbacks. Deshaun Watson has turned into an All-Pro in the NFL and led the Tigers to a National Championship, and Trevor Lawrence led the Tigers to a title as a freshman and was recently the No. 1 overall pick in the NFL Draft. The Tigers already have DJ Uiagalelei on campus – a future star – and 2022 commit Cade Klubnik is out of the storied Westlake program in Austin, Texas.

Nelson Stewart, Manning’s coach at Isidore Newman, told the Indianapolis Star that his quarterback has it all.

What Stewart doesn’t do is compare Manning to the other members of the family.

"He's his own entity," said Stewart. "We tread lightly in terms of comparing Arch. He kind of likes to compare himself to his grandfather, which I think is kind of cool. He is a very humble, laid back, unassuming young man. He's very authentic. His work ethic is great. He is one of the guys. He works his tail off. He’s also a student of the game. He likes to break things down. He likes to look at coverages, name plays, do concepts."