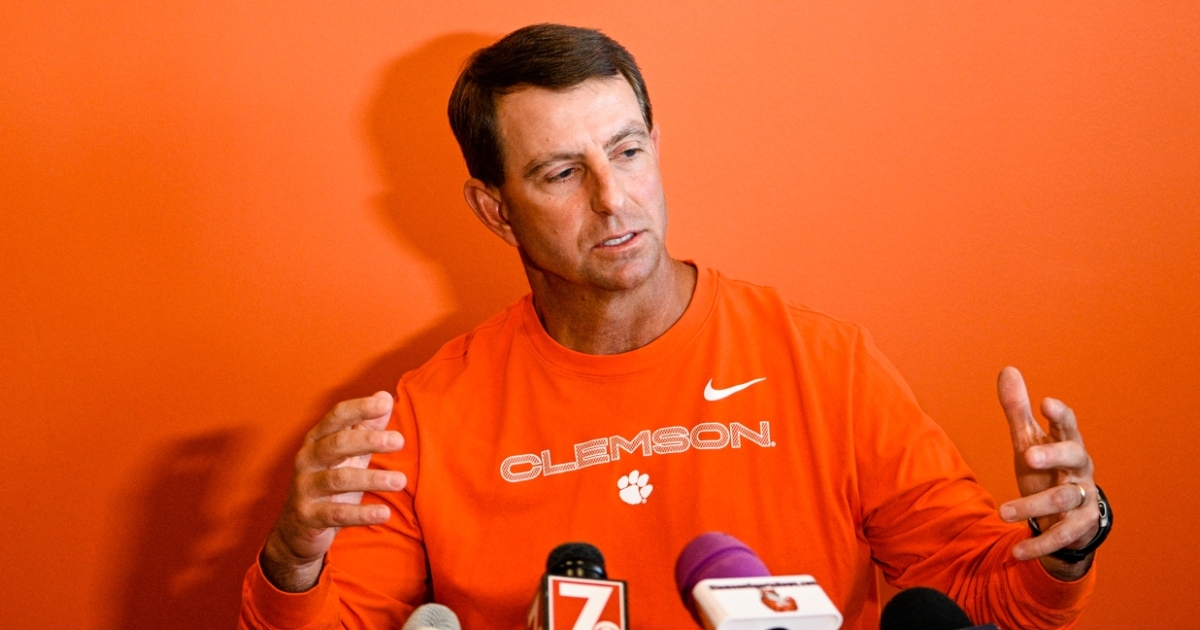 Clemson’s football team held the first practice of the spring late Wednesday afternoon on the practice fields outside the Reeves Complex, and there are plenty of team-related news and notes to pass along.

The most noticeable thing about the start of practice – beyond the 80-degree, sunny weather with a cool breeze – was the absence of so many notable players. Head coach Dabo Swinney ran through a list before the start of practice and there were several big names on that list that will either miss the entire spring or a sizable portion of it.

Several players will be out over the next month and even into early May – Will Shipley, Kobe Pace, EJ Williams, Bryan Bresee, Davis Allen, Malcolm Greene, Tyler Venables and Sage Ennis. Shipley was helping CJ Spiller coach the running backs, which is a very slim group.

Cornerback Fred Davis is in a green jersey and should be ready to go Saturday. Tré Williams was running laps around the field and looks fantastic, he just has to get his shoulder healthy. Offensive lineman Dietrick Pennington is in green but should be able to contribute soon. Safety Lannden Zanders will be in a green jersey most of the spring and will miss the contact work.

*Will Putnam has shifted over from right guard to center, while Mitchell Mayes has stepped into that right guard spot.

*I walked out onto the field to watch the quarterbacks, and everyone seems to be excited about the progress of quarterback DJ Uiagalelei. He is noticeably slimmer – he’s lost around 30 pounds – and one observer leaned over to me and said, “We are expecting big things out of 5 this year. He is in a different space right now than he was at any time last season.”

Uiagalelei was sporting a huge brace on his right leg, but the splint on his throwing hand (broken finger) is gone. He moved better than at any point last year and the ball looked different coming out of his hand. It’s early, and it’s the spring, but he looks like a different player.

*There is no denying the accuracy or the arm strength of freshman quarterback Cade Klubnik. He checks off all the boxes and it will be fun to see him do live work.

*Swinney gathered the team at midfield after stretching and had them sing happy birthday to David Saville.

*Freshman wide receiver Adam Randall looks the part already. He was impressive doing early route work. Troy Stellato was returning punts and like Uiagalelei, looks better now than he did at any point last season when he battled a rash of injuries. Slot receiver Brannon Spector was on the field for the first time in a year and looked fantastic – he was taking snaps with the first team.

*Linebacker Trenton Simpson has moved from the Nickel/SAM spot to the WILL spot occupied by Baylon Spector last season. Swinney told us that is his longterm home. LaVonta Bentley and Keith Maguire are playing MIKE, with Barrett Carter playing that Nickel/SAM spot.

*A lot of former Tigers are on staff, especially guys from early in Swinney’s tenure. Tajh Boyd, Antoine McClain, Tyrone Crowder, Stephone Anthony, Corey Crawford, Ricky Sapp, Cole Stoudt, etc. Anthony and Crawford are in their first spring and looked like they were having a ball.