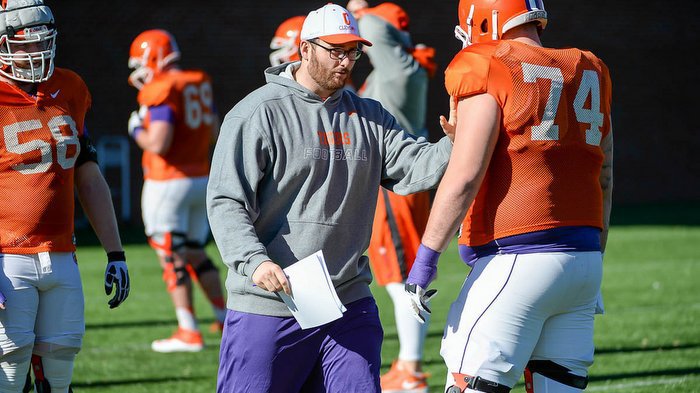 Thomas Austin will help coach the offensive line this season

Reid Webster
RS Sr. Offensive Tackle
#77 6-3, 300
Woodstock, GA
View Full Profile and will have to replace that experience with a mix of young but talented players and veterans looking to make the leap to the next level.

Taking part of what we used for our projected starters story earlier this week, we take a look at the positions and the battles that could take place.

Isaiah Battle
Jr. Offensive Tackle
#79 6-7, 285
Brooklyn, NY
View Full Profile . Battle simply needs to overcome his inconsistency and – for one season – not battle the coaches at every turn. Battle has the talent to earn a high-round draft pick in the NFL, and had decent numbers last season - he had 18 knockdowns in 824 snaps over 12 games (11 starts). The coaches love Battle’s athleticism, and he was downfield blocking on a lot of the jet sweep plays to Artavis Scott

One of the four freshman could get into the mix here – Mitch Hyatt. Hyatt played left tackle all through high school and was a first-team All-American by MaxPreps.com, Parade and USA Today as a senior. He was also rated as the No. 2 offensive tackle in the nation by ESPN. Hyatt’s technique is as good as you could ask for coming out of high school, but he came to Clemson weighing 270 pounds. He needs to get stronger and add a little more weight to his frame, but when he does he is going to be a major factor.

The left guard spot appears to be between Eric Mac Lain

The center spot will provide another healthy dose of competition between Ryan Norton and Jay Guillermo. Norton has seen significant action at both center and offensive guard and has 49 knockdowns in 1,855 snaps over 38 games (24 starts) in his career. Guillermo is considered by many to be more physical at the point of attack and logged 207 snaps in 2014. A foot injury caused him to miss the middle part of the season. This will be another battle to watch this spring, and the starter here might not be determined until just before the start of the season. A lot could also depend on if Norton has to move to guard.

Tyrone Crowder
RS Fr. Offensive Guard
#55 6-2, 322
Marston, NC
View Full Profile has been groomed for the right guard spot, and you have believe the coaches will give Crowder every chance to earn the starting job. Crowder looks the part of a big, intimidating lineman. He is a powerful run blocker who is still learning to pass block. He had five knockdowns in 203 snaps over six games (one start) and had two knockdowns in 34 snaps against Oklahoma in the bowl game.

Over at right tackle, is this the time that Joe Gore

Joe Gore
RS Jr. Offensive Tackle
#73 6-5, 283
Lake Waccamaw, NC
View Full Profile plays up to his potential? Gore was lauded by the coaches during fall camp last year and it appeared he had turned the corner. However, Gore struggled against Georgia and Kalon Davis was moved to the right tackle spot early in the season. Gore still managed to log 237 snaps in three starts, and another spring should give him the time he needs to complete the transition from defense. He has the size (6-5, 290) and the athleticism to be an outstanding right tackle. Maverick Morris

Maverick Morris
RS Fr. Offensive Line
#69 6-4, 291
Broxton, GA
View Full Profile played some tackle last season, with two knockdowns in 59 snaps over four games. Morris has added weight and muscle and while I don’t expect him to contend for a starting spot this season, he could be a very capable backup.

That brings us to the redshirts and the freshmen, and there are a bunch to go along with Hyatt, who we have already mentioned. Hyatt could get into the conversation at that right tackle spot, but so could Jake Fruhmorgen. From a size and technique standpoint, Fruhmorgen might actually be the one player most ready to play out of the freshmen.

Fruhmorgen was rated as the No. 7 offensive tackle in the nation by ESPN, and he played in the U.S. Army All-American Bowl and played center and guard in that game to show off his versatility. However, with his size (6-5, 285) he is better suited to tackle.

Justin Falcinelli
Fr. Offensive Tackle
#50 6-5, 300
Middleton, MD
View Full Profile redshirted last season and has the size (6-3, 305) to jump into the conversation at one of the tackle spots. The coaches raved about Falcinelli and Taylor Hearn

Taylor Hearn
Fr. Offensive Line
#51 6-3, 305
Williston, SC
View Full Profile all last season, and Hearn is another redshirt freshman who will get an extended look this spring. Hearn (6-5, 325) is another big one who could play more than one spot along the line. We will know fairly early in camp where he will land.

Another true freshman is Noah Green, who is best suited at guard but could also get a look at center. Add in Zach Giella – another one who can play guard but played tackle in high school – will also get his share of reps.