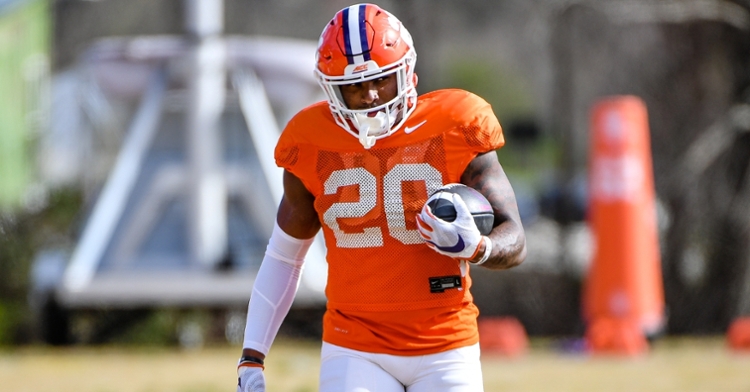 Kobe Pace has been a standout during spring practice.

Spiller, in his first season as the Tigers’ running backs coach, has a room full of talent with which to work. There are veterans such as Lyn-J Dixon and Chez Mellusi and Darien Rencher who have played a lot of snaps, emerging star Kobe Pace, another veteran in Michel Dukes, and freshmen standouts Will Shipley and Phil Mafah.

He was asked if there was a pecking order – a depth chart of sorts – in his room and he went into coach mode and said the spring is all about evaluation and that the depth chart would come later.

"I haven't sat down and said this guy is the No. 1 starter. It's the spring, it's the evaluation standpoint right now. It's been a very healthy competition,” Spiller said. “They all bring something totally different to the table.

"I wouldn't say we have a pecking order as far as 1, 2, 3. We still have a long way to go before we come out with an official depth chart. That's the beauty of this sport, all of those guys know someone has to run out there first. And some guys have to be backups. But I tell them they're just one play away from being a starter."

Spiller said it was time for Dixon to take the next step.

"I'm looking forward to Lyn-J taking his game to a new level. He has the talent, now it's time for him to go out there and do it,” Spiller said. “It comes through practice and reps and learning how to practice. He practices hard, but alright now can you practice smart? There are different things I want to see from Lyn-J, but those are things I'll keep between me and Lyn-J as we continue to go through the spring.”

He then compared Pace to former Georgia standout Nick Chubb.

"Kobe is a sophomore. Second year in system. Running style very unique. If you wanted to compare it, kind of say that Nick Chubb type of comparison,” Spiller said. “Big back with power but he has the speed. I've been very pleased with what he's done so far. He still has a long way to go. He took the right strides from Year 1 and Year 2. To me, that's what you always want to see as a coach. In the NFL, that's what guys always want to see— the jump guys make from Year 1 to Year 2, and he's made a tremendous jump so far. He has to continue to work and he knows that."

Everyone is intrigued by the possibilities presented by the freshmen, Mafah and Shipley, but Spiller preached caution.

"Both Will and Phil have looked great so far. They are just freshmen so they are going to make mistakes along the way because it's a new system,” Spiller said. “Will didn't have chance to play high school ball last fall, so take into account that he hasn't played ball in over a year. So you have to just be careful with him and make sure he comes along properly.

"Phil has looked awesome. He's as good as advertised. Kind of reminds me of that old James Davis and myself, but you don't want to put that type of pressure on them. I tell both of those guys to be themselves. Don't worry about high expectations other people have for you. Both have been done at tremendous job of that so far."