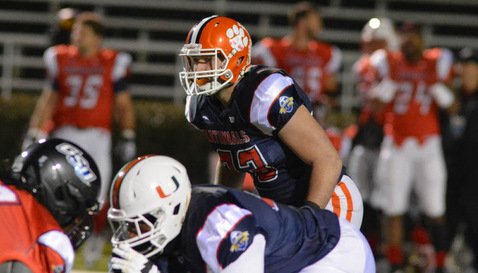 Shuey was a standout at last week's College All Star Bowl

The images of Spencer Shuey

During the Tigers’ thrilling 40-35 victory over Ohio St. in the Orange Bowl in early January, Shuey made it look like he was on mission to make Buckeye quarterback Braxton Miller aware of his presence. Through four quarters, Shuey pummeled running backs, covered tight ends and sprinted sideline to sideline on almost every play.

However, he will best be remembered for his hits on Miller. After one particularly brutal hit, game analyst Matt Millen looked at the pain on Miller’s face and said what would become a familiar refrain.

“He’s a hurtin’ buckaroo,” Miller said many times throughout the second half. Overall, Shuey had nine tackles, two tackles for loss, one sack, and a crucial recovered fumble in the fourth quarter in 72 snaps. He was named co-defensive player-of-the-game by the coaches, and he told TigerNet this week that he feels like he saved one of his best performances for last.

“I definitely consider it to be one of my best games,” Shuey said. “Having a whole month to prepare and watch film helped me take advantage as much as possible. Then, you had the added emphasis of how emotional it was, with it being the last game for the seniors and some of the juniors. There was also the stage it was on, with it being a BCS game, and we wanted to end our career at Clemson on top, and we knew we could do that by winning that game. That motivated me to go out and perform well.”

I asked Shuey what will be his best memory from that game, and for those of us who have had the privilege of covering Shuey during his time at Clemson, his answer came as no surprise as he gave credit and praise to his teammates.

“I remember just how good the Ohio St. offense was, but I feel like our defensive line was the main reason we won that game,” he said. “That was no easy feat going against their offensive line. They have some huge guys, and they are all NFL-type players. They will all get a chance to play in the NFL, and that was a true test for our defensive line. They held their own, and that allowed the linebackers and defensive backs to play free and move around. That was what stood out to me.”

Shuey said he was barely aware of his own performance, that once the hitting started he was in a zone of his own.

“I just tried to block everything out. All I could hear and see were my teammates and coaches,” he said. “I just blocked everything out, and really didn’t hear anything that would cause a distraction. I didn’t hear if the other team was talking to me or not. It was just about making a play, and then moving on to the next play.”

Last weekend, Shuey got a chance to put his talent on display for NFL scouts when he played in the College All Star Bowl at Furman.

“He is a funny, funny guy,” he said. “I enjoyed being around him, and you can tell that his mentality is one of an old school football coach. That was good for me, because I feel like I am an old school, blue collar linebacker.”

Next up for Shuey is Clemson’s Pro Day on March 6th.

“I am looking forward to the individual interview sessions where I will be able to express my enthusiasm for the game,” he said. “I think I can play at the next level. The biggest thing I have been working on is what I’ve heard scouts say is questionable about me – my speed and the ability to change direction. I want to go out there and show them what I can do, and think I can prove that in position drills.”

“But I do think I have the ability to play in the NFL. I understand that is a whole other level, and they are the best athletes in the world. That will be a challenge for me, but I think I have the mindset and the work ethic to do what it takes to make it on a team and be able to contribute.”