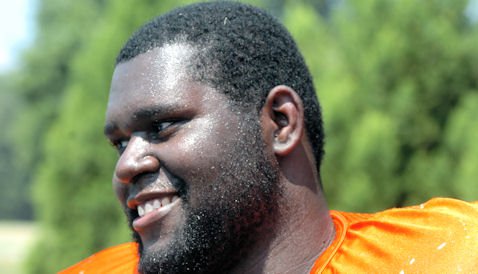 CLEMSON – The Clemson Tigers go into 2011 with an experienced offensive line, but one potential issue that faces the unit is depth.

View Full Profile , a 6-foot-4, 330-pounder who was slated to see action last season after enrolling in January, but his 375-pound frame and surgery for a herniated disk in his back ended the season before it even began.

Davis talked to the media on Friday after practice, and he was more than happy to talk about how he lost all of the weight and got in shape, and some of the answers were surprising, including the fact that he played a lot of intramural soccer in his down time.

“I played a lot of soccer when I was rehabbing,” Davis said. “I’ve played a lot since I’ve been here, and I’ve actually played since I was three years old. I missed two years when I took MMA [mixed martial arts] training. A lot of people can’t see that. But I play goalie and forward, and I played three years of high school soccer. I play forward more than goalie because I am a lot higher than most people expect.”

Davis said that he has no concerns about the health of his back heading into 2011.

“When I came into camp, they actually put me back on the field goal unit,” he said. “If the back can hold up to that, it can hold up to anything. Right now, I am playing a lot at left guard [behind David Smith

View Full Profile ], but I want to be wherever the coaches feel like I can help the team the most. We have to get the best five on the team.”

Head coach Dabo Swinney said Davis has been impressive so far in camp.

View Full Profile will make that same transition that Kalon has made. Physically, Region is not where he needs to be. But he can move. I'm proud of Kalon and our strength and conditioning staff and Loreto [Jackson] for what they did to get him to where he is.

“Kalon looks like a totally different guy on the field. I hope he'll be a great example for Region because I think Spencer Region has a chance to be a great player. That joker, right now, can move even at 300-plus, plus, plus. He's going to be a good one."

In fact, Davis has been talking to Region about losing weight and what it takes to be an offensive lineman on the collegiate level.

“I’ve been talking to him since his recruitment,” Davis aid. “The coaches felt like it was a good idea for me to work with him, and I can help him in whatever he needs to do. I have been there. I have to give a lot of credit to Dr. Jackson for the plan she put me on, and then my ability just to find stuff to do – just to be able to stay active and cut weight.

Davis said that missing the year hasn’t been a hardship, and allowed him to trim the excess pounds.

“I don’t feel like it was that much of a problem, because it helped me concentrate on my weight,” he said. “I can come in now with a chance to prove to the coaches that I can play and they don’t have to put all their hopes on a freshman and they can have confidence in me.”

He said he has already seen a difference on the field.

“It is like I am able to play more in space now,” he said. “Last year, I had to get out there and just stick to a side because I couldn’t react. Not I can get into a position to make the block that we need.”