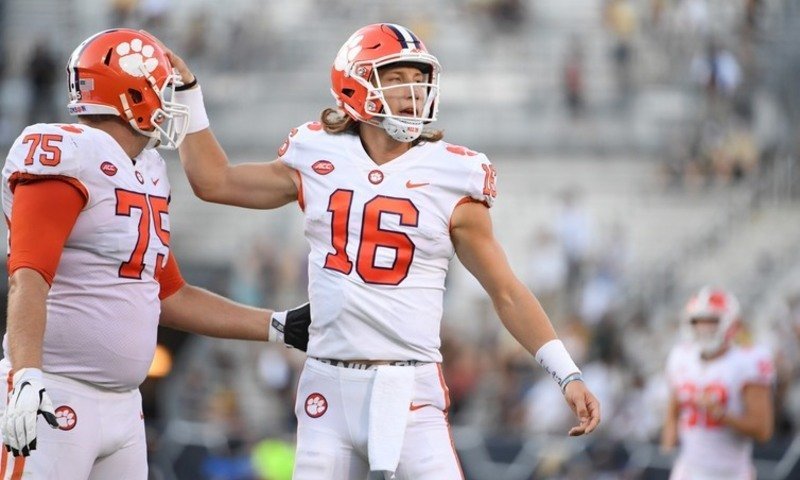 The Clemson offense was in another gear with Trevor Lawrence in rhythm on Saturday in Atlanta.

No. 2 Clemson’s defense took charge and freshman quarterback Trevor Lawrence took over as the Tigers romped over Georgia Tech in their road ACC opener Saturday, 49-21.

This season the ‘Second Look’ features the TigerNet staff grading Clemson as a group and offering some different perspectives on the action each week. Here’s our look at week four of Clemson football, where all three phases had their moments with the entire 72-man travel roster participating in a dominant start to conference action:

Trevor Lawrence’s talent has never been doubted since his stepping on campus in January (and well beforehand). What the coaches were looking to bring along was Lawrence’s experience and efficiency as the competition level increased this season.

Saturday versus Georgia Tech was a display in just how that strategy has unfolded quite well.

In week two, Lawrence hit a big opening-play touchdown against Texas A&M but didn’t carry out that kind of play over a game where Kelly Bryant took over and made enough plays in the Tigers' 28-26 win. In Atlanta, it was Lawrence’s turn to make his mark and position himself as the No. 1 QB moving forward. The production in his time on the field? Five touchdowns in six possessions, 9.6 yards per play and 5.8 points per drive. Conversely, Bryant’s saw one score in four possessions, 4.8 yards per play and 1.75 points per possession.

Lawrence’s comfort on the field was on full display. On the first touchdown, Lawrence changed up a call and had plenty of time to zip a throw to a corner of the end zone on the run for the TD:

On his second TD throw, Lawrence stayed patient on the run-pass option (RPO) call to see the cornerback having little safety-help and another talented freshman in Justyn Ross did the rest:

To end the first half, he displayed the full toolkit with a nice scramble for a first down, a bullet pass under pressure to Hunter Renfrow on the sidelines and a nice rollout connection to Amari Rodgers to help setup another score:

Add in an offensive line that kept Lawrence clean and opened up some holes for the ground game, an absolute man-on-a-mission in Travis Etienne with the running style he showed Saturday (topping 100 yards in a second-straight game) - plus Tavien Feaster coming on as a strong No. 2 back...and an array of top targets to throw to - and that equals an offense that showed it can get its yards and points on any opponent this season. And that particular level - from what we’ve seen so far - only comes with Lawrence at the helm thanks to kind of throws he can make to put stress on a defense. -- Brandon Rink

Defensive end Clelin Ferrell had “Boogeyman” written on his skull cap Saturday, and he told me after the game that is was a nod to the WWE wrestler of the same name. After a rough start on the opening drive Saturday, Clemson’s defensive line must have like a bunch of boogeymen to the Georgia Tech offense.

How bad did it get for Tech? Georgia Tech had 62 yards on the first eight plays of the game, then went backward. The Jackets had just 51 yards at the end of the first quarter, and gained only 24 in the second quarter. By the time the Jacket offense got the ball back in the third quarter it was 35-7 and the defense began to substitute liberally. The Jackets gained just 61 yards in the third quarter and 67 in the fourth quarter.

The defense also scored the game’s first touchdown – linebacker Tre Lamar had a jarring hit that forced the ball loose and a bevy of Clemson defenders tried to jump on the loose ball. Ferrell wound up with the football in the end zone for the defensive score. Tech had eight fumbles and lost only one and defensive back Mark Fields dropped what should have been an interception, but it was another dominant day for the defense. -- David Hood

.@ClemsonFB's defensive line was on a mission to score here, and Clelin Ferrell did.

After a week in which the special teams unit appeared to be off, they rebounded nicely Saturday evening at Georgia Tech.

Greg Huegel didn’t get the opportunity to kick a field goal, but he was perfect in his seven extra point attempts, leading me to believe that last week was an aberration, especially with the swirling winds that Florence sent to Clemson.

In the return game, Amari Rodgers continued his good work in averaging 16 yards per punt return. Cornell Powell was able to bring two kickoffs out of the endzone and averaged 29 yards per return. It will be interesting to see how many more chances Powell gets in the future with the new kickoff rules.

Punter Will Spiers showed some improvement Saturday afternoon, averaging over 40 yards on his three punts. This is the area Clemson needs to continue to work on because at some point, they will need to flip the field to give the defense room to work in a tight ballgame.