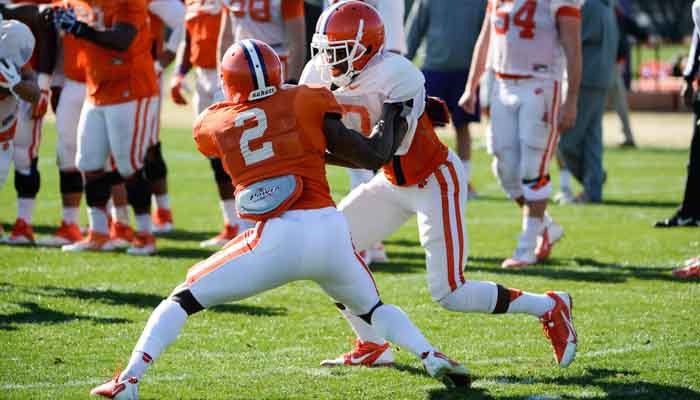 CLEMSON – The Clemson football team ran through the final scrimmage before Saturday’s spring game, scrimmaging for over two hours inside the indoor practice facility because of the rain.

“We were in the two-minute situation and going for the win, and I saw Mike had single coverage on the outside, so I looked off the safety and hit him for a big gainer,” Stoudt said after the scrimmage. “Two plays later, we kick the field goal and get the win.”

“It’s the only way we can evaluate them. But we saw a lot of good things,” Swinney said. “I thought the defense was really good. Overall, I was disappointed with our execution in certain situations. That kind of overshadowed the good things that we did. We had several penalties in the red zone, we had a personal foul penalty on the defense that continued a drive. We had two guys on offense in the red zone that didn’t know the play.”

*I asked Swinney about the secondary, and mentioned corner MacKensie Alexander

MacKensie Alexander
RS Fr. Defensive Back
#2 5-11, 185
Immokalee, FL
View Full Profile and the fact that I keep hearing his named mentioned whenever someone talks about the defense. Swinney then said that if the season started today, the pecking order in the back four might be a little surprising to people.

He said that Alexander and Cordrea Tankersley

Cordrea Tankersley
So. Defensive Back
#25 6-1, 190
Beech Island, SC
View Full Profile would start at the corner spots, while Robert Smith

Jayron Kearse
So. Safety
#20 6-4, 205
Fort Myers, FL
View Full Profile at free safety. Swinney then went on to say what he likes about Tankersley.

“The thing I like about him is that he cares,” Swinney said. “You can see it written all over him. He cares about being a great player, and he is so coachable. He cares about his teammates. We need more guys like that. I am really impressed with him.”

Swinney then detailed why Johnson is a little bit ahead of Kearse at this point.

“Jayron is doing fine, but he is in a real hot battle with Jadar,” Swinney said. “Jadar has had a great spring, and it has been fun to watch him. He came in last year and came in early and really struggled with the transition, his confidence and maturity. Fast forward a year, and he is as talented as anybody we’ve got. Everybody talks about Jayron, but Jadar is as talented as anybody we’ve got on that defense. He has every skill set you want for that position. It is a very competitive situation with those two right now.”

Grady Jarrett
Sr. Defensive Tackle
#50 6-1, 290
Conyers, GA
View Full Profile have each stepped into that role. He then said that while Jarrett isn’t a “rah-rah vocal guy” Anthony is.

“I could talk about Stephone every day,” he said. “He has thumb on everybody on the defense. He has really matured and stepped into that role. We think he is going to have a big year.”

Chad Morris
Offensive Coordinator / QBs
View Full Profile said that Stoudt and Kelly took most of the snaps. Watson walked off the field after practice holding his arm, but both Swinney and Morris said they didn’t think the injury was anything serious.

*Both Swinney and Morris said that the quarterback battle could last well into fall camp, and Morris laughed when one reporter asked if he would play two quarterbacks. Morris responded by saying that there are three quarterbacks in the battle.

Shaq Lawson
So. Defensive End
#90 6-4, 260
Central, SC
View Full Profile spoke with the media after the scrimmage and said he got two quarterback sacks, a far cry from last week’s scrimmage in which the defense didn’t register a sack.

Morris said that there were too many mistakes for his liking.