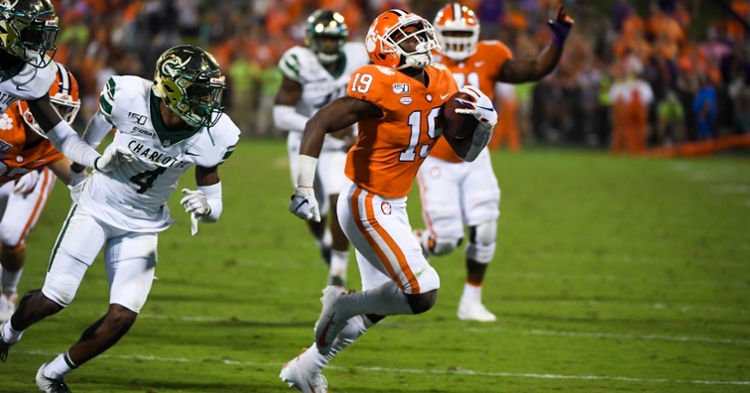 Reserve running back Mikey Dukes scores a touchdown against Charlotte.

CLEMSON – Clemson head coach Dabo Swinney didn’t waste any time getting his reserves into the Tigers’ 52-10 victory over Charlotte. Swinney and the coaching staff liberally substituted at every position on the field starting in the second quarter and played a program-record 111 players in the win.

That, says co-offensive coordinator Jeff Scott, is an example of Clemson culture.

Scott said the game is indicative of the culture at Clemson and pointed to starting wide receiver Tee Higgins as the perfect example of a selfless teammate.

“I think it's just the culture that we have. I went and asked Tee - I think he was in there for maybe 10 plays and it was early in the first quarter - and I went up to him and said, 'Hey, I think you're done. Let's let these other guys play and get some experience.' What those veterans know, it's very unique in the year 2019 to be at a place that has a culture where your starters aren't worried about their stats,” Scott said. “Trevor is honestly not worried about his stats. Travis is not worried about his stats. They've been a part of championship teams. These championship runs that we want to make, they know it's a long year, so this is an advantage.

“They can go in there and play well and then be able to get on the sidelines, rest up and let the other guys play. There is really none of that whatsoever. I went and asked Tee, 'Do you want to go one more series? I really think I want to go ahead and pull you out.' He said, 'Let Joe and those guys go play.' It's great to see the veterans stand up there and cheer and really been engaged and pull for that next group when they went in there. It means a lot to them.”

Clemson is a team-first program.

“I can't speak to the cultures at other places but you see a lot on the internet and on Twitter,” Scott said. “There is a lot of self-promotion and people worrying a lot about their own stats but here it truly is about the program first, team first, getting the win. Part of that is in recruiting. We make sure when we're recruiting guys that understand when they're coming in that it's about the team more than any individual. We're here to win games and develop a roster. I lost count of how many games we've played in the last three or four years, but if you play in the Playoffs and have those long runs, the season gets long and we want to be at our best if we earn that opportunity. Part of that is to developing your roster and rolling a lot of guys.”

Swinney said there are now a lot of players who can say they played a game during their time at Clemson.

“We’ve got a lot of guys who can say they played for the Tigers, and nobody can take that away from them,” he said. “They were rewarded for their hard work and had a chance to go out and play. That was pretty special.”

Playing so many players might not help in the stats department but it resonates on the recruiting trail.

“That is big. Any time we're recruiting wideouts, the number one thing some of the opposing schools may say is, 'Why do you want to go there? They've got a lot of guys.' I counter that and say, 'Well, we play eight or nine guys a game and we're going to have nine guys on scholarship so there are pretty good odds that you're going to get chance to play.' I can show them that as well,” Scott said. “I think when your head coach really supports playing a lot of guys. We've played a ton of freshmen already this year. It's great for a guy like Brannon Spector to get in there and get some good reps today even though he's a guy we're going to try and hold and redshirt. It's really good.”