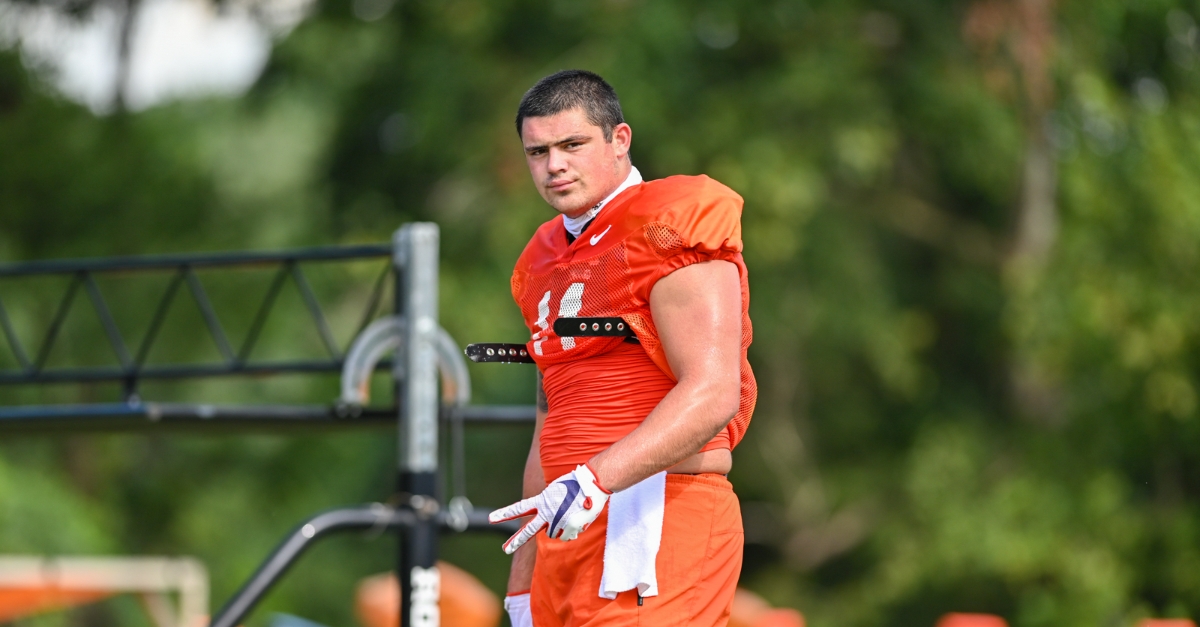 Bryan Bresee is as good as advertised according to the coaches.

Clemson scrimmaged for two hours inside Death Valley Saturday morning, and we have a ton of news and notes to send your way.

Head coach Dabo Swinney said the Orange won the day, while the first-team offense impressed and the second-team defense was impressive.

We will have more from Swinney later, but here are a few highlights, followed by Brent Venables and Tony Elliott.

*Fun to get in the Valley today. Something we have all been looking forward to.

*Travis Etienne was held out of scrimmage. "Got banged up the other day.”

*Fred Davis and Joseph Charleston had interceptions in the scrimmage. Cornell Powell had a great day for the offense with multiple touchdown receptions.

*Freshman WR Ajou Ajou injured his hamstring and was held out of the scrimmage.

*Dabo: "I thought Cornell (Powell) was the best player on the field today. He had three touchdowns."

*Said Brannon Spector also had a good day at receiver.

*Receivers Frank Ladson, Amari Rodgers and Joseph Ngata also all missed the scrimmage. Cornell Powell, Brannon Spector, Will Brown and Will Swinney were the starters.

*Said Clemson has had no one opt out of the 120 players.

*Calls his quarterback room as good as any in the country.

*Dabo says they are not that far in the planning but he believes the team will still run down the Hill before games.

*On the young secondary, he said it's been a group that has been fun to watch. Skilled with length and instincts. Likes to be coached.

*On the scrimmage today, said the defense was inconsistent and has a lot of work to do. They played with good effort and had some things to build on, but a lot of little mistakes. Guys need to step up. Justin Foster, Xavier Thomas, Kane Patterson, James Skalski and Mario Goodrich are all out. Baylon Spector was gimpy. He had some guys that ran around and hit and created turnovers. The young guys flashed. Have to improve communication pre-snap. Nowhere close to where they need to be.

*Says the four freshmen DL have all "been flashing" during camp. They performed well in a two-minute situation yesterday. Outstanding in short-yardage. The young guys had some great moments but lack experience here and there, but they are a group of guys that like to compete and like to practice.

*Mike Jones is the guy at the Nickel/SAM spot. Very confident. Took advantage of his time and is a detailed guy. Brent said he doesn't have to coach Jones hard.

*Bresee is learning more than one spot, has played and is comfortable at both end and tackle.

*On Myles Murphy, Brent says he is a little bit inconsistent but is more good than not. Has fast eyes. Very instinctual. Has natural power and explosiveness. "He knows what he is doing out there for sure, but he still has work to do."

*Malcolm Greene continues to impress. Sounds like this guy is gonna get on the field sooner rather than later.

*In trying to find another corner opposite Derion Kendrick, Brent said they are very inconsistent. Said Goodrich has been snakebit (injuries, sickness) and needs to play.

*Etinosa Rueben had scaphoid surgery and is out. He hasn't practiced yet. The other veterans at defensive tackle have been doing good. Nyles Pinckney is rusty and is getting back in shape. Darnell Jefferies has made improvement. Tyler Davis is faster. Ruke Orhorhoro needs to work on his consistency. Then says, "Bryan Bresee is as advertised from liking to play and to practice. He has really made some improvement in his fundamentals from the spring. As a group, they are going to be strong for us."

No better feeling than being back in the Valley! ???? pic.twitter.com/bcVwRk0HsG

* Elliott said that Taisun Phommachanh and DJ Uiagalelei are “neck-and-neck” in the backup QB battle. Phommachanh has been doing a good job despite being challenged and looks more comfortable in the pocket. Biggest thing to improve on -- and Elliott said is “understandable” -- is handling pass protection calls. He’s battling and not backing down. “More of a foundation” for DJ there from a high school offense similar to Trevor Lawrence. Says he’s excited to see the tape and says they both made the right protection calls.

* Elliott said he was “really, really proud” of Cornell Powell. “Probably had his best day since he’s been here.” Had to play a lot of plays and all three positions. Showed good chemistry with Lawrence. Spector continues to “quietly make plays” and he’s had to play a number of positions too. Braden Galloway had a solid day too.

* Elliott said the offense had a good start, good middle and didn’t quite finish how he would have liked in the scrimmage. Was a test for young offensive linemen having to mix and match in rotation and heat played a factor late.

* Elliott said Lyn-J Dixon is playing a lot more confident and fast. Looks composed in pass protection and understands the language better in the playbook there. Game’s really slowing down for Lyn-J. Hitting some home runs, but also being patient and dropping his pads. Looking like a veteran out there.

* On freshman RBs: Elliott said Kobe Pace looked really good between the tackles as a big, physical guy and did get to the edge a couple times too. Elliott said Demarkcus Bowman is more of a scrimmage type of guy. Back in his element and made some plays there and on kickoff returns. Pleased with where they are. Pass protection will be a learning process for both. Was encouraged to see them in the first scrimmage. Probably ahead of where typical freshmen are but still have a long way to go.

* So far, so good with three new starters on the interior offensive line. Elliott said center Cade Stewart has really accepted his opportunity as a leader and is doing awesome. Left guard Matt Bockhorst brings a nasty element. Right guard Will Putnam has quietly had a good camp. Being challenged. Proud of cohesion there. Elliott added that Bockhorst is one of the smarter O-linemen he’s worked with. Stewart is working well with Putnam having worked at that position before.

* Every day is a different lineup with receiver now with a “constant mix-up of receivers” dealing with issues of players out due to protocol in camp. Seeing players embrace their opportunity. Cornell Powell is working at 2-man (field) and 9-man (boundary). Elliott says Spector looks a lot like Hunter Renfrow in the familiar No. 13 jersey. “Bigger, just as quick if not quicker.” Very natural ball skills with better “top-end speed.” Not quite as savvy yet as Hunter because of experience .

* Elliott says practice has largely been the same this year but players do have to show up earlier for protocols to conduct meetings and practice.