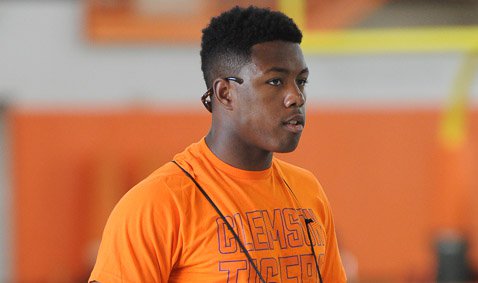 Register at a Clemson camp in June

Chris Register
Outside Linebacker
6-4, 210
Greensboro, NC
View Full Profile takes the field in the Shrine Bowl of the Carolinas next month, he will be following in the footsteps of his idols and hoping to set a good example for those that follow him.

The four-star (ESPN) linebacker and Clemson commit out of Greensboro (NC) Dudley found out last month – while walking to his class - that he was selected to participate in the Shrine Bowl, accomplishing a longtime dream to don that Tar Heel uniform in December.

Register recently told TigerNet that when he takes the field at Wofford’s Gibbs Stadium, he hopes to serve as role model to younger football players, just as some of the North Carolina and South Carolina greats did for him.

“I’m just going to have fun with it. It’s an event where you are supposed to have fun,” Register told TigerNet.” I want to be a role model to the people that want to do the same thing when they get to be my age, like the people who came before me – Keenan Allen, David Amerson. It’s a dream when you enter high school to play in this game, living in North Carolina and South Carolina. It’s a big honor for me.”

Soon after Register competes in the December 21st game, he will prepare to enroll in the spring semester at Clemson, and he said he is already getting a headstart on college credits, by taking classes at a local college.

“I’ve been thinking about what it’s going to be like when I get to Clemson, lately,” Register said. “It’s coming soon, too. I’m trying to graduate early. All of the work is already done. All of my high school classes are already done except for English four and I’m taking that online. I’m in a whole lot of college classes and I’m on a college campus right now.”

But first he has to finish out his senior season, as the Panthers try to continue their undefeated season.

However, Register said that his defensive line is making his job easy in 2013.

“Our team is doing great. We are 9-0. The defensive line is shutting everybody down and they are getting all of the tackles,” Register said. “They are making my job really easy. All I’m doing is reading it and covering up what they don’t get.”