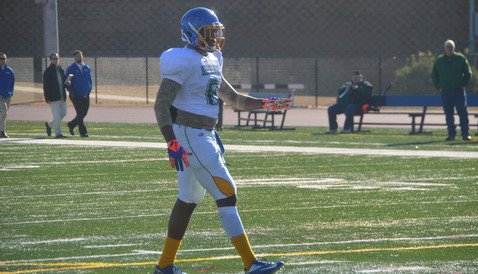 Register works out at the Shrine Bowl last week

View Full Profile , and January promises to be even better.

The 2014 linebacker commit out of Greensboro (NC) Dudley helped the Panthers finish off a perfect season with a 24-7 win over Scotland (Laurinburg) in the 4-A state championship game two weekends ago at Carter-Finley Stadium in Raleigh. It is the first state championship for Dudley since 2008, but it was the 11th time Dudley's defense has held an opponent to seven points or fewer this season.

Register was a big part of that defensive effort, but he also caught a critical 29-yard pass on fourth down that was a big play early in the contest.

“It’s fun. I’m just playing football. I’m just trying to enjoy my last days playing high school football,” Register told TigerNet last week. “It was emotional. Going into the game it was emotional being that it was our last game and our only chance to win the state title since I’ve been there. We’ve had chances, but I knew with this team that this would be our best chance. It was surreal. It felt like we just won a regular game and it took time for it to sink in.”

Register was also chosen to play in the Shrine Bowl of the Carolinas for the North Carolina team, and he had one tackle in the Tar Heels 29-23 loss to South Carolina last weekend.

He said he was trying to just enjoy the moment, and not look ahead to next month when he heads to Clemson to begin his collegiate career.

“I did. I just play. When it comes, it comes to me,” he said. “I don’t really ever look ahead. I just play for right now because you won’t ever get these moments back.”

I asked Register what he was most looking forward to a Clemson, and he said just playing the game.

Register then said that he chose Clemson because of Dabo Swinney

“I love the atmosphere at Clemson, and that is one of the first things that I loved about Clemson,” he said. “But Coach Swinney is like a father figure. He reminds me a lot of my high school coach. I see that in him and that’s why I trust him.”