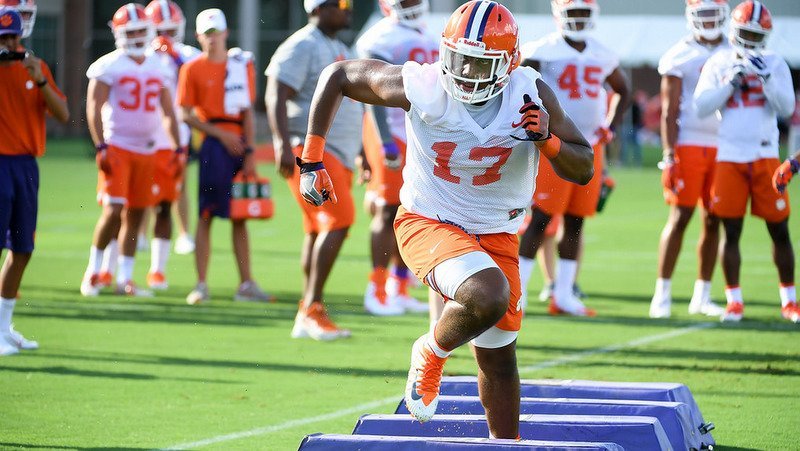 Justin Mascoll works out during practice

CLEMSON – With the new redshirt rule in place, Clemson head coach Dabo Swinney has gotten a glimpse of what the future holds for several key freshmen.

The new NCAA rule allows players to play in a maximum of four games and still retain their redshirt and Swinney and the Clemson coaching staff have used the rule to their maximum benefit.

Henry elected to redshirt after playing in four games and Mascoll has played in a game, but the coaches will prepare Mascoll to play in the Cotton Bowl and beyond.

“We can't play KJ Henry anymore, he's used his time up. We have three games left with Mascoll and we've kind of planned it that way,” Swinney said after a recent practice. “He's had a great year. He has physically developed and he's had all of the Power Hours. He has an incredible motor and mindset. I love what I've seen out of him on the scout team all year. He is ready every single day and he has grinded. He is going to be an outstanding player. He's a guy that we kind of moved up, and who knows if he will get the opportunity but we are going to have him ready. Fortunately, we are a pretty healthy team right now and he has got some good guys in front of him. But it's nice to have some guys like that, that we can get ready.”

“Jordan McFadden has gotten in two or three games. He's going to be a heck of a player. We hit a home run on that guy. He's got all the right stuff,” Swinney said. “Jake Venables and Mike Jones, both of those guys are going to be good players. They've both gotten in a couple of games and gotten a little bit of experience, so really excited about him.

“Darnell is making some strides. It was good to see him out there today doing some things. He's been in the weight room grinding. He's got a bigger butt on him now. We're kind of beefing him up a little bit.”

The playing time for the freshmen who weren’t able to redshirt has also been invaluable.

“Obviously, we didn't redshirt Kyler (McMichael) and Mario (Goodrich) but they've gotten some experience and have learned and have been in all of the meetings and that will pay off for them,” he said. “Same thing with a guy like Braden Galloway. Just looking at him out there today, he's going to be a great player. He needs another offseason in the weight room, but he's got the tools, the temperament, the mindset for it. He's in a whole other place than where he was when we started in August.”

Clemson signed one its top classes in history in 2018 and Swinney said he has no doubt that all of the freshmen will be ready to take the next step in 2019.

“We've developed a lot of guys who can functionally go play, but I think next year you'll see the benefits of that even more,” he said. “It's a really, really good group. I don't have any doubt that they'll be ready come spring.”