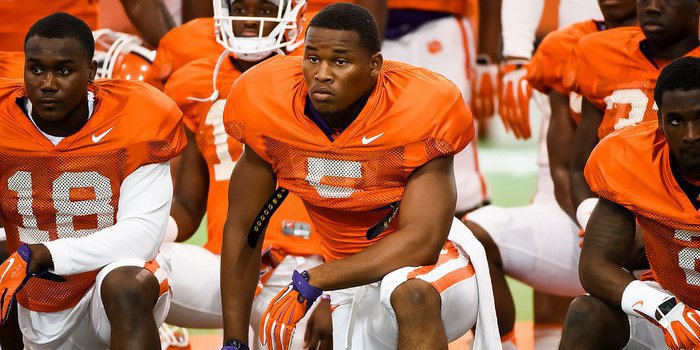 “Nyles Pinckney continues to shine and stand out. Jamie Skalski, it's good to see him get out there and get some scrimmage work. We had Gage Cervenka snapping. I was very impressed watching him snap yesterday. He's working guard and center. Getting those young tight ends like J.C. Chalk a bunch of good work. Shadell Bell, it's good for him as he's transitioning into that tight end position. T.J. Chase. Darien Rencher is a young running back. We moved Ty Thomason back there to running back. He had a nice play. Ryan Mac Lain. A lot of the guy's names you might not recognize, but we have fun with that. Trayvon Mullen is out there competing. The Tuesday practice in Arizona, we'll have another scrimmage opportunity.”

Here are Swinney’s thoughts on the rest of the defense, and we will run the offense Friday morning.

“He's going to be a great player. Progressing. Very focused. Very committed. Very coachable. I love his demeanor and the way he prepares.”

“Unbelievable semester. Made a 3.75 GPA. One of the best guys we had in Power Hour. Great leader. Just a magnet for guys on this team and such an example of how you respond to whatever situation you're in. He took this opportunity to get better and he has done that. Really, really proud of Shaq.”

“He's a work in progress. He's up to about 220. He's picked up some weight. He came in here right around 200. He's gotten stronger. He's putting in the work. I like his attitude. I like his demeanor. He's a high-energy, high-effort guy. He's just a guy that's got to continue to physically develop and if he will do that in time, he'll be a factor.”

“Special athlete. Really special athlete. Another guy that was kind wild in our Power Hour group. He looks good getting off the bus. He's going to be a good one.”

“Physical specimen. Was on the bubble of maybe playing but got hurt and had a setback, but has just done great. He's done great on the scout team and excellent in Power Hour. He's just physically really blessed. Explosive. Tremendous potential and high upside.”

“Same thing. Bigger. Stronger. Incredibly committed to the Power Hour. He's a little over 200-pounds now. He can run. He's one of our faster guys back there in the secondary. Very, very high football IQ.”

“Nyles is - I hate to put the tag on him, but he's a Grady Jarrett in the making. He's a grinder. He's a guy that cares an awful lot about being a good player and works hard at it. I think it was hard for him not to play but he took advantage of his opportunity and his body is better. He's stronger. He's healthy and he's a guy that's really going to help us.”